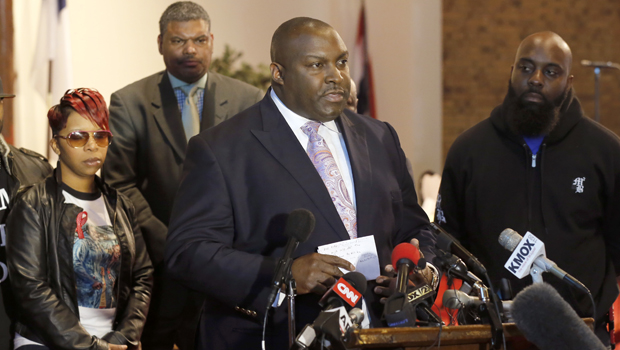 ST. LOUIS -- Lawyers for the parents of an unarmed, black 18-year-old who was fatally shot by a white police officer in the St. Louis suburb of Ferguson said Thursday that they would file a civil lawsuit in Michael Brown's death.

Attorney Daryl Parks said at a news conference in north St. Louis County that the City of Ferguson and former Officer Darren Wilson would be named in the wrongful death lawsuit, which they plan to file promptly.

The announcement came in response to the findings of a Justice Department investigation that charged the Ferguson police department with unfairly targeting blacks but cleared Wilson in Brown's death.

Brown's mother, Lesley McSpadden, and his father, Michael Brown Sr., attended the news conference at Greater St. Mark Missionary Baptist Church, but they did not speak nor take questions.

Parks said the DOJ report makes it clear there are "rampant, wholesale, systemic" problems in the Ferguson police department that need to "change soon for the safety of the citizens."

He did not say specifically when the suit would be filed. He said only that, "soon means soon."

While the Justice Department cleared Wilson of federal civil rights charges in the August death of Brown, it also called for sweeping changes in a city where officers trade racist emails, issue tickets mostly to black drivers that generate millions of dollars in revenue, and routinely use what investigators called excessive force on people stopped for minor or non-existent offenses.

Attorney General Eric Holder said Wednesday that the department "found a community that was deeply polarized; a community where deep distrust and hostility often characterized interactions between police and area residents."

"We must do better not only as a city, but as a state and a country," Knowles said.

The shooting of Brown sparked a national dialogue on race and law enforcement. Separate federal investigations into the shooting and the police department began soon after Brown was killed.