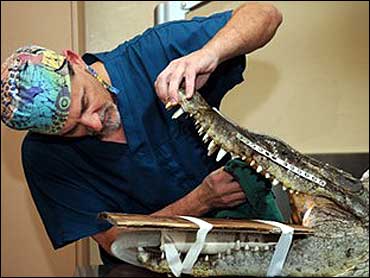 An American Crocodile that was run over by a car last year is now affectionately being called "Robo Croc" by his surgeons, reports Jawan Strader of CBS4 in Miami.

The vets installed four steel plates with 41 screws into the crocodile's skull in a procedure that's amazing zoo professionals.

"I've been at the zoo 30 years and it's one of the most incredible procedures I've ever been a part of," said Ron Magill, spokesman for Miami MetroZoo.

Local Video from CBS4 in Miami