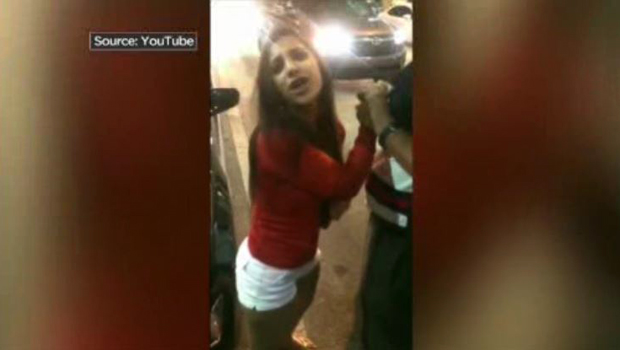 MIAMI -- A case of bad behavior has ended up as a viral video, CBS Miami reports.

A South Florida doctor was caught on camera physically and verbally attacking an Uber driver in the Brickell area of Miami.

The woman at the center of the viral video is Anjali Ramkissoon, a fourth-year neurology resident employed by Jackson Health System.

According to a statement from Jackson Health System, Ramkissoon "has been placed on administrative leave, effective immediately, and removed from all clinical duties." The statement goes on to say, "Jackson has launched an internal investigation. The outcome of the investigation will determine if any disciplinary action will be taken, up to and including termination."

The incident took place in the early morning hours on Sunday, and the video has been viewed hundreds of thousands of times since it was posted on YouTube two days later.

It was uploaded to YouTube by a poster named Juan Cinco, who said he had called for an Uber driver but when the driver arrived, "out of nowhere the girl in the video gets in the backseat of his car and won't get out. We told the driver it was ok, to just cancel our ride, but he did not want to take her anywhere so he kept telling her to get out."

In the video, Ramkissoon can be seen attempting to hit the driver and knees him in the groin. He pushes her off, and she falls to the ground then comes back for more, cursing at him and then taking out her feelings on his belongings. She's seen in the video throwing out various items from his car, including a master lock, which she hurls at him, scissors, a large amount of Uber fliers and his iPhone.

At one point, the driver appears to be speaking to someone on the phone, presumably to police.

Miami Police say they responded to a call of a disturbance, but did not arrest her. Juan Cinco wrote online that the driver did not want to press charges and that Ramkissoon gave him a small amount of money as an apology.

Internet users are demanding much more than that though.

Some are calling for her to be fired from her job at Jackson Memorial Hospital. Others have photoshopped photos and posted what appear to be fake images of her topless.

No one at her South Florida home would answer the door to comment on the incident.

Her neighbor, Ruby Ferro, told CBS Miami the behavior she saw in the video is nothing like the young lady she has known since she was a child.

"I just got surprised because they're a beautiful family," said Ferro. "Anjali and her sister, they're good girls. They're quiet people. They never have a problem."

Ferro is urging those who are basing their opinions of Ramkissoon from the one video to have a heart.

"You could be a beautiful person but one day you have a problem, the job or the family or the boyfriend, and you change that day. But that doesn't mean you're a bad person," said Ferro.

In addition to being placed on administrative leave at Jackson Health, Uber has suspended Ramkissoon's account and released this statement:

"Uber expects everyone associated with the platform - both drivers and riders - to conduct themselves with a shared level of respect and common courtesy, and all forms of harassment and abuse are not tolerated. We have suspended the rider account of this individual as we investigate the incident."