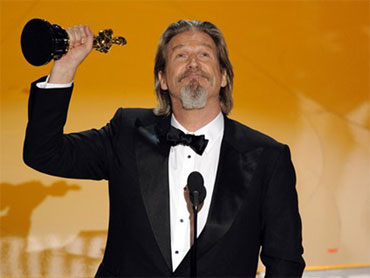 Jeff Bridges, who won Best Actor for playing a downtrodden country-western musician in "Crazy Heart," recalled one of his iconic characters, The Dude from "The Big Lebowski," when he described the ride of his four-decade career: "Strikes and gutters, man. That's about it."

Having inhabited dozens of characters over the years, Bridges said the Academy Award win may affect his anonymity as an actor.

"That's kind of tough. But the upside is, you know, hopefully this award will help bring peace and understanding and prosperity to our world, you know? Because, really, movies are more than just entertainment, they are connecting us. Music is the same way. We have, you know, a movie about music here, but music and movies are a common link for all of us. And I am hoping that this will kind of raise my profile, and I am all about getting us, you know, getting us all together, getting the world healthy."

Then, sounding somewhat Dude-ish, Bridges credited his family as his key for success. "First thing that pops into my mind is my wife, my support, you know? She holds that kite string. Lets me go way out there, and then it's so sweet being reeled back in. I love coming home. She pointed out the other day, we've been apart 11 of the last 14 months. So I went, whoo, really far out there! But my wife and my girls, I guess the girls are the tail of the kite, keep me centered like that."

When he accepted the award on stage, Bridges (whose father was actor Lloyd Bridges, star of the TV series "Sea Hunt" and the comedy "Airplane!") said, "Thank you, Mom and Dad, for turning me on to such a groovy profession. Oh, my dad and my mom, they loved show biz so much. ... I feel an extension of them. You know, this ... is honoring them as much as it is me."

When asked for advice for acting students "who want to be in your shoes tonight," Best Actress winner Sandra Bullock ("The Blind Side") said, "Well, don't aspire to be in these shoes. You know, walk in your own. I mean everyone's really good at telling everyone else how to live your life or how to be or how to do it- just don't listen. My mother beat it into our heads to be original, and I didn't understand that until later on. Everyone's unique and that's what makes people exciting to watch, I think, so just savor what you are and not what everyone else wants you to be."

Bullock also begged off explaining further her on-stage comment about George Clooney having once thrown her into a pool: "Yeah, see, I could have taken that moment and gotten him back; there was also Tom Cruise involved in that as well," she said, "and I told them one day, in a very public forum, I would get them back. But George looked so tired tonight. I saw his little eyes and said, 'I can't do it to him tonight.' You might want to ask George about that, see how much information he'll give! It was actually really funny, but not at the time. Ask George. It's George Clooney. It's what George does well."

Mo'Nique, the Best Supporting Actress winner for "Precious," was asked how an Academy Award might change her self-image. "You've often said you are not an actress, you're a standup comedienne. That's your baby, and you won't call yourself an actress," said one reporter. "Now that you've won an Oscar, are things going to change?"

"I am a standup comedienne who won an Oscar," she replied.

She also described her attire: "The reason why I have on this royal blue dress is because it's the color that Hattie McDaniel wore in 1940 when she accepted her Oscar (for "Gone With the Wind"). The reason why I have this gardenia in my hair, it is the flower that Hattie McDaniel wore when she accepted her Oscar.

"So, for you, Ms. Hattie McDaniel, I feel you all over me, and it's about time that the world feels you all over them. Thank you so much, baby. I love you."

When she was asked what she thought would happen to Hollywood actresses "if they had more natural figures and didn't shave their legs," Mo'Nique replied, "They'd win Oscars."

When asked about his experience of the long awards season; during which he picked up practically every award possible for his performance as an SS colonel in Quentin Tarantino's "Inglourious Basterds," Best Supporting Actor Christoph Waltz called it "Dizzying."

"It's mind boggling, it's fantastic, it's very intense. It takes a long time and I couldn't have possibly imagined that it would be like that. It was fantastic. Tomorrow I'm probably sorry that it's over."

Pete Docter, the director of "Up" (which won Best Animated Feature), was asked his advice for kids who might one day want an Oscar themselves:

"Well, get lucky," he said. "Beyond that, I'd say draw, draw, draw. I don't think there's anyone who's ever regretted being able to draw. It really helps you see the world, things that you might notice or might not notice otherwise. When you draw them, you put them down on paper. Suddenly they become clear and it's just a great way to amplify and visually see the world better."

"Beyond that, just do it. More than ever before, there is technology out there. Make movies and love what you do."

For Best Picture: "Up"

With the advent of "Avatar," Docter said, "As we move forward it seems as though the line between animation and real life is getting blurrier and blurrier. And I think as time goes on, that technology becomes cheaper and more accessible, you just see more of that out there. But no matter what technology comes new into the fray, it's always all about storytelling and characters, and that's why good writers and directors and actors will always be in need."

"Avatar" cinematographer Mauro Fiore acknowledged the sea-change marked by the movie's win for Best Cinematography. Shot digitally, it is the first time a movie has won the Cinematography Academy Award with no actual film spooling through a camera.

"I think it's a pretty amazing thing for me to be honored in this capacity," he said, "especially because this is an HD film and this is the first time that a film has won that has so much computer generated images and also live action together. So this is a huge revolution for the industry."

"I'd just like to dedicate this to the women and men in the military who risk their lives on a daily basis in Iraq and Afghanistan and around the world. And may they come home safe." - Kathryn Bigelow, upon winning the Oscar for best director for "The Hurt Locker."

"This has been such a dream, beyond a dream...We had this fantasy of making our film our way with the talent that we hoped to have and hopefully we would find a distributor and somebody might even like the movie. So to be standing here, this was really, truly, honestly never part of anything we even imagined in our wildest dreams." - Mark Boal, accepting the best picture award for "The Hurt Locker."

Few Surprises at Oscar Ceremony
Oscar Nominees: In Depth
Photos: Scenes from the Ceremony
A List of Oscar Winners

"I would like to thank what this film is about for me which are the moms that take care of the babies and the children no matter where they come from. Those moms and parents never get thanked." - Sandra Bullock, after winning the award for best actress for "The Blind Side."

"What we did with "Avatar," if you really look at it, we took things that are out there in the world every day, we just made them bigger, shinier. ... But all our inspiration comes from the real world. So if you really look, you can see all those things around you, and I would just encourage people to get out and look for it." - Joe Letteri, after winning the award for achievement in visual effects.

"I want to thank the Academy for not considering Na'vi a foreign language." - Argentine director Juan Jose Campanella, after winning the award for best foreign language film for "El Secreto de Sus Ojos."

"I would like to thank the Academy for showing that it can be about the performance and not the politics. ... Thank you so much to my amazing husband, Sidney. Thank you for showing me that sometimes you have to forgo doing what's popular in order to do what's right. And baby, you were so right." - Mo'Nique, after winning the Oscar for best supporting actress for her role in "Precious: Based on the Novel 'Push' by Sapphire."

"This is for everybody who works on the dream every day: precious boys and girls everywhere." - Geoffrey Fletcher, after winning the best adapted screenplay award for "Precious: Based on the Novel 'Push' by Sapphire."

"Never did I dream that making a flip book out of my third-grade math book would lead to this." - Pete Docter, accepting the best animated feature film award for "Up."

"A lot of people have said it to me 'You made me cry.' And it was only because I cried myself when I watched the movie." - Michael Giacchino, on his award-winning score for "Up."

"The biggest change this year, the best picture category has doubled. When that was announced, all of us in Hollywood thought the same thing: What's five times two?" - Oscars co-host Steve Martin.