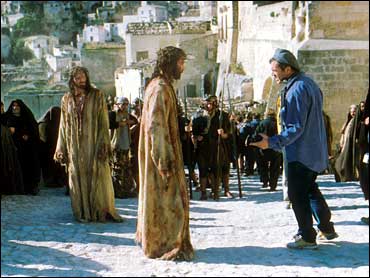 Those who have seen Mel Gibson's film about the final hours of Jesus Christ have called it beautiful, magical, a great and important work.

Those who think "The Passion" could fuel anti-Semitism, however, haven't been allowed to see the film. Seven months before its release, this extraordinary vanity project is stirring passions over Gibson's exclusionary screenings and the potential for a negative depiction of Jews.

Not just Jews are concerned — the film was first questioned by a nine-member panel that included Christians. Gibson is a member of an ultraconservative Catholic movement which rejects the Vatican's authority over the Catholic church.

Gibson has said the film is faithful to the account of the crucifixion in the four Gospels and is meant "to inspire, not offend."

The star of the blockbuster "Lethal Weapon" movies and Oscar-winning director of "Braveheart" has spent nearly $30 million of his own money to produce, co-write and direct "The Passion," starring Jim Caviezel as Jesus and Monica Bellucci as Mary Magdalene. Filmed entirely in the dead languages of Aramaic and Latin, it has yet to secure a distributor.

In recent weeks, the actor-director has been building support with invitation-only screenings for film industry insiders, conservative commentators, evangelical Christians and sympathetic Jews.

Trailers of the two-hour movie have turned up on some Web sites. A 4½-minute preview will air for tens of thousands of people attending a Christian festival this weekend in Anaheim, Calif.

Ted Haggard, president of the National Evangelical Association, saw a screening in late June with about 30 evangelical scholars. The scholars are very strict about adherence to scripture, so Gibson "had no assurances that we would be friendly toward that movie."

But Haggard loved it. "I thought it was the most authentic portrayal I've ever seen."

Cal Thomas, a conservative syndicated columnist, called the film "the most beautiful, accurate, disturbing, realistic and bloody depiction of this well-known story that has ever been filmed."

Internet personality Matt Drudge told MSNBC: "It depicts a clash between Jesus and those who crucified him and speaking as a Jew, I thought it was a magical film that showed the perils of life on earth."

But critics of "The Passion" — who have not seen the film — worry that the popular Hollywood superstar will attract millions to see a violent, bloody recounting of the crucifixion that portrays Jews as a frenzied mob eager to watch Jesus die.

"For too many years, Christians have accused Jews of being Christ-killers and used that charge to rationalize violence," said Sister Mary C. Boys, a Catholic professor at the Union Theological Seminary who read an early draft of the script. "This is our fear."

Boys and others on the committee of nine Christian and Jewish scholars that reviewed the script said Gibson may be skewing public opinion by screening the film primarily for conservatives.

"Why doesn't he show it to us?" said Abraham Foxman, the director of the Anti-Defamation League. "If in fact the film is a loving film, a sensitive film, I'll be out there proclaiming and saying it's wonderful."

Paul Lauer, marketing director for Gibson's Icon Productions company, said a screening will be held within a month for Jewish leaders, whom he would not name. He said Gibson first wanted to vet it before Christian scholars for accuracy.

Foxman, and those scholars who read the early script, will not be invited to future screenings, he said.

"We'd rather start from scratch with new people that we haven't had any bad experiences with," Lauer said. "We feel like we've been prejudged."

Lauer said the committee of scholars obtained a stolen, outdated script that is completely different from the rough cut of the film being screened. The U.S. Conference of Catholic Bishops issued an apology this spring after learning a staff member had obtained a draft, and the script was returned.

Boys said an Icon employee provided an intermediary with the script.

While Gibson said "The Passion" will be the most authentic account ever of the crucifixion, Boys said the script she read presented the Jews as more culpable for Christ's death than the Romans who executed him.

It only recounts the last 12 hours of Christ's life, she said, and therefore lacks the context to explain the Jews' portrayal. "It seems to me that the film looked on Jews as antagonists, Jesus as this perfect victim," she said.

Boys and others said they have received anti-Semitic hate mail after being quoted in news reports criticizing "The Passion." Rabbi Marvin Hier, dean of the Simon Wiesenthal Center in Los Angeles, said the center has received several dozen letters related to his criticism of the film.

Gibson said in a June statement that he and his film are not anti-Semitic. "My intention in bringing it to the screen is to create a lasting work of art and engender serious thought among audiences of diverse faith backgrounds (or none) who have varying familiarity with this story."

But what is Gibson's version of the story? His traditionalist religion rejects the reforms of the Second Vatican Council, which in 1965 rejected the notion that Jews were collectively responsible for killing Jesus. The actor is building a traditionalist church in Malibu, Calif., for about 70 members, and intends to hold Sunday services there in Latin.

His father, Hutton Gibson, was quoted in a New York Times Magazine article in March as denying the Holocaust occurred.

Meanwhile, film industry observers are wondering whether this film can find an audience.

Lauer said the film has not sought a distributor, but that at least three major studios are interested. Also, although the recent screenings have included English subtitles, Icon hasn't decided whether to include them in a major release.

"I don't know that he will be able to find a studio that will distribute this," said Kim Masters, a film columnist for Esquire Magazine.

Masters said industry people who have seen the film respect its quality, but said it is disturbingly graphic.

"It's not a family film, from what I understand," she said. "It's a really difficult film."