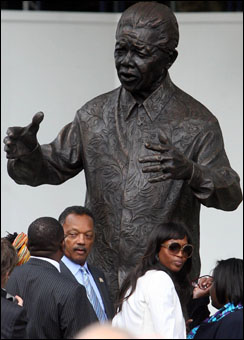 Two American biologists have discovered the world's smallest known gecko - a lizard so tiny it can curl up comfortably on a dime.

The Jaragua Gecko is the smallest of all 23,000 species of reptiles, birds, and mammals, researchers said.

Richard Thomas and Blair Hedges found the dark brown lizard on the Dominican Republic's remote Beata Island in 1998. Their findings appear in the December issue of the Caribbean Journal of Science.

The Jaragua Gecko measures only 1.6 centimeters - a sliver more than half an inch - from the base of its tail to its snout.

"We don't know if they get any smaller," said Thomas, of the University of Puerto Rico. "We suspect reptiles have a physiological limit and we are approaching that limit."

The geckos were found on a desert island also home to giant lizards known as rhinoceros iguana. The geckos are slightly smaller than a related species living several islands away in the British Virgin Islands.

Hedges, an associate professor at Penn State University, speculates the gecko may have moved across a land bridge between the main island of Hispaniola and Beata Island during the last ice age.

The tiny lizard is one of about 80 species of Caribbean gecko, a family of soft-skinned, insect-eating lizards that have short, stout bodies and suction pads on their feet. It's unclear how many Jaragua geckos exist in the world.

The environment probably played a role in how the lizard became so small, Hedges said. Over millions of years, they likely filled a niche held in other places by small insect-eating spiders, he said.

The scientists believe the lizard eats tiny ants, spiders and soil-dwelling mites. Its size makes it vulnerable to tarantulas, snakes, centipedes and even other lizards.

The lizard, whose scientific name is Sphaerodactylus ariasae, was named after Yvonne Arias, a biologist and president of the Jaragua Group, a nonprofit organization that helps preserve the Dominican Republic's Jaragua National Park, which includes Beata Island.

Arias said the island's remoteness - it takes five hours by boat to reach Beata, a desolate isle of coral rock and limestone where about 70 fisherman are the only human inhabitants - probably has helped protect the habitat.

"Pressure from ecological groups has protected Beata Island up to now," she said on a recent expedition where she found one lizard under a coconut shell and the other in a pile of dry leaves. "But we need more resources to educate people and to protect it."