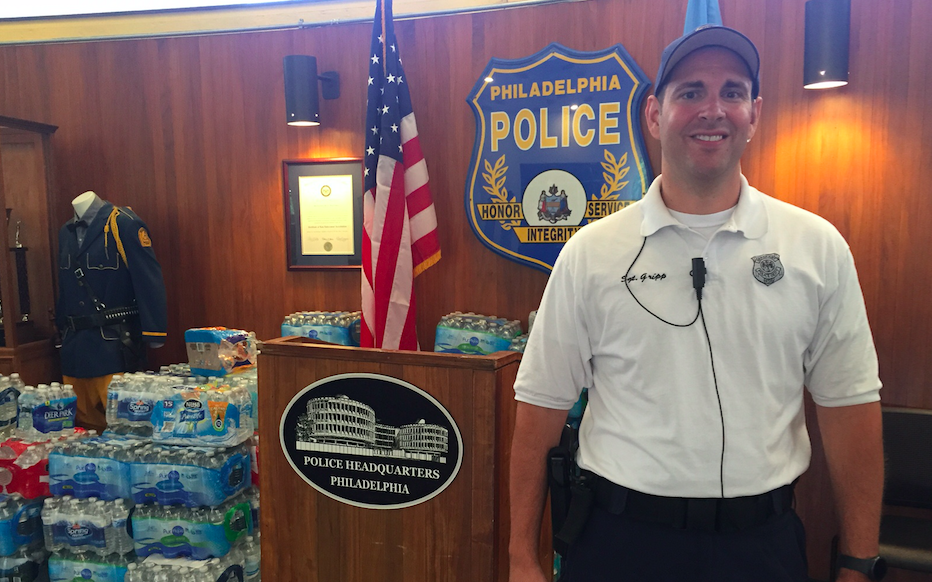 Sergeant Eric Gripp hit the streets of Philadelphia this week, armed with a cellphone and a smile.

To Philly residents, he's the voice behind the Philadelphia Police Department's social media accounts. To his fellow officers, he's simply known as "that Twitter guy."

From filming Facebook Lives on his bike in 100-degree heat with marchers carrying a 51-foot "joint" in the background, to posting selfies with members of the community on Twitter, the policeman and social media manager is becoming a popular face to see during the Democratic National Convention.

In fact, the videos he's posted the past three days have already garnered more than 260,000 views on Facebook.

"I'm just hoping that I'm able to cool things off a little bit between the community and the police, and make things a little easier for everyone out there," Gripp told CBS News. "I'm letting people know what's happening in real time."

Gripp landed the gig in May 2013 after his previous lieutenant from the 22nd District became the public information officer for the Philly police department.

"While we worked together, I was playing in a cover band and I used to handle the digital marketing for the band, which he thought was hilarious," Gripp explained. "We got into a conversation one day about the police department's social media and I said I thought it was terrible."

Six months later, his old boss gave him a call and asked him to interview for the social media position. And he couldn't be more thrilled.

His overarching goal from the beginning was to make officers as approachable as possible.

He's hoping to break that barrier by posting playful videos, responding to concerns from citizens and relaying information in a social media-friendly way.

"We have to keep up with the way the world is going," he said. "You're not making a phone call anymore, half the time you're not even sending a text -- you're just posting stuff on social media."

That includes posts about Kanye West, Gripp joked, recalling a status in February that went viral with nearly 10,000 shares on the department's Facebook page. Posting about job openings within the department, he wrote:

"We're hiring Police Officers, and we did the math. With a starting salary of $47,920, Officer West could be completely debt-free by the year 3122! And that's only if he were never to receive a single raise! With a few promotions and cost of living increases, Yeezy could probably break even in a quick 500 years." Gripp included a picture of West's face Photoshopped onto a police officer's body.

"Anything that I do online, I try to keep it as conversational as possible," Gripp said. "I'm glad that we're moving the department forward as far as our presence on social media. I look forward to what's in store."