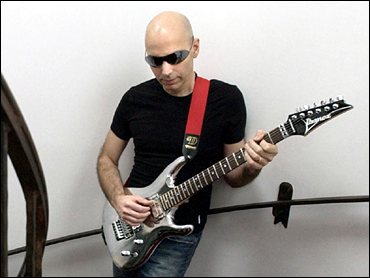 Guitar virtuoso Joe Satriani knows a thing or two about Grammy nominations, but he knows nothing about winning one of the music industry's highest honors.

Even his friends have poked fun at his Grammy-less streak, comparing him to soap opera star Susan Lucci, who finally won a best-actress Daytime Emmy after losing for 18 years straight.

After 12 nominations and no award, he wasn't expecting to break his losing streak with this year's nomination for best rock instrumental performance for "Starry Night."

"Since 1988, I've gotten nominations for every record. About five or six years into it, somebody brought up Susan Lucci and it sort of stuck," Satriani said in a phone interview. "Now every time Grammy time comes around, my friends start saying, 'It's Susan Lucci time.'"

Satriani, who was born in New York in 1956, first established himself on the San Francisco music scene during the early 1980s as a guitar instructor. He quickly became one of the most recognized teachers in the area, attracting students such as Metallica's Kirk Hammett, Larry LaLonde of Primus and acclaimed guitarist Steve Vai.

He released his first all-instrumental EP, the self-titled "Joe Satriani," in 1984. Two years later, "Not of This Earth" won critical praise and an immediate fan following. 1987's "Surfing With the Alien" is one of the few all-instrumental albums to reach the Top 40.

Besides the Grammy-nominated "Starry Night," songs on "Strange Beautiful Music," Satriani's 11th album, include "Chords of Life" and "Seven String."

"The last record had me exploring an organic rock and roll band sound with sort of hyper-melodic songs. I want to maintain a rock 'n' roll vibe," said Satriani, when asked about his next CD.

"A lot of the songs I'm writing now are heavy in the rhythm guitar department. So the next record may be a stronger, harder, more gritty kind of thing from the guitar part of it."

1. After the success of Santana's Grammy-winning "Supernatural," would you consider pairing with vocalists?

Satriani: I'm not quite sure it would be as artistically satisfying because I really do concentrate on development of melody and harmony. I just really like focusing on that. So I need a lot of time and control to work on the compositions on the records.

But having said that, it's difficult to shake a stick at selling 15 million records and the artistic freedom that follows that. Record sales generally purchase you this huge artistic license to do whatever you like for the next couple of records. That would always be great.

2. Do you find it odd that you've taught some of the biggest names in the industry and they've become more of a household name than Joe Satriani?

Satriani: I don't find it odd at all. It's like me asking, 'Do you know who Bill Gates' professor was?' Civilization moves forward because the students leapfrog the teacher. If the greatest achievements stopped with the teacher, we'd be in deep trouble. Once the elders passed away, we'd be finished.

3. What approach do you take with your students?

Satriani: When you're a teacher and you see a 16-year-old Kirk Hammett sitting across from you and he wants to know what key is this in and how can I make a really cool song, you really have to surrender everything you know. ... You hope someday they pass it on to the younger generation. That way things move forward and we can hope there will be a new Jimi Hendrix every generation.

4. How do you choose your next project?

Satriani: There are so many projects that I have written down in this book I carry around with me. It's in a little tattered book that seems to follow me around the world. It's been with me for a long time and some very cool records have come out of that little book. Halfway through a tour promoting one record, I start to think about what I'm going to do next and I pull out the book, add to it and then review the crazy schemes I've come up with.

5. Where do you get the comfort to try new things?

Satriani: It's probably just in my nature to be that way. Part of me can't help but notice that some of my contemporaries, not just guitar players, have a hard time doing the same thing over five years let alone 20 years.

We can't help but notice what our next-door neighbor is doing, and you make a judgment on it. You think, `Would I do that? Is that fun?' Maybe it's like how I got attracted to snow-boarding. It looked fun, I loved it, and I keep doing it. The same thing happened with the guitar. So I'm off on this journey to do it as many different ways as I can think of.