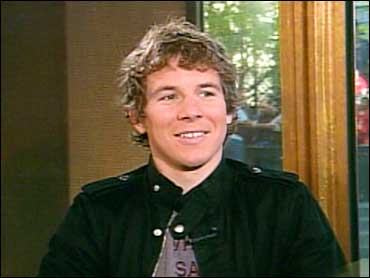 Last week, Jon Peter Lewis, or JPL, gave it his all during his performance on FOX's "American Idol" - but it just was not enough for the judges or the home audience.

That did not leave Lewis discouraged. He tells The Early Show co-anchor Rene Syler, "I don't feel bad about my performance or about having been in front of the camera - in front of 30 million viewers for five weeks in a row."

The 24-year-old was the second oldest contestant of "American Idol's" final eight. At first, he was voted out of the top 32, but later was able to advance through the wildcard round, only to be eliminated again last week.

"That's the way it works," Lewis says. His exit, however, was not so pleasant. He received his share of harsh criticism from judge Simon Cowell, who called the performance "amateurish."

Lewis tries not to put too much weight on Cowell's words. "At other times you just think, 'Well, is that right? Is that honest? I mean, is that true?' And then if you think so, then you take it to heart. But if not, you don't worry about it," he says.

Some of the criticism he has actually taken to heart, he says. "I think they call it like they see it. That doesn't mean that I agree with what they say. But, it definitely means that [you need to ]take it into consideration as something you'd want to change."

The greatest thing that has come out of his experience did not happen in front of the cameras. He says, "A lot of my family has come together. I've seen a lot of my family that I haven't seen in years. Like my cousins have come to the show. I haven't seen them, like, in 10 years. I had a couple of aunts that didn't do a lot of talking to each other. Now they are on each other's e-mailing buddy list, which is really cool. It's really fun."

Before "Idol," Lewis was working in a nursery, selling plants to pay his bills. He always hoped to become a pediatrician. Now that he is eliminated, he plans on pursuing his singing career and hopefully one day become a singing doctor.

He says, "I would like to go to medical school. But right now, what's best for me and what's the next step, I don't know. I'm not exactly sure what the future holds. I just want to work on an album and try and get this all, you know , keep the ball rolling, I guess."

Asked who he predicts will win, Lewis says, "At this point, it's hard to say who will win because it's so unpredictable." As for who has been getting strong performances, he says all of them.

"I'm going to be diplomatic on this one because I don't think it would be fair to them if I picked one over the other. I still have to work with them," Lewis says.