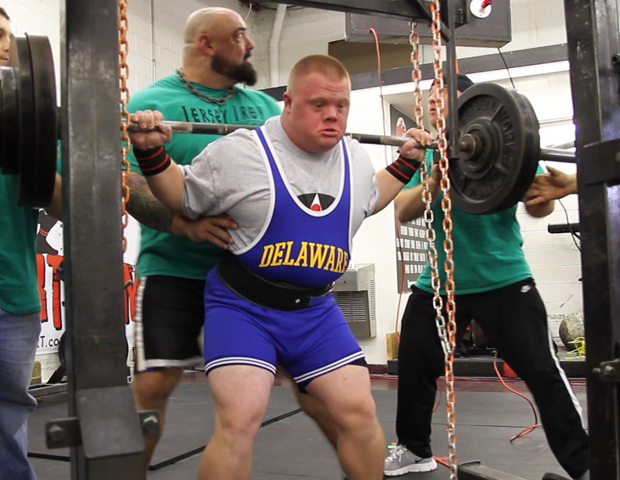 (CBS News) WILMINGTON, Del. -- Jonathan Stoklosa is a young man who has incredible power -- the power to lift your spirits and just about anything else. We met him "on the road."

Unlike most super heroes, Jonathan, 31, still lives with his parents.

"Come on!" shouted his mother from upstairs in their home.

And unlike most super heroes, Jonathan doesn't wake up ready to save the world.

"Were you sleeping?" his mother asked him as he came down the stairs.

And unlike most super heroes, Jonathan was born with Down syndrome. Nevertheless, he's still one powerful crusader.

By day, Jonathan is a mild-mannered bag boy at the Acme grocery store in Wilmington, Del. Caped in a neon-yellow vest, he rescues stray grocery carts from the parking lot and hands out stickers to the kids he meets along the way.

He's tender on the inside, yet a solid rock on the outside with his strong physique.

And it's at the gym, where Jonathan unleashes his inner Hulk.

"Argggh!" he roared as he flexed his muscles to us. He does that every time he gets a win.

"You walk away going, 'Wow.' Or 'Did I really just see what I just saw?'" said Brandon McGovern, Jonathan's trainer.

He said he's constantly amazed at Jonathan's drive. "He's a competitor," McGovern said. "He strives to be as good as he can be at whatever he puts himself into."

Of course, the real heavy lifting was done years earlier by his parents, Liz and Hank Stoklosa. They never coddled Jon. They raised him same as their other boys. Great things were simply expected. Although they have to admit they do pinch themselves now at how well it all worked out.

"Not even ever thought of when you hold a little baby and they tell you he has Down syndrome," said Hank about Jonathan being admired by so many people. "Yeah, Jon changed our life."

They're especially proud that he tries just as hard on his job as he does at his sport. His boss said you couldn't ask for a better employee. Yes, he's strong enough to bend a cart, but he's never so much as bruised a banana.

We asked him if he never crushed some eggs? "Oh, please," answered Jonathan, laughing.

A superhero with a soft touch, who actually takes your groceries to the car. Damsels are gonna love him.