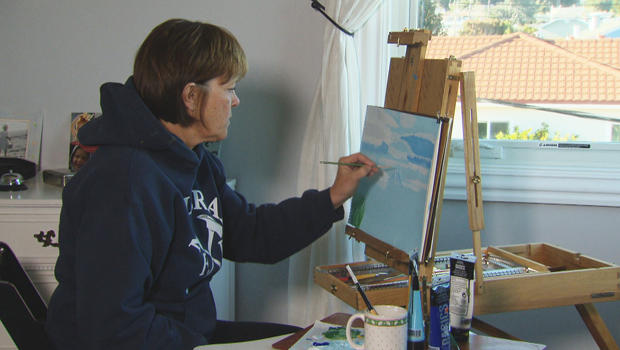 Dustin Hoffman won the Oscar for Best Actor for his portrayal of a savant in the 1988 film "Rainman." Susan Spencer introduces us to several real-life savants:

Ione and Steve Kuhner have been happily married for 42 years. But in 2013, they got some shattering news: Ione, then 57, was diagnosed with Early-onset Alzheimer's. "It was devastating for both of us," she said.

For the past six years, Steve has watched Ione gradually lose her grasp on much of daily life. But, to his amazement, he has also seen her gain something entirely unexpected: Ione has started painting, something the former dental assistant had never even thought about doing before her illness.

"Once I finish one, I want to start another one," she laughed. "And I finish that and start, you know, another one."

It may seem like an obsession. But neurologist Bruce Miller, who directs the UCSF Memory and Aging Center in San Francisco, calls it "her new occupation."

He's uncovered an unexpected and remarkable connection between savants and dementia patients, who (like Ione) suddenly exhibit new talents.

Spencer said, "So, they would have trouble communicating, but they could pick up a paintbrush and paint?"

"Yes," said Dr. Miller. "Some of the most beautiful art I've ever seen has come out of my patients with degenerative diseases."

Dr. Miller's office is a small gallery of his patients' artwork. One painting was by someone who had never even visited an art museum.

In his research, Dr. Miller compared brain scans of dementia patients with those of a child savant: "We are seeing the same pattern of loss of function on the left side of the brain, [with] increased function in the right posterior parts of the brain, the parts that allow us to take something visual in our mind and put it on a canvas."

His conclusion: In these rare dementia patients -- so called "acquired savants" -- the disease that destroys some brain areas activates others, unlocking hidden talent.

"It very much has humanized my patients for me," Dr. Miller said.

Faced with an uncertain future, Ione seems to finds solace in her art ... and her paintings are still full of life.

Spencer asked, "Fifteen years ago, do you think you could have done this?"

And when asked if the brain ever ceases to amaze him, Dr. Miller laughed, "Never! Never!"

​Cowboy cook Kent Rollins at home on the range