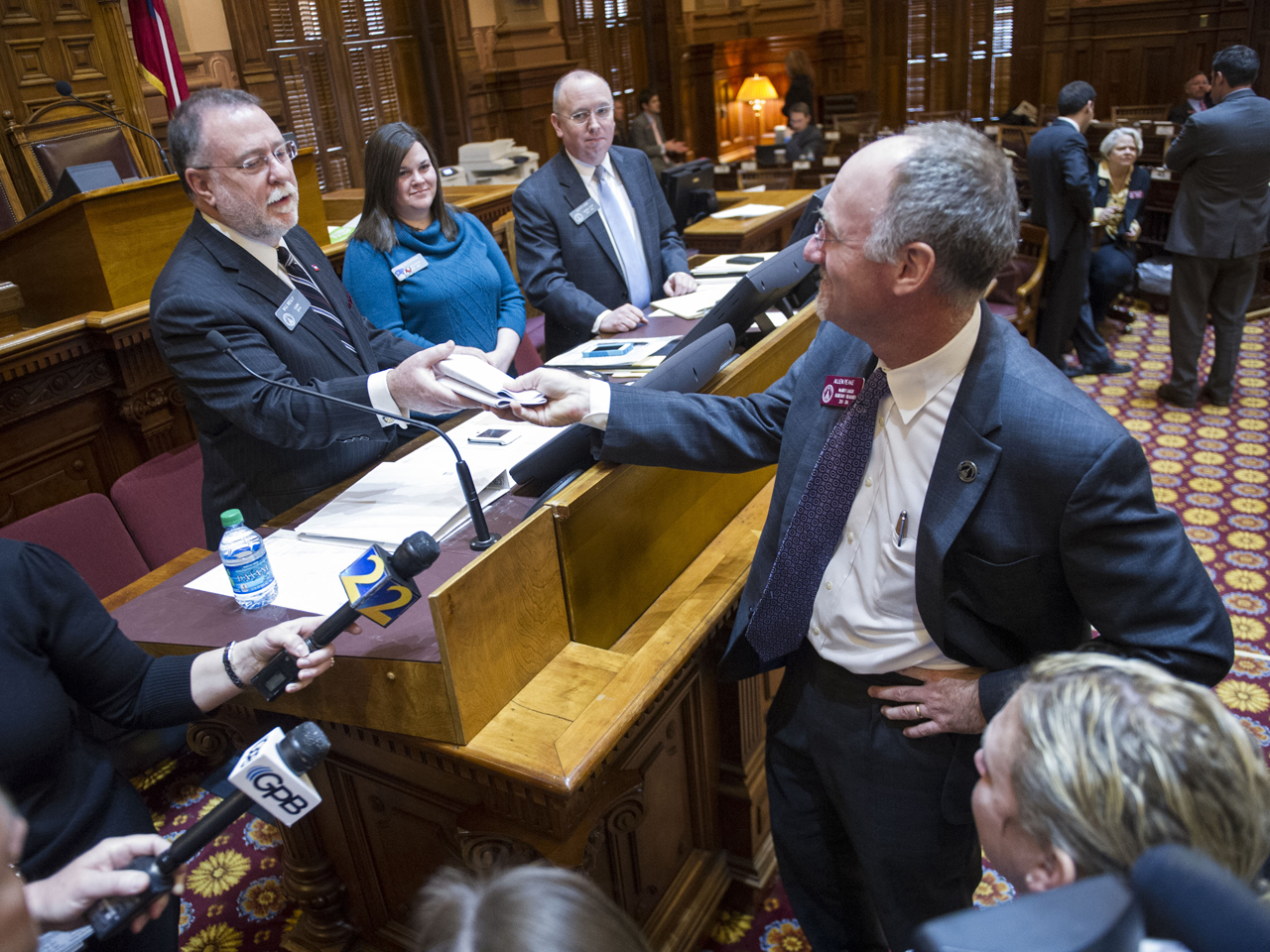 ATLANTA - Medical marijuana has been a non-starter in recent years in the Deep South, where many Republican lawmakers feared it could lead to widespread drug use and social ills. That now appears to be changing, with proposals to allow a form of medical marijuana gaining momentum in a handful of Southern states.

Twenty states and the District of Columbia have legalized medical marijuana, and this year powerful GOP lawmakers in Georgia and Alabama are putting their weight behind bills that would allow for the limited use of cannabis oil by those with specific medical conditions. Other Southern states are also weighing the issue with varying levels of support.

The key to swaying the hearts of conservative lawmakers has been the stories of children suffering up to 100 seizures a day whose parents say they could benefit from access to cannabidiol, which would be administered orally in a liquid form. And proponents argue the cannabis oil is low in tetrahydrocannabinol, or THC, the psychoactive compound in marijuana that makes users feel high.

"I'm an unlikely champion for this cause," said Georgia Rep. Allen Peake, a businessman from Macon who attended the evangelical Dallas Theological Seminary. "Once people realize it's not a 6-year-old smoking a joint, most folks realize this is the compassionate thing to do."

Peake's bill has already earned the backing of more than 80 state lawmakers, including several members of the House Republican leadership, who signed on as co-sponsors and the state's largest professional association of doctors. The bill would revive a long-dormant research program allowing academic institutions to distribute the medical cannabis and would be "limited in scope, tightly restricted, well regulated and managed by doctors," Peake said.

Alabama Rep. Mike Ball, a retired hostage negotiator for the State Patrol, is behind a bill that would allow people to possess the cannabis oil if they have certain medical conditions. It passed a key committee vote on Wednesday.

"The public is starting to understand what this is," said Ball, who chairs a powerful House committee and is a prominent voice on law enforcement issues. "The political fear is shifting from what will happen if we pass it, to might what happen if we don't," Ball said.

The bills in Georgia and Alabama still have more vetting, and their ultimate prospects are not certain. But what is happening offers a strong signal of what's to come in other states.

In Louisiana, although a bill has yet to be introduced, a recent committee hearing at the Capitol on legalizing medical marijuana drew a standing-room-only crowd, and Gov. Bobby Jindal made comments last month indicating he was willing to consider it.

"When it comes to medical marijuana ... if there is a legitimate medical need, I'd certainly be open to making it available under very strict supervision for patients that would benefit from that," Jindal said, according to a report in The Advocate.

Technically, both Georgia and Louisiana have laws on the books from the 1980s and 1990s that allow for the use of medical marijuana, but those programs essentially ended before they could start. Georgia's law established the academic research program for those diagnosed with glaucoma and cancer patients undergoing chemotherapy and radiation, but the program stalled when the federal government stopped delivery of legal cannabis.

Louisiana's law allowed for glaucoma and cancer patients and those suffering from spastic quadriplegia to receive marijuana for therapeutic use but regulations to govern the program were never developed.

In Mississippi, Republican state Sen. Josh Harkins of Brandon is sponsoring a cannabis oil bill similar to the ones in Alabama and Georgia. Harkins said one of his constituents has a 20-month-old daughter with Dravet syndrome, a form of pediatric epilepsy, and the oil can help reduce the number of seizures.

Elsewhere, both Kentucky and Tennessee have medical marijuana bills under consideration although they have yet to gain traction. Kentucky Senate President Rover Stivers, R-Manchester, has said he's not convinced marijuana has legitimate medical purposes and called it an area ripe for abuse.

In Florida, it's likely to become a campaign issue in the fall given that Gov. Rick Scott is up for re-election and a proposed constitutional amendment will be on the ballot that would allow for the medical use of marijuana as determined by a licensed physician. Former Republican Gov. Charlie Christ, now a Democrat seeking to challenge Scott, has called it "an issue of compassion, trusting doctors and trusting the people of Florida."

Meanwhile, Alabama Gov. Robert Bentley has signaled a willingness to discuss medicine that might be derived from marijuana with appropriate federal regulation.

"If someone wants to use the medicine that is in marijuana, go through the same testing that you have to go through when you do that through the (U.S. Food and Drug Administration), you go through all of that, do the testing, the drug testing, that's fine," Bentley said last month. "I have no problem with that. I am not just for prescribing marijuana."

Georgia Gov. Nathan Deal has declined to take a position, but noted the "strong case being presented by some of the families with very serious situations involving their children."

Dustin Chandler, a police officer in Pelham, Ala., has been a major part of the effort there. His daughter, 2-year-old Carly, has three to five seizures each day from a severe neurological condition she has had since infancy. Chandler believes cannabidiol could help control his daughter's seizures and improve her cognitive functioning based on anecdotal evidence seen elsewhere.

"We've been battling the stigma from the m-word," Chandler said. "I'd love to hear my daughter talk. I'd love to hear her say one word. You know that is something most parents take for granted."

Overall, public opinion in support of legalization has shifted in less than a decade, according to William Galston and E.J. Dionne, who co-wrote a paper last year on the topic for The Brookings Institution. The authors noted proponents were shrewd in focusing the earliest campaigns on efforts to allow the use of marijuana for medical purposes, citing a 2013 Pew Research Center survey that three-quarters of Americans, including 72 percent of Republicans, believe marijuana has legitimate medical uses.

Among critics' biggest concerns is that allowing medical marijuana even under a narrow list of circumstance would eventually open the door to widespread use. Peake, the Georgia lawmaker, has been adamant that will not be the case.

"I am concerned as anyone that we would get to a slippery slope of a broader scope of marijuana use in the state," Peake said. "I promise you I will fight that with every bit of energy in me."

Georgia Rep. Terry England, chairman of the powerful House Appropriations Committee and a deacon at his Baptist church in Auburn, is a prime example of a state lawmaker who never thought of legalizing medical marijuana but is now open to it, even signing on as a co-sponsor to Peake's bill.