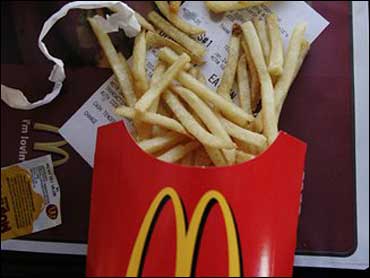 While it has developed a healthier new oil, the company is still not saying when it will be used in all 13,700 U.S. restaurants. It already trails competitors in committing to a zero-trans fat oil.

Spokesman Walt Riker said the oil is currently in more than 1,200 U.S. restaurants after extensive testing, but declined to provide details on timing or locations.

"We can confirm that we've got the right oil," he said. "We're phasing it in."

The choice of a new oil comes as McDonald's and others face a July 1 deadline to begin complying with an ordinance passed by New York City last month making it the first U.S. city to ban all restaurants from using artificial trans fats.

Oak Brook, Ill.-based McDonald's has said for months it would comply with such a ban, and said it would introduce any new oil nationwide rather than have a separate oil for its New York restaurants. But it had not confirmed that testing was complete.

Riker said the new oil is canola-based and includes corn and soy oils.

The Chicago Tribune, which first reported McDonald's decision on a new oil Sunday, said the company has tested 18 varieties of oil in more than 50 blends during the last seven years.

McDonald's had been under pressure for moving more slowly than smaller rivals Wendy's International Inc. and Yum Brands Inc.'s KFC and Taco Bell to rid its oil of the artery-clogging trans fats.

A public health advocate who has criticized McDonald's fries as nutritionally "disastrous" applauded its move toward a new oil.

"So many people eat there that making this change can really provide a significant benefit to the public's health," said Michael Jacobson, executive director of the nonprofit Center for Science in the Public Interest. "It also reconfirms with the restaurant industry that trans fat is a real problem and now even the biggest chain is beginning to deal with it. Hopefully now the smaller chains and mom-and-pops will also get rid of it."

The $22 billion company was especially cautious after reneging within months on a September 2002 pledge to introduce a new oil, citing concerns about changing the taste of its fries.

"It's just taking a little bit of time because as we move forward we don't want to jeopardize the iconic nature of the french fry, which as you know is so very important to our brand," Chief Executive Jim Skinner told an investor conference in New York two months ago.

The company uses a healthier oil blend in some countries overseas but says regional differences in agricultural production require development of different blends.

McDonald's has not identified the test markets the latest oil was used in. Riker denied that Phoenix was among them, as the Tribune report said.

Shares in the company rose 30 cents to close at $43.23 on the New York Stock Exchange.