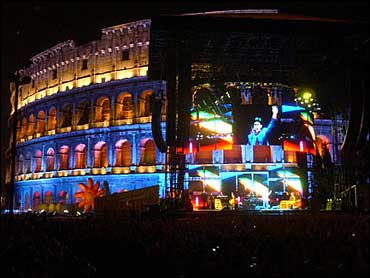 After the patricians, so to speak, turned out for an exclusive benefit performance by Paul McCartney inside the Colosseum, Sunday was a more plebeian affair, as hundreds of thousands of fans flocked to a free concert by the former Beatle outside the ancient arena.

Some fans started staking out places in early morning under the hot sun, some 12 hours before the concert started in an area flanking Rome's ancient forums. By performance time, Via dei Fori Imperiali, a broad boulevard which cuts through the remains of Rome's ancient forums, was jammed.

Against the backdrop of the Colosseum, which was bathed in colored light, the singer charmed the crowd, ranging from youngsters to nostalgics in their 60s who were among the Beatles' first fans.

Late Saturday night, inside the ancient arena, McCartney played his acoustic guitar and sang classic Beatles tunes, including "Yesterday" and "Hey Jude." A few hundred people paid up to US$1,490 each for a ticket to the concert inside the Colosseum, which is rarely open for performances.

"As you can imagine, this is a magnificent occasion for us," McCartney said, apparently awed by the setting — the ancient gladiatorial stage bathed in multicolored lights and covered in wafting smoke. "I keep wanting to look around."

Profits for Saturday's show were going to Rome's archaeological offices and to Adopt-a-Minefield, the anti-landmines charity backed by the singer and his wife. The event brought in just over $287,000.

McCartney's "Back in the World" tour is his first in Europe in a decade.