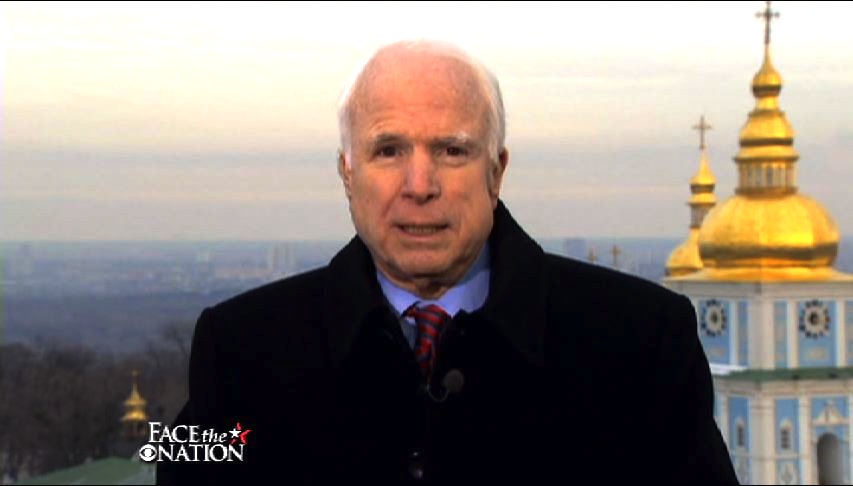 Sen. John McCain said anti-government protesters in Ukraine want to “look to the West” and align themselves with the European Union instead of Russia to improve the country’s economy.

The Arizona senator was interviewed on CBS’ “Face the Nation” from Ukraine, where he is traveling to support Ukrainians protesting the decision by President Viktor Yanukovych to back away from an agreement that would solidify political and trade connections with the European Union. More than 200,000 people gathered in the central square of Kiev, the country’s capitol, to continue a demonstration that has lasted nearly four weeks already.

McCain said Ukraine is both strategically and geographically important to the U.S. “It is a large country, it is a cultured country, it is the beginning of Russia which a lot of people don’t know and what’s happening here is not only a desire to be part of the European Union which makes them look to the West and not be coerced into the customs union that the Russians and [Russian President Vladmir] Putin are trying to push them into but they are tired of corruption, they are tired of a bad economy,” he said. “They really want change and that change is epitomized by a turning to Europe and a relationship with Europe that they think will benefit them and their lives.”

Sen. Dick Durbin, D-Ill., said Ukraine has struggled internally since the fall of the Soviet Union.

“There are ethnical, cultural and religious connections with Russia and Moscow.  And then, there are those in Ukraine looking to the West for their future.  Yanukovych is caught in the middle.  And at this point, he has to decide,” he said.

“It's fairly clear to all of us in the West where their future lies, and I certainly hope the people in the streets of Kiev will get the message clearly through Yanukovych,” Durbin added.

Gates: NATO expansion "changes the geopolitics of Europe in a dramatic way"