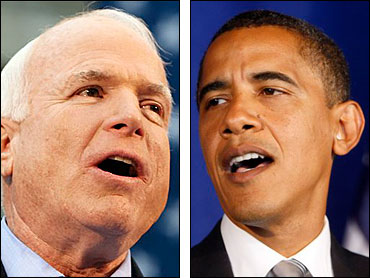 "I call on Congress to get back obviously immediately to address this crisis," he added. "Our leaders are expected to leave partisanship at the door and come to the table to solve our problems. Senator Obama and his allies in Congress infused unnecessary partisanship into the process."

McCain spoke a few hours after the House defeated bailout legislation. He called on lawmakers to get back to work immediately to address a crisis that he said could affect every family and small business.

Obama said he's confident Congress will eventually work out a bailout for the hobbled financial industry even though the House rejected the latest plan.

"I'm confident we're going to get there, but it's going to be rocky," Obama said in Colorado. Obama said he talked with Treasury Secretary Henry Paulson, House Speaker Nancy Pelosi and other leaders, who were trying to figure out the next step.

"One of the message I have for Congress: Get it done," Obama added.

"The failure of the House vote is a sizable blow to John McCain's campaign," said CBSNews.com senior political editor Vaughn Ververs. "He tied himself to this effort in a very public and dramatic way last week when he suspended his campaign and his surrogates were already trying to claim credit for him when it appeared that a deal had been struck. Now that it has gone down, he's going to get some blame as well."

In a press conference call for the McCain campaign, senior policy advisor Doug Holtz-Eakin placed blame for the break down on "partisan attacks" made by House Speaker Nancy Pelosi(D-Cal.) on the floor before the vote.

"From the minute John McCain suspended his campaign and arrived in Washington to address this crisis, he was attacked by the Democratic leadership: Senators Obama and Reid, Speaker Pelosi and others," Holtz-Eakin said in a statement. "Their partisan attacks were an effort to gain political advantage during a national economic crisis. By doing so, they put at risk the homes, livelihoods and savings of millions of American families."

"This is a moment of national crisis, and today's inaction in Congress as well as the angry and hyper-partisan statement released by the McCain campaign are exactly why the American people are disgusted with Washington," Obama-Biden campaign spokesman Bill Burton said in a statement. "Now is the time for Democrats and Republicans to join together and act in a way that prevents an economic catastrophe."