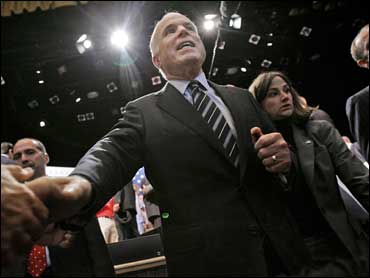 With voters sour on the status quo, Republican John McCain plans to spend the next five months arguing that he has a history of fighting to reform government and that Democrat Barack Obama talks of change with nothing to show for it.

"I have a record of doing that, not a rhetoric of doing that," McCain told an audience last week, claiming he long has taken a bipartisan approach to fixing the country's ills while suggesting that Obama simply offers empty promises of working across party lines.

McCain will start making his case in earnest Tuesday during a prime-time speech in the New Orleans suburb of Kenner, La., a searing symbol of government inaction after Hurricane Katrina. It's meant to coincide with the final Democratic primaries in South Dakota and Montana and, thus, mark the start of the general election.

The Republican nominee-in-waiting plans to draw contrasts with Obama on a range of issues and argue that the Democrat offers the wrong kind of change while he offers the right kind. An advertising campaign is expected to reinforce that message in the coming weeks.

Previewing his remarks, McCain told reporters on his campaign bus in Nashville, Tenn.: "The message is change. It's real change. I think it's clear I have a record of working across the aisle. Senator Obama does not. I think it's my record of reform and efforts to change the way we do business in Washington. He has the most liberal voting record of any senator in the U.S. Senate."

An Obama spokesman responded by arguing that despite McCain's "occasional independence" from the GOP, he has embraced most of President Bush's agenda. "No matter how hard he tries to spin it otherwise, that kind of record is simply not the change the American people are looking for or deserve," Bill Burton said.

For weeks now, Obama has been portraying McCain as a Washington insider who offers nothing more than a third term of Bush and a continuation of partisan politics that turns off people.

"I will leave it up to Senator McCain to explain to the American people whether his policies and positions represent long-held convictions or Washington calculations, but the one thing they don't represent is change," Obama said recently.

By any measure, McCain faces difficult odds in an environment favoring Democrats; much of the country disapproves of the direction the country is headed amid a weak economy and the Iraq war. Given such conditions, it's hard for even some Republicans to see how the party retains the White House.

Nonetheless, Republicans say they still see a path for McCain to satisfy the public's hunger for change.

They point to his carefully honed image over decades as an independent thinker who has broken with the GOP's right flank on issues that include the funding of embryonic stem cell research, an eventual path to citizenship for most illegal immigrants and the push to get money out of politics. They argue that his work with Democrats on those and other topics, like fighting climate change, as well as his seemingly one-man crusades against issues like wasteful government spending, shows he's not a politics-as-usual candidate.

Still, McCain faces hurdles as he tries to market himself as a change-agent given that he's seeking to succeed an unpopular fellow Republican. While McCain and Bush differ on some policies, both are on the same page on Iraq and on the cornerstone of the current economic policy - extending the president's tax cuts.

McCain's time in Washington presents another challenge. He has served in Congress since winning a House seat in 1982; he was first elected to the Senate in 1986.

Obama was elected to the Senate in 2004 after serving in the Illinois Legislature since 1996.

Still, he has worked with Republicans to pass legislation that would expand U.S. cooperation to destroy conventional weapons and that would create a database of information on federal spending. And in Illinois, he successfully co-sponsored major ethics reform legislation and helped pass an overhaul of the state's troubled death penalty system.

During the primaries, Obama won over legions of voters with his pitch about a bipartisan type of politics to change Washington, while Democratic rival Hillary Rodham Clinton, a New York senator and former first lady, was less successful in her attempts to use experience to counter his pitch.

McCain may have more luck.

An AP-Yahoo News study found that as of April, people who favor a Washington outsider who will change the way things are done split about evenly between McCain and Obama, while those who favor someone with Washington experience slightly favor McCain. However, those who are optimistic that things can actually be changed in Washington favor Obama over McCain by a large margin (43 percent to 31 percent), while those who are pessimistic over whether Washington can change favor McCain over Obama by an even wider margin (43 percent to 23 percent).

Countered Kevin Madden, a former aide to Republican Mitt Romney: "There is a canyon between Barack Obama's rhetoric of change and what he's ever achieved, whereas John McCain can point to a long record of accomplishment and having led the charge of reform-minded change.