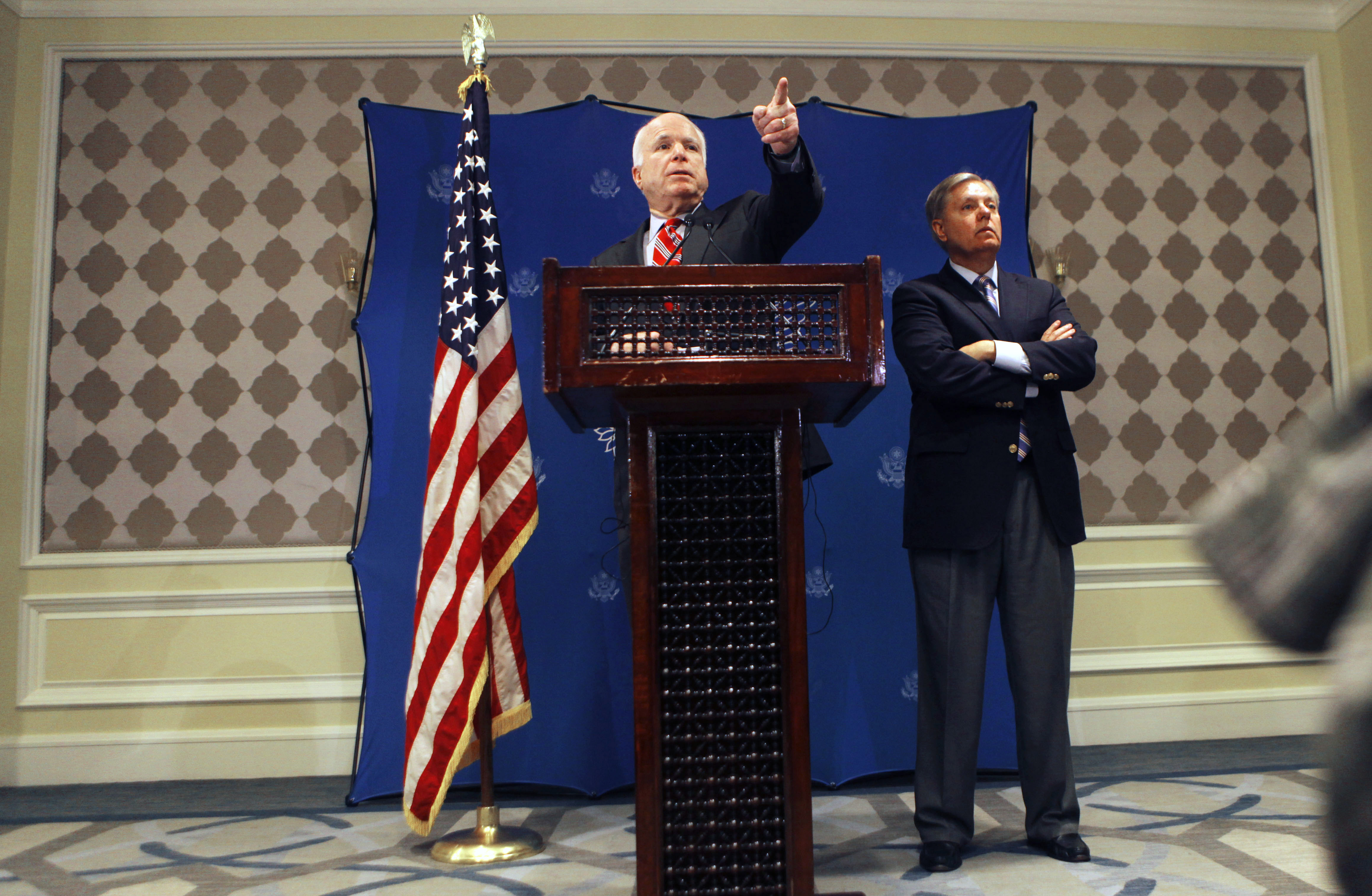 After meeting with Egyptian leaders from across the political spectrum, Sens. John McCain, R-Ariz., and Lindsey Graham, R-S.C., on Monday urged the military-backed government there to release political prisoners, begin the process of reconciliation and move towards an open democracy - or risk losing international aid and support.

"There are many in Congress - not many yet - there are some in Congress that want to sever this relationship," Graham said in a press conference with McCain in Cairo. "We want to maintain it because it is so important to our two nations and, quite frankly, the world."

That said, he added, the United States will only be able to support a democratic Egyptian government.

"The relationship of the past is no longer available to us in America," Graham said, referencing past U.S. support for ousted Egyptian autocrat Hosni Mubarak. That relationship was not beneficial to the Egyptian people, he said, but "the politics of convenience are behind us in America."

McCain and Graham traveled to Egypt at the request of the White House to urge political leaders to reconcile.

"Democracy is the only viable path to lasting stability," McCain said. "That means more than elections -- it means democratic governance, an inclusive political process in which all Egyptians are free to participate."

The senators called on the armed forces and the Muslim Brotherhood to refrain from violence and urged the government to set a clear timetable for amending Egypt's constitution. Legitimate reconciliation would require releasing political dissidents from jail, they said.

"If you think you can negotiate with people in jail, you're making a huge mistake," Graham said.

But even though U.S. law calls for the government to cut off aid to any nation whose military overthrows a democratically elected leader, Graham said he still considered aid to Egypt "one of the best investments" that America can make in the Middle East. In order to convince their colleagues in the U.S. Congress of that, Graham said, "We need progress, we need transition, and we need it soon."

Graham added that a failed Egyptian state is his "worst nightmare," calling the nation "the heart and soul of the Arab world."

McCain said the two senators were not there to negotiate with Egyptian leaders but were there as "longtime friends" to urge them to avoid further violence and chaos.

"We are here to move forward," he said. "The events that have taken place. We want to express our support, our friendship, our appreciation and our knowledge of how important Egypt is to the world."