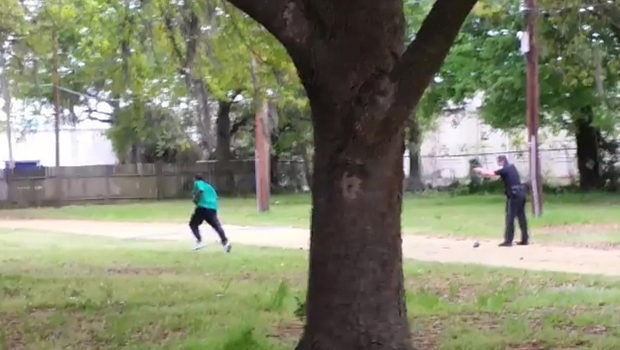 NORTH CHARLESTON, S.C. -- A South Carolina police officer who fatally shot a man during a traffic stop in an incident captured on video is being charged with murder, CBS affiliate WCSC reported.

North Charleston Patrolman First Class Michael Slager, 33, is facing the charge in connection with the Saturday morning shooting death of 50-year-old Walter Scott. He was being held without bond Tuesday night, according to WCSC.

The video was provided to CBS News by a lawyer for Scott's family.

The footage appears to show the officer shooting towards Scott's back at least eight times as Scott ran away. A deputy coroner wasn't immediately available to confirm how many times Scott was hit, according to the Post & Courier newspaper.

Officer Slager is white; the victim, Scott, was black.

The shooting occurred as heightened scrutiny is being placed on police officer shootings, particularly those that involve white officers and unarmed black suspects.

North Charleston police said the incident began around 9:30 a.m. Saturday when Slager attempted to pull Scott over because of a malfunctioning brake light. According to WCSC, Scott fled, resulting in a foot pursuit.

At a press conference Tuesday, North Charleston Mayor Keith Summey said someone recorded video of the incident which was sent to Scott's family and the South Carolina State Law Enforcement Division (SLED).

"As a result of that video and bad decisions made by our officer, he will be charged with murder," Summey said.

"When you're wrong, you're wrong," the mayor added. "When you make a bad decision, don't care if you're behind the shield or a citizen on the street, you have to live with that decision."

Watch the video at left to see the raw footage. Warning: It contains graphic content.

Slager's attorney dropped him as a client Tuesday, a day after he had released a statement saying the officer felt threatened and that Scott was trying to grab the officer's stun gun.

"This is a terrible tragedy that has impacted our community," the attorney, David Aylor, said.

According to a police report obtained by CBS News, Slager said he had deployed his stun gun before requesting backup. He said, "Shots fired and the subject is down, he took my Taser," according to the report.

Scott was found with at least one stun gun projectile still attached to him, WCSC reported.

"What he did do was not proper action," Mayor Summey said, regarding Slager's conduct. He also thanked the anonymous bystander who recorded the video.

Anthony Scott, the victim's brother, told reporters at a news conference Tuesday night that the video proved that the shooting was unjustified.

"From the beginning when it happened the first day, all we wanted was the truth. I think through the process we have received the truth," said Anthony Scott, while surrounded by other family members. "We've all seen the video. If there wasn't a video, would we know the truth? Or would we have just gone with what was reported earlier? But we do know the truth now."

Anthony Scott said his brother was the father of four children and had served in the U.S. Coast Guard.

"I had two brothers, now I have one brother," he said "He knew family I didn't know, he had friends I didn't know. He was just an outgoing type of person, loving and kind. That was his nature. And he loved the Dallas Cowboys."

L. Chris Stewart, an attorney representing the family, also praised the person who recorded the video.

"As you can see, the initial reports stated something totally different," said Stewart. "The officer said that Mr. Scott attacked him and pulled his Taser and tried to use it on him. But somebody was watching. There was a witness that came forward with the video and the initial reports were wrong, and that doesn't happen all the time across this country."

South Carolina State Rep. Justin Bamburg, who is also a lawyer, said the shooting makes the case for legislating funding for body cameras to be worn by police officers.

"It is very arguable that with body cameras, we won't have to depend on the courage of a random stranger with a camera to come forward," Bamburg said.

Stewart added that he expects the family will eventually file a lawsuit.

"What happened in this case is not acceptable in South Carolina, nor is it reflective of our values or of the way most of our law enforcement officials act, and I assure all South Carolinians that the criminal judicial process will proceed fully," Gov. Nikki Haley said in a statement. "This is a sad time for everyone in South Carolina, and I urge everyone to work together to help our community heal."

WCSC reported that court documents show two prior complaints filed against Slager, including one in 2013 which involved the officer's use of a stun gun on a suspect. Slager was cleared in that incident.

If he is convicted of murder, Slager faces the death penalty or 30 years to life in prison.