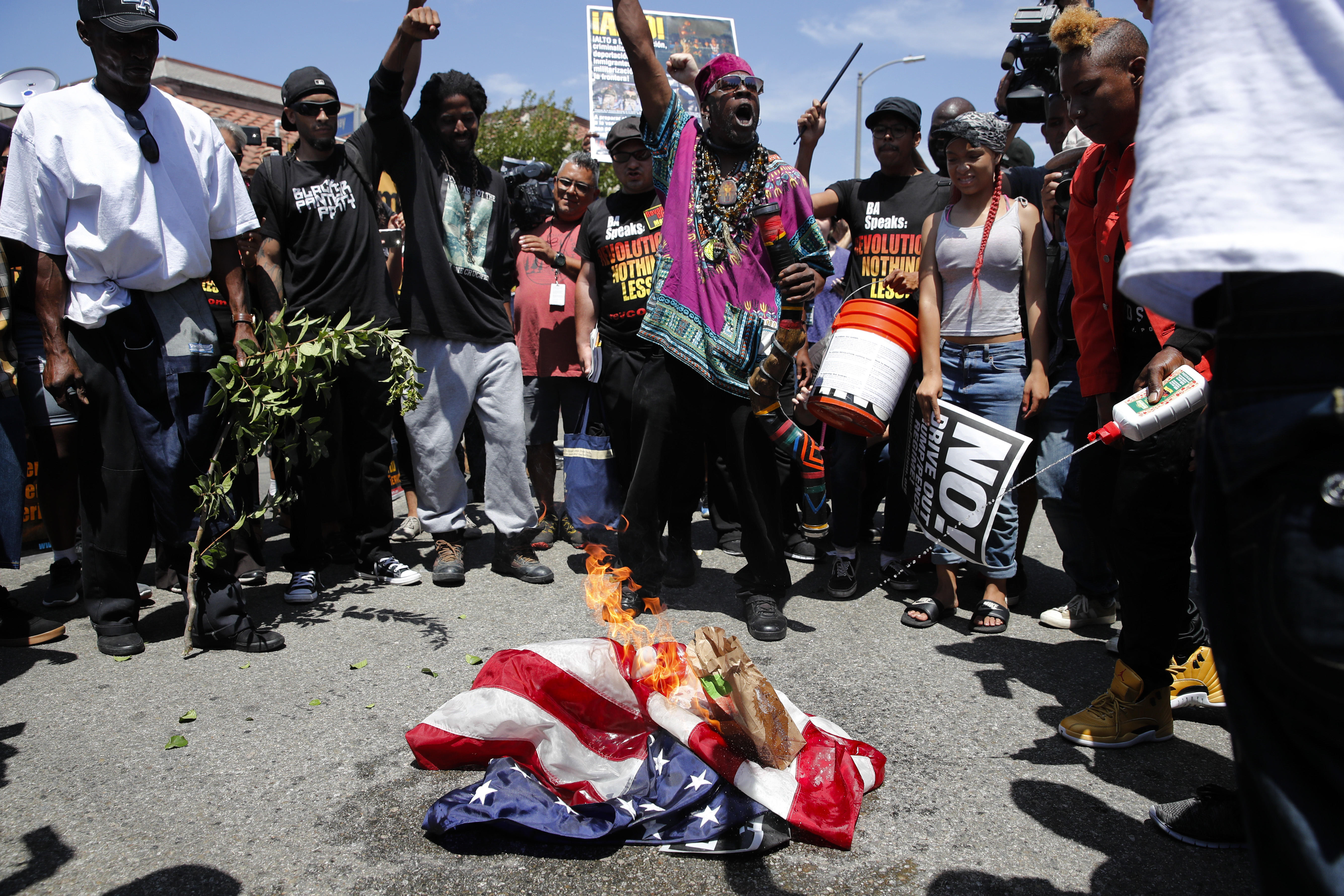 LOS ANGELES -- A small crowd that gathered Thursday outside the Los Angeles office of U.S. Rep. Maxine Waters, D-California, to counter an expected protest by a self-styled militia group burned an American flag taken from the back of a pickup truck. The incident happened after the far-right Oath Keepers group didn't appear at the office after saying it would rally against the congresswoman.

A group of counter-protesters there to support Waters were chanting "black power" and other slogans when the pickup approached.

The vehicle, occupied by two men who appeared to be white, was stopped by the crowd. Some marchers opened the doors and one grabbed the flag flying on a pole in the bed of the truck, which sped off.

The flag was stepped on and lit on fire as someone stoked the flames. A few people cheered and someone yelled, "This is not the American flag, this is their flag."

No one was injured or arrested. Police wouldn't immediately say whether they were investigating.

Attempts to reach a representative for Waters were unsuccessful. Ahead of the protest, Waters had warned counter-protesters to stay away. She said in a statement that the "Oath Keepers would like nothing more than to inflame racial tensions and create an explosive conflict in our community."

"We're not out here to hate and fight," South L.A. community activist and mainstay "Sweet Alice" Walker told CBS Los Angeles. "We out here to show Maxine Waters we love her, but not to do nothing wrong!"

The congresswoman, an outspoken critic of President Trump, sparked anger among conservatives after she called on the public to "push back" on administration officials spotted in public.

The Oath Keepers called Waters a "protest terrorist inciter" and said members intended to "stand against terrorism, stand for freedom of speech and association, in support of ICE/Border Patrol as they enforce constitutional immigration laws."

The gathering was planned for the early afternoon but police said then that authorities had been informed by Oath Keepers that the demonstration was called off.

"The Oath Keepers would like nothing more than to inflame racial tensions and create an explosive conflict in our community," Waters said in a statement a day earlier urging counter-protesters to stay away.

"These people are coming here to cause problems," said Cliff Smith, an organizer with United Union of Roofers Waterproofers and Allied Workers Local No. 36. "Violent right wing groups have no business here."