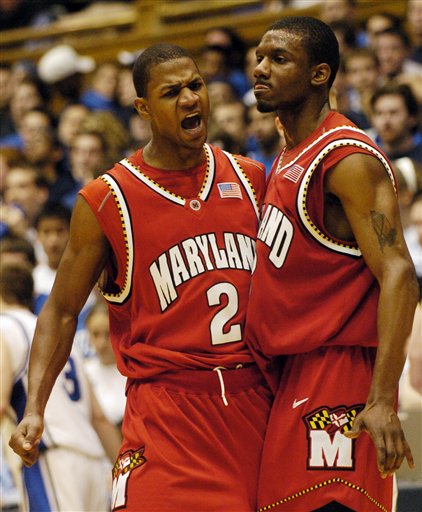 Mike Jones scored 25 points and D.J. Strawberry had a pair of baskets during a decisive second-half spurt Wednesday night to lead the 24th-ranked Terrapins past No. 14 Duke 85-77, giving the Terrapins their sixth straight victory.

Strawberry finished with 17 points for the Terps (23-7, 9-6 Atlantic Coast Conference), whose win streak _ all in conference games _ has firmed up what looked to be a shaky NCAA tournament resume only a few weeks ago. And the two most recent wins _ including an 89-87 weekend victory against North Carolina _ have the Terrapins dreaming big.

"Definitely it feels like a different team," Strawberry said. "Our confidence is sky high. We feel like we can go on the court with anybody and we're going to come out with the win. If we can play with a lot of energy and intensity, we're going to be fine coming down the rest of the season."

Maryland led by 12 points midway through the second half. Then, after Duke made a run to tie it, the Terrapins took control in the final five minutes for their second season sweep of the Blue Devils (22-8, 8-7) in three years.

The Terrapins _ who looked lost at 3-6 in the ACC just a few weeks ago _ shot 52 percent for the game, hit 7 of 13 3-pointers and blocked eight shots while committing just 13 turnovers. And when it was over, Strawberry pumped his first and confidently walked back to the bench while Ibekwe held the front of his red Maryland jersey up to a TV camera.

The Blue Devils had won four straight since losing at Maryland 72-60, a defeat that dropped the Blue Devils out of The Associated Press Top 25 for the first time in 11 years. But they couldn't avenge that loss, shooting 41 percent and coming up empty on several key possessions down the stretch.

It was Duke's fourth loss this season at Cameron, the most since losing four here in 1996. The loss also ensures the Blue Devils will not reach at least 10 regular-season ACC wins for the first time since that season.

"We didn't do a good job of protecting our home turf," said Greg Paulus, who led Duke with 20 points.

With the score tied at 64, Vasquez knocked down a hanging layup over the 6-foot-10 Josh McRoberts to put the Terrapins ahead for good with 5:11 left.

Then, after DeMarcus Nelson was whistled for an offensive foul, Strawberry went to work. He first knocked down a 3 from the left wing off a kickout from Ibekwe, then followed with a layup over McRoberts for a 71-64 lead with 3:50 left.

Duke certainly didn't help itself when the game hung in the balance. After a jumper from Paulus cut the deficit to 71-66 with 3:35 left, the Blue Devils didn't manage another field goal until Paulus' layup made it 79-70 with 49.7 seconds left. In addition, Paulus and Gerald Henderson each missed the front end of 1-and-1s during that stretch.

Maryland pushed the lead to as many as 11 points in the final seconds, punctuating the victory with a breakaway dunk from Ibekwe with 9.4 seconds left.

"Maryland is playing lights-out basketball," Duke coach Mike Krzyzewski said. "They played as well against us tonight as anybody has played against us all year. I think they could go against anybody."

Maryland led 44-38 at the break after Vasquez hit consecutive 3-pointers in the final 90 seconds of the half. The Terps looked to be in complete contrl after Strawberry scored twice in transition and Ibekwe added a free throw for a 56-44 lead with 13:11 left.

But the Blue Devils gradually clawed their way back, tying it at 64 when Jon Scheyer pulled up in transition and knocked down a 3 with 5:35 left that sent the home crowd into a frenzy.

"I thought Duke was going to make a run. It was just a matter of time," Maryland coach Gary Williams said. "We were good enough to win it down the stretch and that's why I'm proud of our guys."