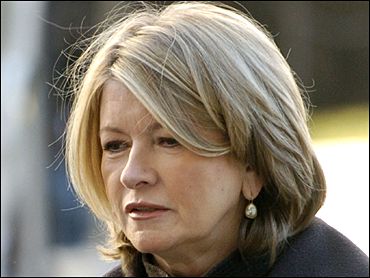 Martha Stewart's defense rested Wednesday after calling just one witness — a lawyer who was with her the first time she spoke to investigators about her sale of ImClone Systems stock.

The witness, Steven Pearl, was on the stand for less than 45 minutes.

U.S. District Judge Miriam Goldman Cedarbaum was still deciding the schedule for closing arguments, but has said the jury could receive its instructions and start deliberating as soon as Monday.
Pearl testified about notes he took on Feb. 4, 2002, when Stewart spoke to authorities about why she had sold ImClone stock in late 2001.

Lying about the existence of the message is one element of the government's allegation that Stewart made false statements to investigators.

Stewart and Bacanovic are accused of lying about why Stewart sold ImClone Systems stock on Dec. 27, 2001.

Stewart and Bacanovic say they had prearranged to sell her shares when the price fell to $60. The government claims Stewart was tipped that ImClone founder Sam Waksal was frantically trying to sell his shares that day.

Legal experts said putting Stewart on the stand would have raised a host of concerns for her defense team, including having her explain inconsistencies in her statements and exposing her to risky cross-examination by the government.

Other testimony at the trial had shown Stewart's quick temper, and she could have damaged her case by appearing hostile or combative under intense questioning by prosecutors.

Lawyers for Bacanovic had decided he would not take the stand because "the government hasn't made its case," spokesman Lou Colasuonno said. "It's a circumstantial case, with a lot of inference."

The star witness for the government was Douglas Faneuil, the young Merrill Lynch & Co. assistant who claims he passed the tip about the Waksal selling from Bacanovic to Stewart.

The day after Stewart sold, ImClone announced the government had declined to review its application for an experimental cancer drug. The stock sharply declined in the next trading day. The FDA recently approved the same drug.

Prosecutors on Tuesday aggressively attacked the credibility of Heidi DeLuca, a Stewart business manager who has helped the defense by saying Bacanovic mentioned a desire to unload Stewart's ImClone shares at $60 or $61.

Questioning DeLuca, prosecutor Michael Schachter tried to suggest that her conversation with Bacanovic had actually taken place in October and that the $60 or $61 instead referred to shares Stewart held in a pension account.

Schachter showed her a document dated Oct. 24, 2001, on which she had written an ImClone stock quote — $61.52 — while she was on the phone with Bacanovic.

DeLuca insisted that her memory was clear and that there had been more than one conversation.

On Monday, DeLuca testified: "He told me he felt ImClone was a dog. He felt he could set a floor price of $60 or $61 just in case the stock continued to fall, as a safeguard."

She said Tuesday that she had reminded Stewart of Bacanovic's plans on Jan. 29, 2002 — just six days before she gave her first interview to investigators in the ImClone probe.

Neither Stewart nor Bacanovic are charged with insider trading, or any offense relating to the stock sale itself. Instead, their statements about and actions after the trade are at issue.

Both face charges of conspiracy, obstruction of justice and making false statements to federal agents. Stewart is also charged with securities fraud for telling investors in her own firm, Martha Stewart Living Omnimedia, that she was innocent. Bacanovic is charged with perjuring himself before the Securities and Exchange Commission.

Sentences go up to five years in prison and a $250,000 fine for each of the five counts Bacanovic faces and four of the counts Stewart faces. The securities fraud charge against Stewart carries a possible 10-year sentence and million-dollar fine.