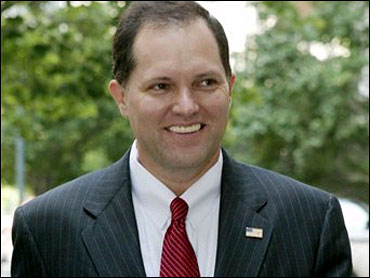 An ink expert was acquitted Tuesday of repeatedly lying on the stand at Martha Stewart's trial — a case the homemaking expert has seized on in her bid to have her conviction thrown out.

A federal jury deliberated about seven hours over two days before acquitting Secret Service scientist Larry Stewart — no relation to the millionaire homemaker — of two counts of perjury. Stewart had faced 10 years in prison if convicted.

"Mr. Stewart, good luck to you," U.S. District Judge Denny Chin said. The scientist appeared to lose color in his face as the verdict was read, and hugged his lawyers when it was complete.

With tears in his eyes, Stewart, 48, told reporters outside court that the ordeal had been "long, expensive and painful" and said it was difficult being on the other side of "a system I've worked for diligently for 25 years."

Federal prosecutors accused Stewart of exaggerating the role he played in ink analysis testing of a stock worksheet that was used as a piece of evidence against Martha Stewart and her stockbroker, Peter Bacanovic.

The pair were convicted in March of lying to investigators about why she sold stock in 2001.

Regardless of the verdict, the mere allegation that a prosecution expert witness was accused of lying on the stand is expected to figure prominently in appeals by both Martha Stewart and Bacanovic.

Both were allowed to remain free while they appealed. Stewart decided instead to begin serving her five-month term, and must report by Friday to the minimum-security women's prison in rural Alderson, W.Va.

Federal prosecutors said all along they did not believe the perjury charges against Larry Stewart put the Martha Stewart verdict on shaky ground.

"I think we're on solid footing on that point," U.S. Attorney David Kelley said Tuesday after the verdict.

Brooke Morganstein, a spokeswoman for Martha Stewart, declined comment on the verdict.

In the trial, the government contended Susan Fortunato, who worked for Larry Stewart at the Secret Service, had actually conducted the tests in the summer of 2002 and January 2004.

Fortunato also testified that Stewart once confronted her after an office meeting and kissed her. She complained to her supervisors but later withdrew the claim.

Jurors who spoke to reporters after delivering the verdict said they doubted Fortunato's credibility as a witness.

The trial offered a curious mix of scientific testimony about arcane ink testing methods and a detailed description of what the defense called a three-year feud between Fortunato and Stewart.

The defense noted that the pair, as well at least one other Secret Service employee, regularly went to lunches where the conversation veered into sexually charged material.

Reflecting on the sordid testimony about Secret Service office politics, juror Faustino Galan said: "I hope that the division that protects the president runs much better than the document section."

Stewart has been on suspension from the Secret Service since he was indicted this year. Asked whether he wanted his job back, he said: "Not that job. I don't want it."