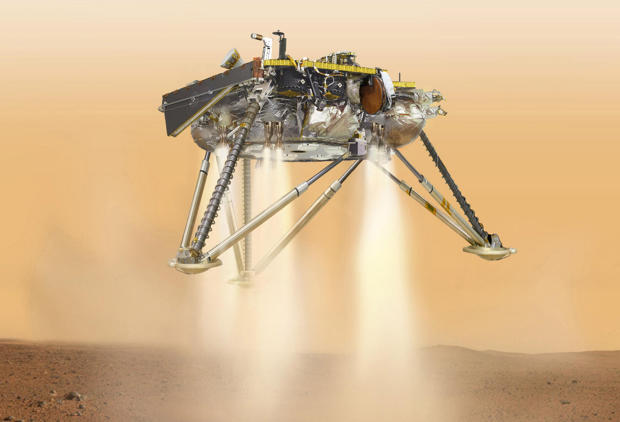 The NASA Mars InSight lander is scheduled to touch down on Mars today around 3 p.m. ET.  The robotic lander launched over six months ago from Vandenberg Air Force base in California.

InSight is expected to enter the Mars atmosphere and begin its decent to the Martian surface at approximately 2:47 p.m. ET.  Four minutes later, it will deploy a parachute to slow itself.  Once slowed, it will jettison its heat shield and then its landing legs will unfold and lock into place.

Communication with InSight is not immediate. It takes over eight minutes for radio signals to be received by scientists monitoring at the Jet Propulsion Laboratory in California. Real-time data will be relayed back by two small spacecraft flying behind InSight.

According to NASA, the signals are relayed by several spacecraft, jointly called Mars Cube One or MarCO. Because of the way signals are relayed in space, the InSight team may know fairly soon or may have to wait up to several hours to be sure if the probe touched down successfully.

If it lands successfully, InSight will be the eighth probe NASA has landed on Mars. InSight — which stands for Interior Exploration using Seismic Investigations, Geodesy and Heat Transport — will be the first mission dedicated solely to learning more about the planet's interior. It will attempt to glean clues about how rocky terrestrial planets like Earth formed during the birth of the solar system 4.5 billion years ago.

"The goal of InSight is nothing less than to better understand the birth of the Earth, the birth of the planet we live on, and we're going to do that by going to Mars," said Bruce Banerdt, principal investigator the InSight mission. "How we get from a ball of featureless rock into a planet that may or may not support life is a key question," he said.

Public viewing parties around the world

According to NASA, about 80 live viewing events have been scheduled worldwide for the public to watch the InSight landing. These locations include:

Locations noted with an asterisk (*) will have NASA representatives present.

How to watch the NASA InSight landing on Mars