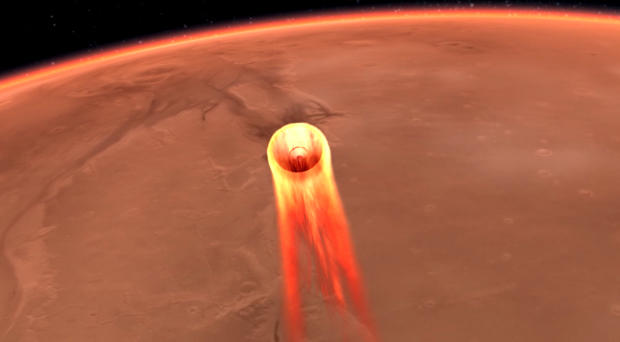 After a six-month voyage from Earth, NASA's InSight Mars lander reached the thin Martian atmosphere Monday afternoon to begin a nail-biting six-and-a-half-minute descent to the surface. After streaking through space at some 12,300 mph, it appeared to make a successful landing, kicking off a billion-dollar mission to probe the red planet's hidden interior.

"The goal of InSight is nothing less than to better understand the birth of the Earth, the birth of the planet we live on, and we're going to do that by going to Mars," said Principle Investigator Bruce Banerdt.

On Earth, plate tectonics and the constantly churning mantle have altered the planet's deep interior, obscuring its history and evolution. But Mars is a smaller planet and much less active than Earth, retaining the "fingerprints" of those earlier processes.

"By mapping out these boundaries, these various different sections of the inside of the planet, we can then understand better how the planet formed and how our planet got to be the way it is where we can actually live and play and have a good time," Banerdt said. "... So, we're going to go to Mars."

A final correction maneuver was planned Sunday afternoon to slightly tweak InSight's trajectory and ensure an on-target landing on a broad plain known as Elysium Planitia.

But as with all Mars landings, InSight's fully automated descent 90 million miles away was to take place far beyond any direct control -- or help -- from engineers on Earth. In fact, it will take radio signals 8.1 minutes to make their way to the Jet Propulsion Laboratory in Pasadena, California, where anxious scientists and engineers waited to find out whether the spacecraft made it successfully to the surface.

Nestled inside a flying saucer-shaped "aeroshell" and protected by a state-of-the-art heat shield, InSight was to begin its plunge at around 2:47 p.m. EST Monday, enduring braking forces up to 7.4 times the strength of Earth's gravity as it rapidly slows down and heats up to around 2,700 degrees Fahrenheit.

Four minutes later, at an altitude of 7.5 miles and now moving at a still supersonic 928 mph, a 39-foot-wide parachute will unfurl, inflating with a force of 15,000 pounds per square foot to slow the craft to a much more manageable 295 mph or so.

The no-longer-needed heat shield then will be jettisoned, exposing the bottom of the lander to the environment, and 10 seconds after that, its three landing legs will unfold and lock in place.

A few seconds later, about one minute before touchdown, InSight's downward-looking radar will be activated, measuring the spacecraft's altitude and rate of descent and feeding those data to the lander's flight computer.

Finally, less than a mile above the surface and descending at about 134 mph, InSight will be released from the aeroshell and parachute to fall freely on its own.

One second later, 12 small rocket motors will fire up, each one generating about 68 pounds of thrust as they pulse on and off 10 times per second, first moving the spacecraft to one side to avoid the falling parachute and aeroshell.

Nulling out its horizontal velocity and slowing to about 5 mph, InSight is expected to touch down on Elysium Planitia around 2:54 p.m., roughly 2 p.m. local time on Mars.

Fifteen minutes later, after waiting for the dust kicked up by the thrusters to settle back to the ground, InSight's two circular solar arrays will unfold to begin recharging the spacecraft's batteries. The arrays would generate about 1,300 watts of power on Earth, but on Mars, with its relatively dusty atmosphere, they'll manage just 300 to 600 watts or so.

The entry, descent and landing sequence was timed to coincide with the passage overhead of NASA's Mars Reconnaissance Orbiter, which is programmed to record UHF telemetry radioed up from InSight during its plunge to the surface. That data will be stored onboard the orbiter and relayed back to Earth about three hours after touchdown.

Realtime data will be beamed back from two experimental spacecraft known as Mars Cube One — MarCO — A and B that were launched with InSight back in May. They are the first so-called "CubeSats" to make an interplanetary voyage and they are the primary way flight controllers will be able to follow InSight's descent.

Unlike the much more sophisticated Mars Reconnaissance Orbiter, the MarCO spacecraft, which cost about $18.5 million to build, feature radio gear that can take in UHF signals from InSight and immediately relay them back to Earth at X-band frequencies.

"If it works, the two MarCO spacecraft will relay the data for InSight entry, descent and landing almost as it's happening, which will be very cool for both the MarCO team and the InSight team to figure out what's going on with the lander as soon as possible," said Anne Marinan, a manager of the Mars Cube One project at the Jet Propulsion Laboratory.

Regardless, InSight – the convoluted acronym stands for Interior Exploration using Seismic Investigations, Geodesy and Heat Transport – will send a computer-generated "tone" directly back to Earth seven minutes after touchdown to indicate its general health.

But detailed telemetry will not arrive until the Mars Reconnaissance Orbiter relays its stored data three hours after touchdown. Confirmation the solar arrays deployed normally will be relayed back by NASA's Mars Odyssey orbiter about five-and-a-half hours after landing.

"I am completely excited and completely nervous all at the same time because everything that we've done to date makes us feel comfortable that we're going to land on Mars," Hoffman said. "But everything has to go perfectly. Mars could always throw us a curve ball."

But if it works, InSight will pay off with the first detailed look at the interior of Mars, providing long-sought answers to questions about how planets were assembled when the solar system coalesced from a cloud of debris 4.5 billion years ago.

To work properly, both instruments must be lowered to Mars' surface with a robot arm and both require a relatively flat, rock-free area near the base of the lander. The Elysium Planitia landing site was chosen because it provides just that.

"As landing engineers, we really like this landing site," said Rob Grover, manager of InSight's entry, descent and landing on Elysium Planitia. "It's flat, it doesn't have many rocks, it's a very safe place to land."

Engineers will use cameras on the lander to precisely examine the area around the spacecraft to make sure the instruments are placed in the best possible location.

But it won't be quick.

"It's kind of a laid back, slow-motion mission compared to a lot of things that we've done before," Banerdt said. "It's going to take us probably two or three months, at least, to get our instruments down. We have to do a survey of the area in front of our spacecraft, make sure we don't put the instruments down on a rock or in a hole or something like that.

"And then we're very, very, very careful about how we put the instruments down. ... So it's going to take us probably a month or two to get the seismometer down and another month or so to get the heat flow probe down and penetrating down into the surface. We're probably looking at early next spring when we're really going to start bringing back that kind of science from Mars."

The seismometer is capable of detecting movements smaller than the width of a hydrogen atom, to record the faint vibrations of remote "marsquakes," meteor strikes and even the slight tidal tugs caused by the passage of Mars' two small moons, Phobos and Deimos, to map out the planet's inner structure.

The self-hammering temperature probe will pound its way to a depth of up to 15 feet to measure temperature changes and, by extrapolation, determine how much heat is flowing out of the core deep below.

In a third investigation, precise analysis of radio signals from the lander as Mars rotates will enable scientists to determine the exact orientation of its polar axis as it slowly wobbles, or precesses, due to the core "sloshing around" in the deep interior. From those data, they hope to determine the core's size, density and composition.

The goal is to help scientists understand how the solar system's terrestrial planets -- Mercury, Venus, Earth and Mars -- formed and how they evolved into the very different worlds we see today.

"Venus is hot enough to melt lead," Banerdt told reporters last week. "Mercury has a sun-baked surface. Mars is pretty cold today, but Earth is a nice place to take a vacation. We'd really like to know why one planet goes one way and another planet goes another way. Those answers are in the details of the structure that's formed very early in the planet's history."

On Earth, that structure has been "sort of scrambled up, both by plate tectonics and by mantle convection," he said. "And so, the evidence of the very earliest processes has been wiped away."

But on Mars, a planet half the size of Earth where plate tectonics and a churning mantle are not at work, evidence of the planet's early history is still preserved in the deep interior.

"These processes that do this all happen in the first few tens of millions of years," Banerdt said. "We'd like to be able to understand what happened, and the clues to that are in the structure of the planet that gets set up in these early years."