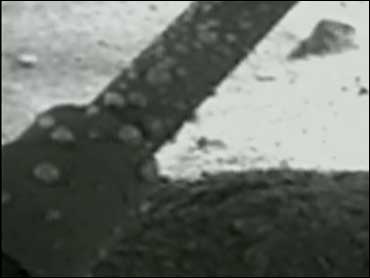 Did NASA's Phoenix Mars lander find evidence of liquid water before it froze to death?

Some scientists think so. In a provocative new paper, 22 members of the mission argue that droplets seen on Phoenix's leg were from liquid water that splashed during landing.

Scientists propose that the perchlorate salts near the landing site acted as an antifreeze by lowering the freezing point of ice, causing it to melt into a salty liquid. When Phoenix landed in the arctic plains, some of that liquid splashed onto its leg, they said.

Scientists point to images taken by the lander that show some of the droplets merged with each other and grew in size, behavior that is consistent with liquid water, they said.

But other team members say the images are too fuzzy to support the extraordinary claim.

"It's highly unlikely that that's the explanation," said Michael Hecht of NASA's Jet Propulsion Laboratory, which managed the $475 million mission. "It's just water vapor moving around. It's an ordinary, unexciting explanation."

Phoenix landed near the Martian north pole in May and spent five months digging into the soil and ice.

It confirmed the presence of ice at its landing site and became the first robotic probe to taste it by melting it. It also discovered an abundant amount of the chemical perchlorate, a highly oxidizing salt, in dirt samples.

The current Mars environment is too cold and its atmosphere too thin to support liquid water on the surface.

The new results will presented later this month at the Lunar and Planetary Science Conference meeting in Houston.