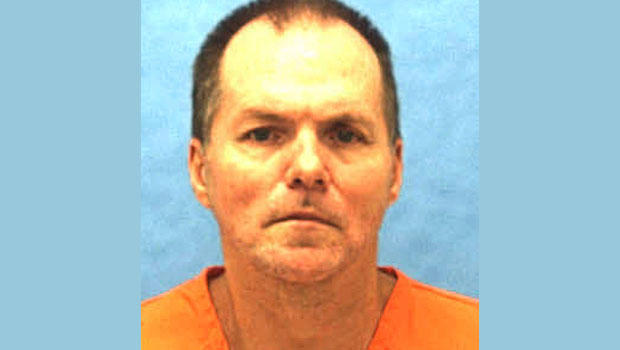 STARKE, Fla. -- For the first time in the state's history, Florida on Thursday executed a white man for killing a black man.

Mark Asay was pronounced dead at 6:22 p.m. Thursday at the state prison in Starke. His death followed a three-drug injection that began with the anesthetic, etomidate. Though approved by the Florida Supreme Court, etomidate has been criticized by some as being unproven in an execution.

Hours before his scheduled execution, the U.S. Supreme Court denied without comment Asay's final appeal. Asay, who was white, was convicted by a jury of two 1987 Jacksonville murders that prosecutors said were racially motivated.

Asay, now 53, fatally shot Robert Lee Booker, 34, a black man, after making multiple racist comments, prosecutors said. Asay's second victim was Robert McDowell, 26, who was mixed race, white and Hispanic. Prosecutors say Asay had hired McDowell, who was dressed as a woman, for sex and shot him six times after discovering his gender.

McDowell was described as black during Asay's trial, with prosecutors alleging that Asay shot both men because of their race, reports the Miami Herald. Asay reportedly had white supremacist tattoos on his body.

The Florida Supreme Court said earlier this week that McDowell's race was mistakenly identified during the trial, but said it didn't affect the trial's outcome, the paper reports.

At least 20 black men have been executed for killing white victims since the state reinstated the death penalty in 1976, according to data from the Death Penalty Information Center. A total of 92 Florida inmates have been executed in that time period.

Adora Obi Nweze, president of the Florida State Conference NAACP and an opponent of capital punishment, told the Miami Herald she believes the case shows how black inmates are punished disproportionately.

"It does make the case even stronger that there's this disparity gap that exists between black and white -- who gets the death penalty and who gets exonerated," she told the paper.

She also opposes the death penalty in Asay's case.

Asay's execution also marked the first use of the drug etomidate, the first of three drugs administered in Florida's new execution cocktail. It is replacing midazolam, which has been harder to acquire after many drug companies began refusing to provide it for executions. The etomidate is followed by rocuronium bromide, a paralytic, and finally, potassium acetate, which stops the heart. It is Florida's first time using potassium acetate too, which was used in a 2015 execution in Oklahoma by mistake, but has not been used elsewhere, a death penalty expert said.

State corrections officials have defended the choice, saying it has been reviewed. The corrections department refused to answer questions from The Associated Press about how it chose etomidate.

Doctors hired by Asay's attorneys raised questions about etomidate in court declarations, saying there are cases where it had caused pain along with involuntary writhing in patients.

But in its opinion allowing the drug to be used, the state's high court said earlier this month that four expert witnesses demonstrated that Asay "is at small risk of mild to moderate pain."

The execution was Florida's first in 19 months, since the U.S. Supreme Court halted the practice in the state after finding its method for sentencing people to death to be unconstitutional.

The court ruled that the old system was illegal because it gave judges, not juries, the power to decide.

Since then, Florida's Legislature passed a law requiring a unanimous jury for death penalty recommendations.

In Asay's case, jurors recommended death for both murder counts by a 9-3 vote. Even though the new law requires unanimity, Florida's high court ruled that the U.S. Supreme Court's ruling did not apply to older cases.

Asay's lawyer Martin McClain has said Asay's sentence should have also be negated based on the new, stricter standards, reports the Miami Herald. McClain has also reportedly cited deficient legal counsel and improperly handled court records as he fought for an execution stay, the paper reports.

Asay was the 24th inmate executed since Gov. Rick Scott has taken office, the most under any governor in Florida history.

Booker's son, Vittorio Robinson, who was 15 when his father was killed, told the Florida Times-Union newspaper in Jacksonville that his father's death helped him realize that racism was still alive.

"I just couldn't believe it," he said, describing when he learned of his father's death. "And then it dawned on me, there are actually still people out there that thought that way."