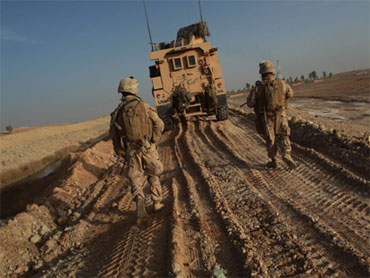 Marines moving by land from the north linked up Tuesday with U.S. units that have faced nearly constant Taliban attack in the four days since they were dropped by helicopter into this insurgent stronghold in southern Afghanistan.

Also Tuesday, U.S. artillery fired non-lethal smoke rounds to disperse Taliban fighters in Marjah - the first time cannons have been used in the fight to drive the militants from their logistical and opium poppy-smuggling base. Commanders refused a Marine request to fire deadly high-explosive rounds because the unit on the ground could not be sure civilians weren't at risk.

The linkup between the two Marine rifle companies and their Afghan army partners will enable the U.S. to expand its control in Marjah, situated in Helmand province 380 miles (610 kilometers) southwest of Kabul.

Lima Company of the 3rd Battalion, 6th Marines moved through fields of hidden bombs and bobby traps and braved heavy sniper fire to join up with the same battalion's Kilo Company, which was airdropped into the town in the first hours of the operation Saturday.

Lt. Gordon Emmanuel, a platoon commander in Kilo Company, said the Marines landed without encountering Taliban fire but came under sustained attack as they fanned out from the landing zone.

"When it is daytime, there is nonstop contact until the sun goes down ... every day," Emmanuel said.

A Taliban spokesman, however, claimed that insurgents retain control of the town and that coalition forces who "descended from helicopters in limited areas of Marjah" were now "under siege."

Spokesman Tariq Ghazniwal extended an invitation by e-mail to foreign journalists to visit Marjah, saying the trip would "show who have the upper hand in the area."

About 15,000 NATO and Afghan troops are taking part in the big offensive around Marjah, which has an estimated 80,000 inhabitants and was the largest southern town under Taliban control. NATO hopes to rush in aid and public services as soon as the town is secured to try to win the loyalty of the population.

NATO said a service member taking part in the Marjah operation was killed by a roadside bomb Tuesday - the third confirmed death among international forces since the attack on the town began. An American and a Briton were killed on Saturday.

NATO did not identify the latest victim by nationality. Afghan military spokesman Lt. Mohammad Esah said Tuesday one Afghan soldier died in the offensive. But he did not say when.

"We're not seeing coordinated attacks like we did originally. We're still getting small-arms fire, but it's sporadic, and hit-and-run tactics," said Marine spokesman Capt. Abraham Sipe. "As a whole, while there is still resistance, it is of a disorganized nature."

Nevertheless, Taliban have not given up. Insurgent snipers hiding in haystacks in poppy fields exchanged fire with Marines and Afghan troops as they swept south.

Insurgents tried but failed to shoot down an Osprey aircraft with rocket-propelled grenades as Cobra attack helicopters fired missiles at Taliban positions, including a machine gun bunker.

Marines and Afghan soldiers continued house-to-house searches, removing bombs and booby-traps as they moved through town. Inside some compounds Tuesday, squads found small doses of heroin, a Taliban photo album with fighters posing with AK-47s, and large propaganda wall paintings of insurgents shooting down helicopters.

Residents said they were scared to be seen with NATO forces. As Marines searched his compound, one man, Wali Mohammad, warned an AP reporter, "Don't take pictures or the Taliban will come back to kill me."

Mohammad said he strongly suspected insurgents would return to the area as soon as the Marines moved on. He said Taliban fighters had targeted U.S. and Afghan troops, firing from his neighbors' houses.

"When they come, we try to tell them not to use our house, but they have guns so they do what they want," the poppy farmer said.

Three more Afghan civilians were killed in the assault, NATO forces said, highlighting the toll on the population from an offensive aimed at making civilians safer.

The deaths - in three separate incidents - come after two U.S. missiles struck a house on the outskirts of Marjah on Sunday, killing 12 people, half of them children. Afghan officials said three Taliban fighters were in the house at the time.

"When President Karzai approved this operation he gave us very specific guidance, which was to protect the people of Afghanistan, and this operation was done with this in mind," said Gen. Stanley McChrystal.

NATO first said the missiles went 300 yards (meters) off target and hit the house. On Tuesday, however, British Maj. Gen. Nick Carter, commander of NATO forces in the south, told reporters in London via a video link that the rockets hit the intended target.

As the NATO offensive aims to break the Taliban influence in southern Afghanistan, the militant group received another blow with the news of its top military commander's arrest in Pakistan.

Mullah Abdul Ghani Baradar, the group's No. 2 leader behind Afghan Taliban founder Mullah Mohammad Omar and a close associate of Osama bin Laden, was captured in the port city of Karachi, U.S. and Pakistani officials said, speaking on condition of anonymity because of the sensitivity of the information. The arrest appeared to have occurred as many as 10 days ago, and it was unclear if it had any effect on the Marjah battle.

The offensive is the biggest joint operation since the 2001 U.S.-led invasion of Afghanistan and is a major test of a retooled NATO strategy to focus on protecting civilians, rather than killing insurgents.

But in two incidents confirmed Tuesday, Afghan men came toward NATO forces and ignored shouts and hand signals to stop, NATO said. Troops opened fire and killed them. In the third incident, two Afghan men were caught in the crossfire between insurgents and NATO forces. Both were wounded and one died despite being given medical care, NATO said.

NATO has confirmed 15 civilian deaths, but an Afghan human rights group said Tuesday that it counted 19 civilians killed since the operation began. Four were caught in the crossfire when they left their homes.

"Their neighbors tell us that the bodies are outside and they want someone to pick them up. They say they're scared if they go outside they will also be shot dead," said Ajmal Samadi, director of Afghanistan Rights Monitor. It was unclear whether NATO or insurgent forces were to blame for the deaths, he said.

Elsewhere in Helmand province, NATO and Afghan forces killed more than 10 militants while pursuing a Taliban commander in Washir district, west of the Marjah area.