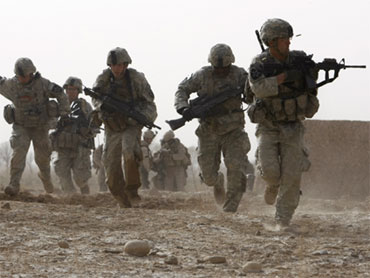 Two U.S. rockets slammed into a home outside the southern Taliban stronghold of Marjah, killing 12 civilians after Afghanistan's president appealed to NATO to take care in its campaign to seize the town.

Inside Marjah, Marines encountered "death at every corner" on Sunday, their second day of a massive offensive to capture this bleak mud-brick city filled with booby traps, hardcore Taliban fighters and civilians unsure where to cast their loyalty.

Marines confronted a fierce sandstorm as they ducked in and out of doorways and hid behind bullet-riddled walls to evade sniper fire. To the north, U.S. Army troops fought skirmishes with Taliban fighters, calling in a Cobra attack helicopter against the insurgents.

Insurgents littered the area with booby traps and explosives before the offensive, and the sound of controlled detonations - about three every hour - punctuated the day along with mortars and rocket fire.

"Our children are very scared by the explosions. When will it end?" asked Zaher, a 25-year-old poppy farmer who like many Afghans goes by one name.

"They got a suspected IED site over there and they got a souk, a market, over there," the general said. As he crossed the bridge his troops erected only yesterday, the Nicholson had one overriding concern - improvised explosive devices

"We expected a lot of IEDs but we're finding even more than what we expected, so I think the amount of IEDs is surpassing even our expectation," he said.

The Taliban has had plenty of time to place booby traps in the path of advancing coalition forces. So the Marines are advancing very carefully, Clark reports.

The owner of one property was ordered by the Taliban to clear out - an occurrence suspicious enough to cause the Marines to search every inch of the property for bombs.

Overhead, unmanned planes scanned the terrain for suspected traps. When one is located the drone fires a missile to safely set off the bomb.

The civilian deaths were a blow to NATO and Afghan efforts to win the support of residents in the Marjah area, a major goal of the biggest ground offensive of the eight-year war. Marjah, which had a population of 80,000 before the offensive, is a Taliban logistical centre and a base for their lucrative opium trade which finances the insurgency.

The rockets were fired by a High Mobility Artillery Rocket System, or HIMARS, at insurgents who attacked U.S. and Afghan forces, wounding one American and one Afghan, NATO said in a statement. Instead, the projectiles veered 300 yards (meters) off target and blasted a house in the Nad Ali district, which includes Marjah, NATO added.

The top NATO commander in Afghanistan, Gen. Stanley McChrystal, apologized to President Hamid Karzai for "this tragic loss of life" and suspended use of the sophisticated HIMARS system pending "a thorough review of this incident," NATO said.

Before the offensive began Saturday, Karzai pleaded for the Afghan and foreign commanders to be "seriously careful for the safety of civilians."

Karzai's spokesman Waheed Omar said the president "is very upset about what happened" and has been "very seriously conveying his message" of restraint "again and again."

Allied officials have reported two coalition deaths so far - one American and one Briton, who were both killed Saturday. Afghan officials said at least 27 insurgents have been killed in the offensive.

Nicholson is satisfied that his men are making good progress, though they are still coming under sporadic fire

"This is going to be a long tough slog over here," Nicholson told Clark. "We think it's going to be probably 30 days more work here in Marjah, but we're very optimistic. I think we're off to a good start today."

In unrelated incidents in southern Afghanistan, NATO said two service members died Sunday - one from small-arms fire and the other from a road side bomb explosion. The international force did not disclose their nationalities, but the British defence ministry reported that a British soldier died Sunday of wounds suffered in an explosion.

Marines and Afghan forces met only scattered resistance when they swooped down by helicopter on the impoverished farming community before dawn Saturday. A day later, however, Taliban attacks were escalating, with small bands of fighters firing rifles and rocket-propelled grenades at troops moving slowly through the bombs and booby traps hidden in homes, residential compounds and along the rutted streets.

"It seems these guys want to get a bit closer," Lt. Carl Quist said as bullets whizzed overhead.

Brig. Gen. Larry Nicholson, a top Marine commander in the south, predicted it could take 30 days to clear Marjah because of all the hidden explosives.

Marines said they would have preferred a straight-up fight to what they called the "death at every corner" crawl they faced as they made their way through the town.

"Basically, if you hear the boom, it's good. It means you're still alive after the thing goes off," said Lance Corp. Justin Hennes, 22, of Lakeland, Florida.

As Marines pushed deeper into town, gunfire forced them to take cover in buildings and compounds not yet cleared of booby traps. In one compound, a dog trained to detect explosives discovered a massive bomb hidden in a pile of trash.

Some troops complained that the strict rules issued by McChrystal to spare civilians were making their job more difficult and dangerous. Under the rules, troops cannot fire at people unless they commit a hostile act or show hostile intent.

U.S. soldiers operating near Marjah said the Taliban can fire on them, then set aside their weapon and walk freely out of a compound, possibly toward a weapons cache in another location.

A few crafty, determined insurgents can keep a larger force engaged for hours with some degree of impunity.

"The inability to stop people who don't have weapons is the main hindrance right now," said 1st Lt. Gavin McMahon of Brooklyn, N.Y. McMahon. "They know how to use our ROE against us," referring to the Rules of Engagement.

In areas where troops have wrested control from the Taliban, the second phase of the operation is under way - trying to convince civilians that their future lies with the government and not the insurgents.

Several shuras, or meetings with community leaders, have been held in Marjah and the surrounding Nad Ali district with more planned.

In one village, Qari Sahib, Afghan officials met with residents Sunday, promising to provide security, pave a road and build a school and a clinic. In exchange, they urged the villagers to renounce the Taliban and push militants to reintegrate into society. To show good faith, a resident who had been arrested for alleged militant activity was freed.

"This is all to the benefit for you people but we need your co-operation," Deputy Gov. Abdul Sattar Mirzekwal, told more than 100 villagers gathered outside a mosque. "Do not let the Taliban come into your area and disrupt security."

Most villagers at the shura expressed support for the government. Others expressed skepticism, laughing and paying little attention to the officials' promises.

Abdul Wali, a 23-year-old farmer, said he hoped people would give the government a chance.

"I'm afraid that if they do not join with the government, there will be fights, clashes and gunbattles in our village," he said. "I hope the government will fulfil all the promises it is making."