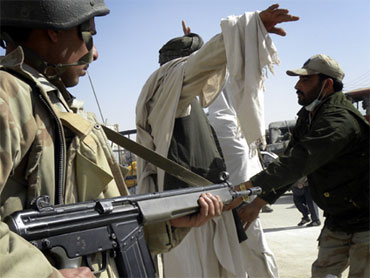 The Taliban's top military commander has been captured in Pakistan in a joint operation by Pakistani and U.S. intelligence forces, reports CBS News correspondent David Martin.

Mullah Abdul Ghani Baradar, described as the No. 2 behind Taliban founder and Osama bin Laden associate Mullah Muhammad Omar, has been in Pakistani custody for several days, the New York Times first reported on its Web site late Monday. It quoted U.S. government officials who spoke on condition of anonymity.

Baradar was captured in Karachi, Pakistan, in a raid by Pakistan's Directorate for Inter-Services Intelligence, with CIA operatives accompanying the Pakistanis, the Times reported. Pakistan has been leading the interrogation of Baradar, but Americans were also involved, it said.

At the White House, press secretary Robert Gibbs said he would not speak on the matter. Gibbs told reporters the fight against extremists involves sensitive intelligence matters and he believes it's best to collect that information without talking about it. Gibbs said reports that Baradar was arrested 10 days ago and was talking to his interrogators were "not helpful."

Martin reports that Baradar is in charge of all of the Taliban's military operations in southern Afghanistan, and for ensuring the groups finances.

"If he talks, he could give up virtually the entire Taliban network," reports Martin, with a reminder that the Obama administration has sworn off harsh interrogation techniques like water boarding.

"So he will be pressured to give information, but he will not be coerced," says Martin.

U.S. and Afghan leaders, "have been criticizing Pakistan for years for allowing the Taliban to move freely between Afghanistan and Pakistan, and now, by arresting Mullah Baradar, they have demonstrated in the strongest way a change in policy."

Sen. John Kerry, chairman of the Senate Foreign Relations Committee, agreed with that assessment when interviewed via satellite from Islamabad on Tuesday for "The Early Show".

"It's a big transition that is taking place," Kerry told "Early Show" co-anchor Maggie Rodriguez. "For some period of time, there were doubts in Pakistan about whether this was a fight that involved them."

Now, Kerry said, "the level of violence that has been brought by these insurgents, has convinced the government of Pakistan and the Pakistani people that their country is threatened and that this fight is their fight."

Baradar heads the Taliban's military council and was elevated in the body after the 2006 death of military chief Mullah Akhtar Mohammed Usmani. Baradar is known to coordinate the movement's military operations throughout the south and southwest of Afghanistan. His area of direct responsibility stretches over Kandahar, Helmand, Nimroz, Zabul and Uruzgan provinces.

It is hoped he may eventually provide information on the whereabouts of Omar, and possibly bin Laden.

A spokesman for the Taliban in Afghanistan told The Associated Press that Baradar was still free, though he did not provide any evidence.

"We totally deny this rumor. He has not been arrested," Zabiullah Mujahid told the AP by telephone. He said the report of the arrest was Western propaganda aimed at undercutting the Taliban fighting against an offensive in the southern Afghan town of Marjah, a Taliban haven in Helmand province.

"The Taliban are having success with our jihad. It is to try to demoralize the Taliban who are on jihad in Marjah and all of Afghanistan," he said.

A spokesman for the militant movement also denied Baradar's arrest in a phone call to CBS News' Sami Yousafzai, suggesting the person in custody may be someone else with the same family name.

However, multiple militant sources told Yousafzai that Baradar had been out of contact for about a week.

The Times said it learned of the operation against Baradar on Thursday but delayed reporting it at the request of White House officials who argued that publicizing it would end a valuable intelligence-gathering effort by making Baradar's associates aware of his capture. The newspaper said it decided to publish the news after White House officials acknowledged Baradar's capture was becoming widely known in the region.

The CIA declined comment late Monday on the Times report.

Word of Baradar's capture came as U.S. Marine and Afghan units pressed deeper into Marjah, facing sporadic rocket and mortar fire as they moved through suspected insurgent neighborhoods on the third day of a NATO offensive to reclaim the town.