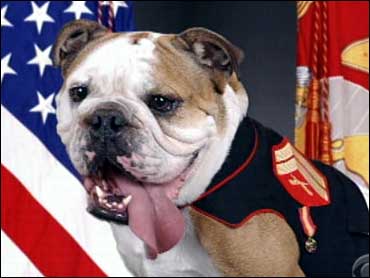 Nobody does pomp and circumstance like the Marines, CBS News national security correspondent David Martin reports.

Its silent drill team is precision personified. Imagine how much practice it takes to pull a ceremony off.

But here comes the real star of the show the Marines put on every Friday during the summer - Chesty, the Marine Corps' mascot. He's named not for his physique, but for the most decorated of all Marines, Chesty Puller.

Behind that 15 seconds of fame stands his handler, Corp. Moncelly Fuller.

"He actually has more medals than me," Fuller said.

"He's got three paw prints here. That means he got written up three times?" Martin asked.

He fell asleep on duty.

"He fell asleep -- not on duty, but at rehearsal," Dixon said.

"Exactly how do you counsel a dog?" Martin asked.

"Well, you bring him in, you sit him down face to face, Marine to Marine, commanding officer to Marine, and you tell him like it is," Dixon said.

How did he take to counseling?

"Not too good," Dixon said.

Would he call Chesty recalcitrant?

Truth be told, Chesty is not honed to the same razor's edge as the silent drill team. Even his owners, fellow Marines Michael and Kristen Mergen, will admit that.

"Basically his one and only job is to walk down center walk on parade and sit," Mergen said.

You'll notice that on one night, a parade in honor of Defense Secretary Gates, Chesty doesn't sit.

"My theory is that his uniform is getting a little tight on him so … " Kristen Mergen said.

Is he putting on the pounds?

"It may be that. I think it's his hips, too. Hence the need for a new mascot," she said.

After seven years - make that 49 in dog years - during which he rose through the ranks to sergeant, Chesty is being replaced. Being the Marine mascot is a young dog's game.

But if it strikes you as just a game, then you don't understand the Marines.

"Do you ever say to yourself, 'hey, wait a minute, this is just a dog'?" Martin asked.

"I do not, because I understand and I respect the role of mascot," Dixon said. "It's how we showcase and highlight what we do."

And yes, there will be a retirement ceremony after Chesty walks through the gates of the Marine Barracks for the last time tomorrow.