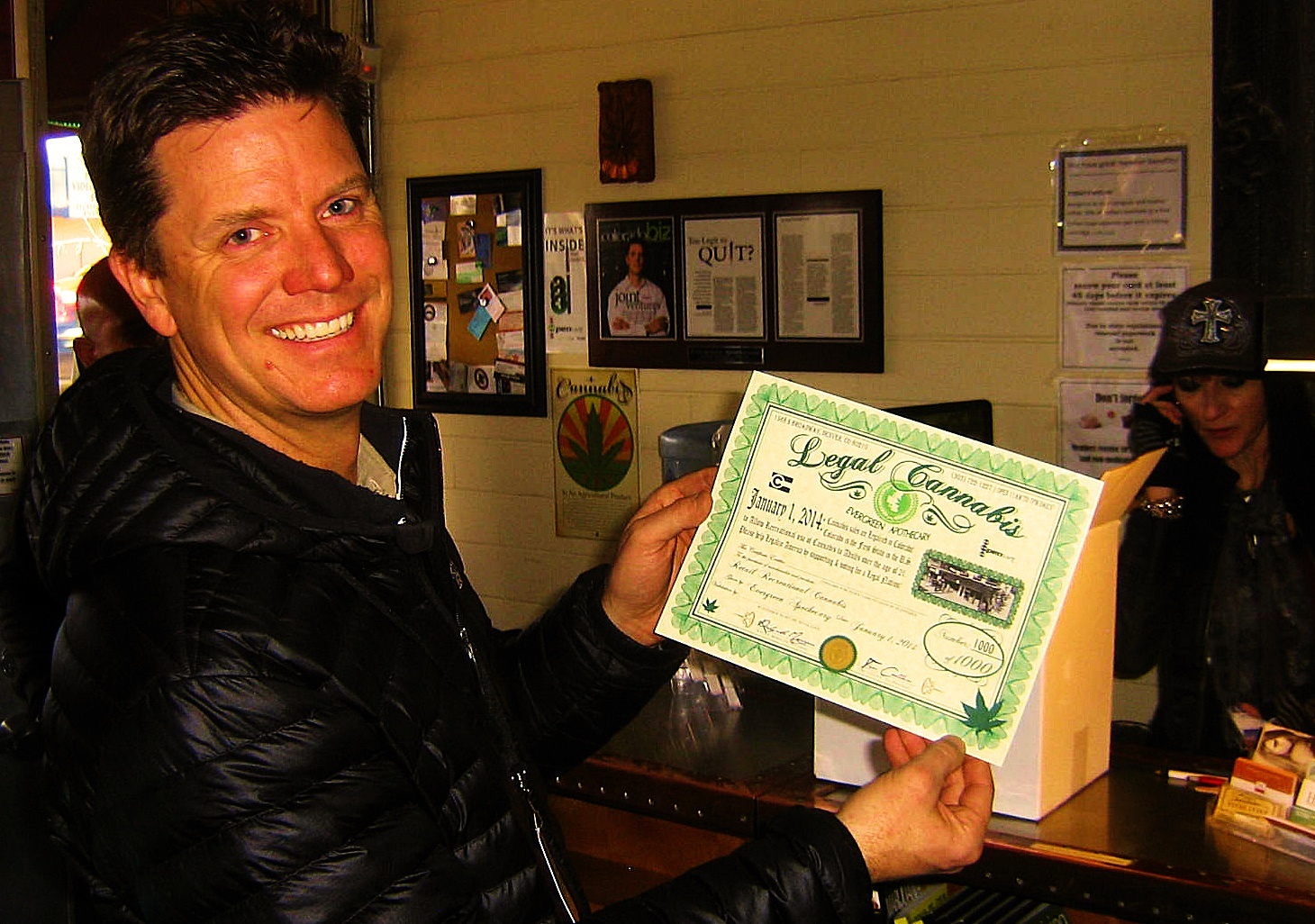 The day after New Year's, Ralph Morgan is watching crowds of people lining up outside the Evergreen Apothecary in Denver with what looks to be a mixture of pride, elation and apprehension.

Morgan, 40, is one of Evergreen's owners, and the excited horde of people at his shop have lined up to become some of the first adults in Colorado to legally purchase cannabis for recreational use under a new state law. And he admits he never expected the crush of people that have come to buy his product.

“In fact,” he said, “we printed 250 certificates so that people could use those as a memento to archive the event, and we were out of those by about 8:15 a.m.”

“I knew it was going to be a part of history, started doing some due diligence on it and learned that, wow, there is tremendous medical efficacy here,” he recalled.

The Morgans found commercial space in south Denver, along with a landlord who was open to the idea of housing a cannabis shop. “We admitted to him that we didn't have any idea of what we were doing, had never grown marijuana,” Morgan laughed.”We just thought it was a phenomenon, and it was a part of history.”

The first year was a struggle. Morgan says for a while there were more people coming into their store trying to sell them marijuana than actual customers. But his company then began targeting older cannabis consumers. During the first first year, the average age of the Apothecary's customer base was 64.

“We didn't satisfy the [typical marijuana user's] stereotype, that's for certain,” he said. “We really enjoyed speaking with people who were finding tremendous success with their ailments with cannabis.”

They soon started a second company, Organalabs, that extracts cannabis oil for tablets, use in portable vaporizers and other applications. And a year later the Morgans merged with another group, Colorado Harvest Colony.

Unlike other small businesses, the medical marijuana industry in Colorado – and now its recreational counterpart – is burdened with very specific regulations. State law requires companies to grow at least 70 percent of the product they sell. Recreational marijuana also comes with a stiff sales tax meant to fund state education projects.

Because marijuana remains a felony under federal law, most banks and financial institutions won't work with the cannabis industry, forcing dispensaries to deal largely in cash-only transactions.

“You're forced to grow organically,” Morgan said, referring to his business model and not his cannabis plants. “It's great to not have debt, which we don't. However, you're shackled to what you can afford. So you can steal equity from the home, you can ask friends and family. But the market's maturing. A lot of people now are interested in investing.”

Like other established companies in Colorado's cannabis industry, Morgan and his group ramped-up production after the 2012 elections, when the state's voters approved the sale of recreational marijuana to adults. But even that advance planning couldn't prepare him for the rabid consumer demand unleashed on Jan. 1 when the new law went into effect.

“At this pace, we're going to be out of product to sell people on the [recreational] side in a matter of weeks,” he said. If Evergreen runs out, a new crop is harvested weekly at the company's grow facilities and a new supply, while limited, comes on the market.

Once the hoopla and pent-up demand for marijuana dies down, Morgan predicts this budding new business is going to see “tremendous stability” – and open the door for the legalization of cannabis in yet more states.