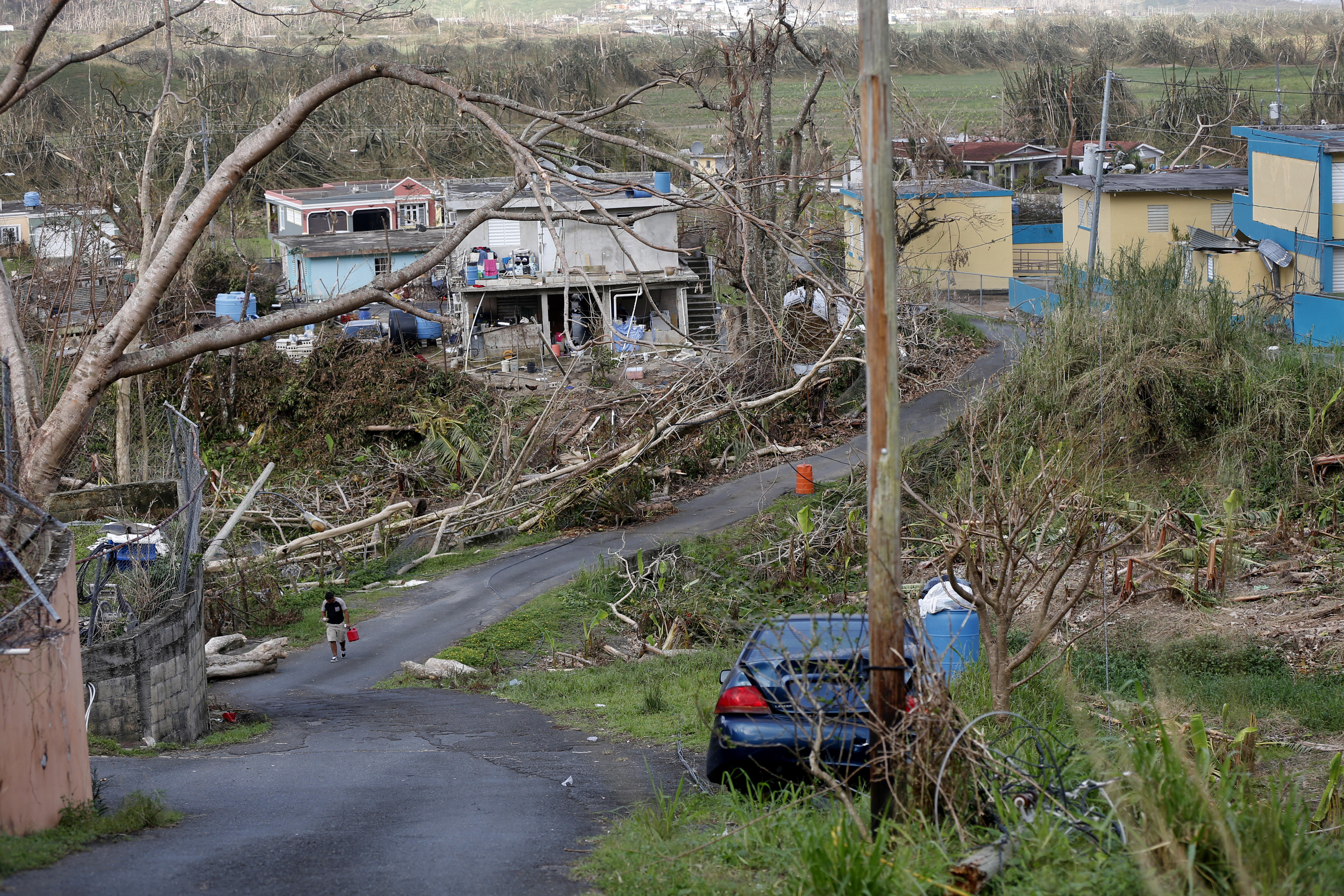 WASHINGTON -- The Trump administration is sending a flotilla of ships and thousands more military personnel to Puerto Rico to address the growing humanitarian crisis caused by Hurricane Maria.

The administrator of the Federal Emergency Management Agency, Brock Long, said Tuesday that badly damaged airports and seaports are making it difficult to get aid and personnel to the stricken island.

Long said 16 Navy and Coast Guard ships were in the waters around Puerto Rico, with 10 more ships on the way. They include the USNS Comfort, a Navy hospital ship. Planes and ships were also bringing in a military force numbering in the thousands to help distribute aid. Military aircraft were dropping food and water to areas of the island still isolated and unable to receive help by road, he said.

Six days after Maria struck the island, conditions in Puerto Rico remain dire, with 3.4 million people virtually without electrical power and short of food and water. Flights off the island are infrequent, communications are spotty and roads are clogged with debris. Officials said electrical power may not be fully restored for more than a month.

Only 21 of the 69 hospitals have power or fuel, CBS News correspondent David Begnaud reports from San Juan.

San Juan Mayor Carmen Yulín Cruz is frustrated with what she says is a slow response from FEMA.

"They're waiting for their marching orders now. You're in an emergency.  If you don't do --  hundreds of lives will be lost," she told Begnaud.

The shift, six days after the storm made landfall, came amid a growing chorus of criticism that the federal response so far had been insufficient and had fallen far short of the responses to hurricanes Harvey and Irma.

After not mentioning the hurricane-devastated island for days, President Trump pushed back aggressively and repeatedly Tuesday against criticism that he had failed to quickly grasp the magnitude of Maria's destruction or give the U.S. commonwealth the top-priority treatment he had bestowed on Texas, Louisiana and Florida after previous storms.

And he attended a hurricane briefing. He called a meeting of agency heads tasked with helping Puerto Rico recover, and sent top officials, including Long, to talk to reporters.

Throughout, the president stressed that Puerto Rico's governor had praised the federal response, characterizing Ricardo Rossello as "so thankful of the job we're doing."

Mr. Trump, who had proposed visiting Puerto Rico earlier this month, said next Tuesday was the earliest he could get there without disrupting recovery efforts.

His public focus in recent days on other matters, particularly his extended commentary on NFL players who kneel during the National Anthem, generated criticism that he was giving Puerto Rico short shrift after devoting considerable public attention to storm damage in Texas and Florida.

Rep. Nydia Velazquez, D-N.Y., said she had been concerned that Mr. Trump's continued tweets about NFL players showed he didn't grasp the severity of the crisis. She warned that if he didn't start taking it seriously, "this is going to be your Katrina," referring to criticism of President George W. Bush following the slow federal response to Hurricane Katrina in 2005.

And it wasn't just Democrats.

By Monday, Democrats, Republicans and Rossello were emphasizing that Puerto Ricans are Americans, too.

The Pentagon said the number of active-duty military personnel assisting in Puerto Rico would grow from about 2,500 to possibly double that number in the next several days.

An Army brigadier general will take over command of the military response, which will include additional medical facilities and satellite communications equipment, said John Cornelio, spokesman at U.S. Northern Command. The USNS Comfort is expected to leave Baltimore by Saturday and arrive in Puerto Rico three to five days later.

The military response also will include a civil affairs unit from Fort Bragg, North Carolina, that will be used to help communicate with the residents on the island, Cornelio said. The unit will use loudspeakers, trucks, leaflets and text messaging to get needed information to the public.

Additional National Guard forces are also being sent in to provide more security on the island. Those forces will be under the command of the governor, and could be used around fuel access points where there have been some security problems.

Long said the federal government has provided 4 million ready-to-eat meals and 6 million liters of water. That would account for less than a day's supply for each of the island's 3.4 million U.S. citizens.

"It's an island. We don't just drive trucks and resources onto an island," Long said, stressing that all supplies had to cross hundreds of miles of water to get to the U.S. territory. He said relief efforts were initially hampered by damage to air traffic control systems at the airport in San Juan, limiting the flow of government and commercial flights. Federal personnel were now working to repair two other airfields, he said, to increase the capacity to bring in supplies by air.

He also suggested Puerto Rico was less able to withstand and recover from the storm than the U.S. states on the mainland.

"The infrastructure is weak, and there were no building codes, so there is a lot of devastation," Long said. "Unfortunately, because of the severity of the hit, there is diminished capacity of local governments and state government to respond similar to what we saw with Texas and Florida."

Long also warned people not involved with the relief effort to stay away.

"If you're going to Puerto Rico right now, it should be for only a life-sustaining, life-support mission," he said. "Because everybody that's trying to get in that's not supporting that is getting in the way."