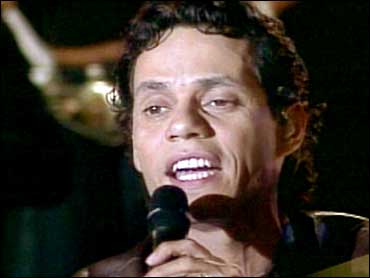 Marc Anthony made headlines recently with his surprise marriage to longtime friend Jennifer Lopez. The event took place just three days before the release of his first Latin pop CD, "Amar Sin Mentiras," which means, "To Love Without Lies."

In his new CD, he does a sensual duet with his bride called, "Escapémonos" which talks of getting away and just falling into the arms of your loved one.

"The song is about two people who want the world to leave them alone," Marc Anthony says and points out his CD reflects his philosophy of how he lives his life. "I think everybody longs and yearns to find that place where they can just love, you know, all the way around without lies. Just to love with clarity and pureness."

"Amar Sin Mentiras," opens with the first single, "Ahora Quién" which is a reflective and striking power ballad. Other songs include: "Se Esfuma Tu Amor" and "Valió La Pena."

For the Summer Concert series, he sang "Ahora Quién;" his hit "My Baby You;" and "Nadie Como Ella" from his album, "From The Beginning," or "Desde Un Principio."

Next for the Latin star are the salsa versions of the song, "Amar Sin Mentiras." He says, "I thought it was necessary. I'm almost done with it. We just finished mixing it. The reason the tour was postponed was because the salsa versions were pushed back. So I wouldn't be here today if I had been on tour. I had to promote this album. I had to come out. I had a responsibility to the record company. That's why I'm here. That's what I'm doing. But the tour's going to be bigger, better than ever, in November."

And there are other projects in the works. After getting rave reviews for his performance in the film "Man On Fire," he is expected to act in a movie J.Lo is producing. "It's still being developed," he says, "It's something that I jumped on board to do. But yeah, there are many, many projects in the works right now."

Named by his musician-father after famous Mexican singer, Marco Antonio Muniz, he changed his name professionally to avoid being confused with the legendary singer. The Muniz family kitchen table in Spanish Harlem was his first "stage," his "repertoire "was a single song about a bird native to Puerto Rico. Even as a small child, he knew how to wow an audience, in this case, his extended family and their musician friends.

"He had just the one song," his father recalls, "but, boy, he could belt it out."

In 1999, he debuted with his triple platinum "Marc Anthony", while in 2001 the double platinum "Mended" became his second back-to-back multi-million album seller. This was followed up with the triple platinum "Libre," his first tropical release since his Grammy award winning "Contra La Corriente" in 1997.