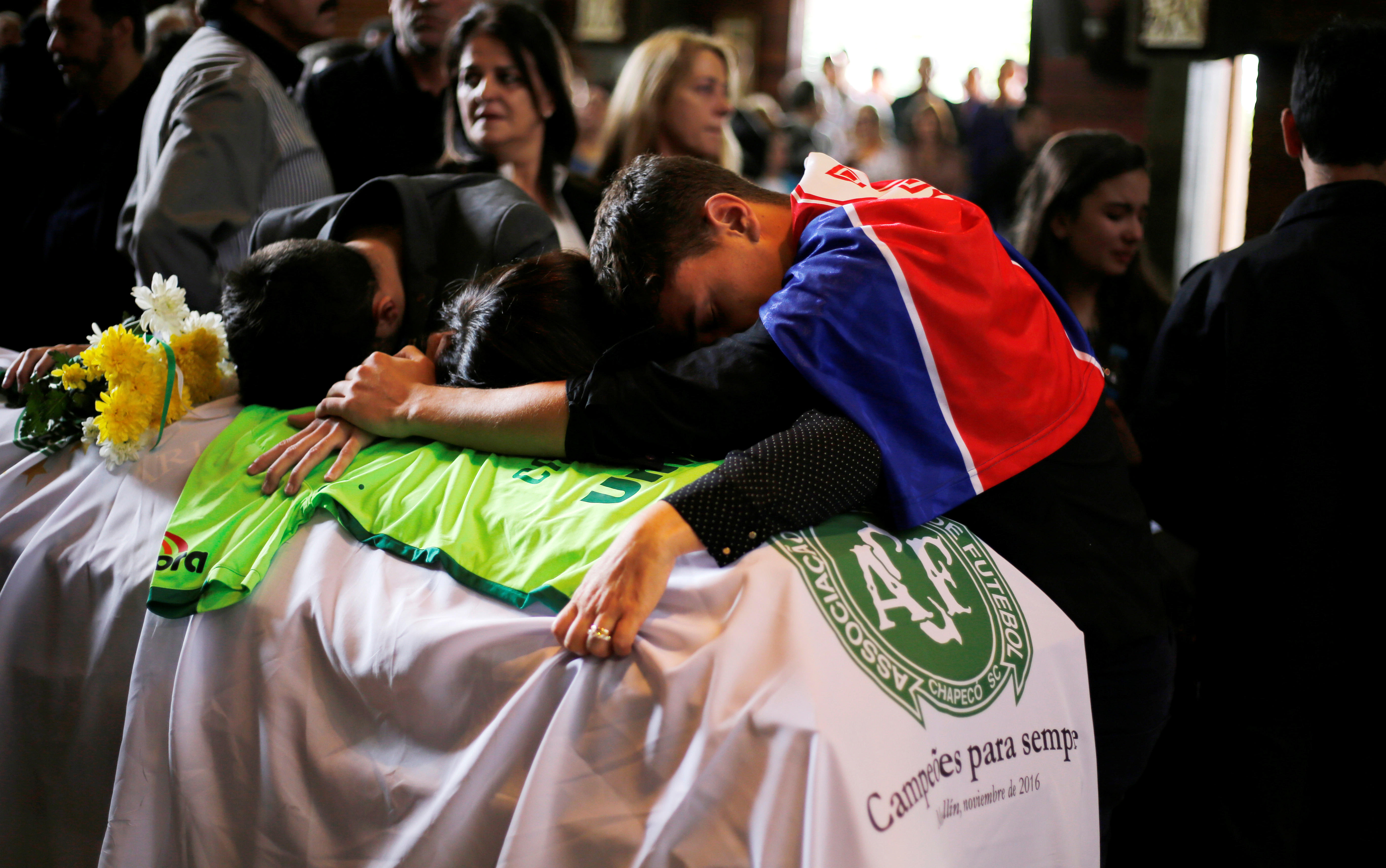 CHAPECO, Brazil -- The final round of matches in Brazil’s top soccer league was postponed after a deadly plane crash last week killed most members of the Chapecoense soccer team. Players on many teams have said they don’t want to play, and the Brazilian Football Confederation has not clarified if matches will take place next weekend.

Chapecoense president’s was buried on Sunday as fans paid their final tributes to victims of the crash, trying to put behind them the worst moment in the club’s history, and one of the worst in the history of the sport. Pallaoro was on the plane when it went down as the club was traveling to Colombia to play the first of two games to determine the Copa Sudamericana champion -- the No. 2 club tournament in Latin America.

The crash killed 71 of 77 people on board the chartered plane, including 19 players, as the team was enjoying a Cinderella season. The aircraft departed from Santa Cruz, Bolivia.

The pilot told air traffic controllers he had run out of fuel moments before crashing into the Andes in Colombia. A recording from the air traffic tower leaked to W Radio shows the pilot of the British-built jet repeatedly requesting permission to land due to a “total electric failure” and lack of fuel.

On Friday, Colombia began repatriating the victims. Bolivia’s president called for “drastic measures” against aviation officials who signed off on a flight plan that experts and even one of the charter airline’s executives said should never have been attempted due to concerns over the possible fuel shortage.

In Brazil, the deceased players were honored Saturday at Chapeco’s stadium, with burials taking place across the country. None of the players were from the small southern Brazilian city.

Pallaoro was praised for making the small club competitive, and keeping it out of debt.

“Until now our priority was the families,” Chapecoense fan Agenor Martins said.

“Now we have to open a new chapter for the club and for the city, we have to move on. The president’s example is that we can be great even in a small city if we do everything in the right, most transparent way. And we will do it again.”

The South American Football Confederation will name the club as 2016 Copa Sudamericana champions, interim Chapecoense president Ivan Tozzo said on Saturday, according to ESPN. The confederation, known as CONMENBOL, will give the title, as well as prize money, to the club.

“Right now we are beginning to rebuild the team. People want football, people love football in Chapeco,” ESPN quoted Tozzo as saying, citing local media outlet Globo. “Therefore, we must continue this. Let’s talk and do well, let the dust settle and rebuild the team for next year.”

Atletico Nacional, which would have been Chapecoense’s competitor in the final, said in a statement that it invited CONMEBOL to give the title to Chapecoense “as an honor for their great loss and in posthumous homage to the victims of the tragic accident that has our sport in mourning.”

Chapeco Mayor Luciano Buligon said the city is looking forward and hopes to return to some ordinary routines on Monday.

“Schools will be open again, and we will start adapting after this tragedy that will be with us forever,” Buligon said. “Our community will hold tight and recover little by little. Until then all we can do is to be with the families that stay here and cry with them.”

The club is guaranteed a spot next season in Brazil’s top league, and is likely to be reassembled with mostly junior players, and players on loan from other clubs.

Retired Argentine star Juan Roman Riquelme and Brazil’s Ronaldinho have offered to come out of retirement to help the club.