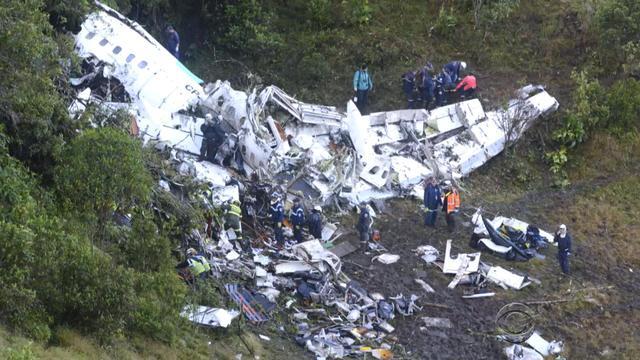 LA UNION, Colombia  --The pilot of a chartered plane with 77 people aboard told air traffic controllers he had run out of fuel moments before crashing into the Andes.

A recording from the air traffic tower leaked to W Radio shows the pilot of the British-built jet repeatedly requesting permission to land due to a “total electric failure” and lack of fuel.

A female controller can be heard giving instructions as the aircraft loses speed and altitude about 8 miles from the Medellin airport. Just before going silent the pilot says he’s flying at an altitude at 9,000 feet.

W Radio didn’t say how it obtained the recordings. But they would seem to confirm the account of a pilot on a nearby commercial flight.

Authorities also said they were not ruling out the possibility the aircraft ran out of fuel minutes before it was to land at Jose Maria Cordova airport outside Medellin, a report given to rescuers by a surviving flight attendant. Officials said they hoped to interview her Wednesday.

Monday’s crash killed all but six of the people aboard, including most members of the Chapecoense soccer team from Brazil, which was enjoying a Cinderellas seaon and was enroute to play in a championship.

In addition to searching for causes of the crash, Colombian Authorities were also working to finish identifying the bodies of the victims before repatriating them to Brazil. Forensic experts have said that that process is going quickly because the crash did not include a fire.

The country’s aviation agency said Tuesday that the British Aerospace 146’s cockpit voice recorder and flight data recorder had been found among the wreckage strewn over a mountainside and were already being studied by experts.

Initially, Colombian officials said the short-haul jet suffered an electrical failure, but there was also heavy rain when the crew declared an emergency and the plane disappeared from radar just before 10 p.m. Monday.

Sadness and pain resonated across the region over the loss of most of the Chapecoense soccer team from southern Brazil, which had fought its way into the championship of one of South America’s most prestigious tournaments just two years after working its way into Brazil’s top league for the first time in decades.

Pope Francis said a prayer for the victims, and thousands Tuesday attended vigils in Bogota, Colombia, and Chapeco, Brazil, home of the fallen team.

The aircraft, which departed from Santa Cruz, Bolivia, was carrying the team to Wednesday’s first game in the two-game Copa Sudamericana final against Atletico Nacional of Medellin. Twenty-one Brazilian journalists were traveling with the team.

South America’s soccer federation canceled all scheduled matches in a show of solidarity, while the Real Madrid and Barcelona clubs in Spain interrupted their training sessions for a minute of silence. Brazil’s top teams offered to lend players to the small club for next season as it rebuilds, saying: “It is the minimum gesture of solidarity that is within our reach.”

In a moving gesture, Atletico Nacional asked that the championship title be given to Chapecoense, whose upstart run in the tournament electrified soccer-crazed Brazil.

Three players were among the survivors. Alan Ruschel was reported in the most serious condition, facing surgery for a spinal fracture. Teammates Helio Zampier and Jakson Follmann also suffered multiple trauma injuries, and doctors had to amputate Follmann’s right leg.

“The chances of surviving an airplane crash are practically zero. That my son is one of the survivors is a miracle of God,” Follman told The Associated Press.

The aircraft is owned by LaMia, a charter company that started in Venezuela but later relocated to Bolivia, where it was certified to operate last January. Despite apparently limited experience, the airline has a close relationship with several premier South American soccer squads.

Earlier this month, the plane involved in the crash transported Barcelona forward Lionel Messi and Argentina’s national team from Brazil following a World Cup qualifying match. The airliner also appeared to have transported the national squads of Brazil, Bolivia and Venezuela in the last three months, according to a log of recent activity provided by Flightradar24.com.

Before being taken offline, LaMia’s website said it operated three 146 Avro short-haul jets made by British Aerospace, with a maximum range of around 2,965 kilometers (1,600 nautical miles) - about the distance between Santa Cruz and Medellin.

Hans Weber, a longtime adviser to U.S. aviation authorities, said the aircraft’s range deserves careful investigation. He noted that air distance between cities is usually measured by the shortest route but planes rarely fly in a straight line, with pilots steering around turbulence or changing course for other reasons.

Given the model of the plane and the fact that it was flying close to capacity, “I would be concerned that the pilots may have been cutting it too close,” Weber said.

A spokesman for Bolivia’s civil aviation agency, Cesar Torrico, said the plane was inspected before departing for Colombia and no problems were reported.