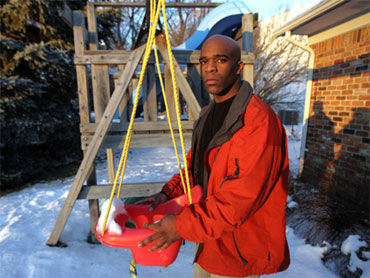 An Internet law designed to protect the stealing of trade secrets and identities is being used to levy a felony charge against a Michigan man after he logged onto his then-wife's Gmail account and found out she was cheating.

Leon Walker, 33, of Rochester Hills, Mich., is being charged with felony computer misuse, and faces up to five years in prison after logging into the email account of now ex-wife Clara Walker on a shared laptop using her password, the Detroit Free Press reports.

He is facing a Feb. 7 trial. Leon and Clara Walker's divorce was finalized earlier this month, the Free Press reports.

Clara, who was married twice previously, was having an affair with her second husband, as Walker found in her email, according to the Free Press. The second husband had been arrested earlier for beating her in front of her young son from her first husband.

Walker was worried about more domestic violence from husband No. 2, so he handed the e-mails over to the child's father, the Free Press reports. He promptly filed an emergency motion to obtain custody.

Leon Walker, a computer technician with Oakland County, was arrested in February 2009, after Clara Walker learned he had provided the emails to her first husband.

"I was doing what I had to do," Leon Walker told the Free Press in a recent interview. He has been out on bond since shortly after his arrest. "We're talking about putting a child in danger."

Oakland County Prosecutor Jessica Cooper defended her decision to charge Walker, calling him a skilled "hacker" who downloaded the material in "a contentious way."

Electronic Privacy expert Frederick Lane told the Free Press that the case hinges in a legal grey area, and the fact that the laptop was shared may help Walker's cause.

About 45 percent of divorce cases involve some snooping -- and gathering -- of email, Facebook and other online material, Lane said. But he added that those are generally used by the warring parties for civil reasons -- not for criminal prosecution, the Free Press reports.