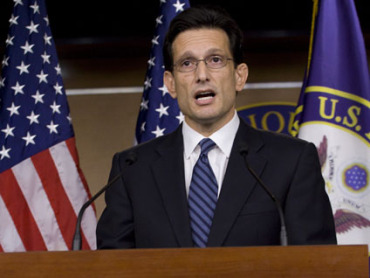 A Philadelphia man was charged today with threatening to kill House Republican Whip Eric Cantor and his family, the Washington Post reports. The threats came in the form of a YouTube video, which has been taken down.

Norman Leboon, 33, reportedly faces charges punishable by up to 15 years in prison, three years supervised release, a fine up to $500,000 and a $200 special assessment, according to the U.S. attorney's office.

"The Department of Justice takes threats against government officials seriously, especially threats to kill or injure others," U.S. Attorney Michael L. Levy said in statement to the Post. "Whether the reason for the threat is personal or political, threats are not protected by the First Amendment and are crimes."

Cantor's press secretary Brad Dayspring said in a statement that Cantor was notified over the weekend of the credible threat and of the arrest of a suspect. He said Cantor thanks the law enforcement involved but will have no further comment on the issue.

Last week, Cantor held a press conference to reveal that he had received death threats and that a bullet was shot through the window of his Richmond, Va. office. He made the point that Republicans as well as Democrats are the targets of such threats, in the wake of a number of threats made against Democrats because of their support for health care reform. Cantor said that Democrats were politicizing the serious threats by blaming Republicans for encouraging hostile behavior.

Local police later determined the bullet shot through Cantor's office was the result of random gunfire.