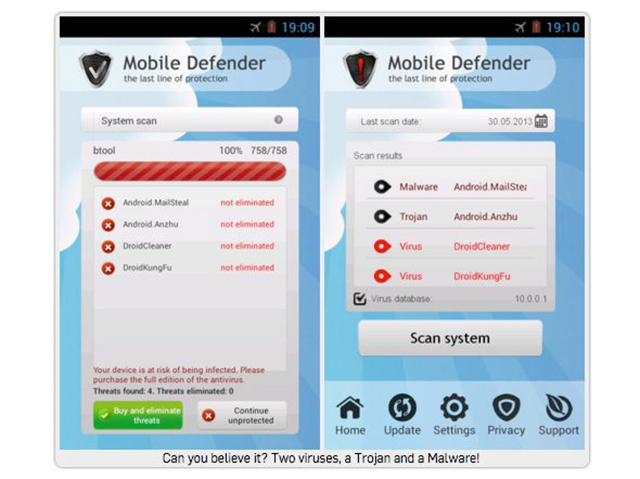 (MoneyWatch) If you're at least somewhat tech savvy, you're probably quite diligent by now about protecting your PC from malware threats. You run some form of antivirus software, and you are careful about installing suspicious software.

You might note be as guarded about your smartphone, though, and that's what gives malware purveyors a window of opportunity. It looks like some might be trying to take advantage.

Recently, antivirus experts like Symantec and Sophos have identified a real threat to Android phone users: A fake antivirus app that is designed to extort money from unsuspecting users.

The fake Android Defender app is not entirely unlike fake malware for the PC, like the faux Microsoft Security Essentials that tricked my dadsome time ago. If you install it, the app will display messages about viruses found on your phone and request a fee in order to "clean" your device. Of course, it does nothing of the kind; it's just extortion, pure and simple, to return control of your phone to you. If you don't pay, the app prevents you from using the phone in any way. The app can't be uninstalled, and it blocks access to all other apps. Says Symantec:

"We may soon see FakeAV on the Android platform increase to become a serious issue just like it did on computers. These threats may be difficult to get rid of once installed, so the key to staying protected against them is preventing them from getting on to your device in the first place."

The good news is that under ordinary circumstances, you can't install this app -- Android security settings block its installations unless you allow apps to be installed from "unknown sources." But if you have relaxed your phone's security, you're at risk and might want to reconsider the settings.

What can you do to stay safe?

Sophos recommends -- and honestly, this is the smart thing to do -- keeping your Android configured so it only installs apps from the Google Play store. Turn off the ability to download apps from "unknown sources."

Finally, we might be headed into an age when it's important to be running protection on our phones. Install security software on your phone. There are several options available, including apps from Symantec and Sophos.