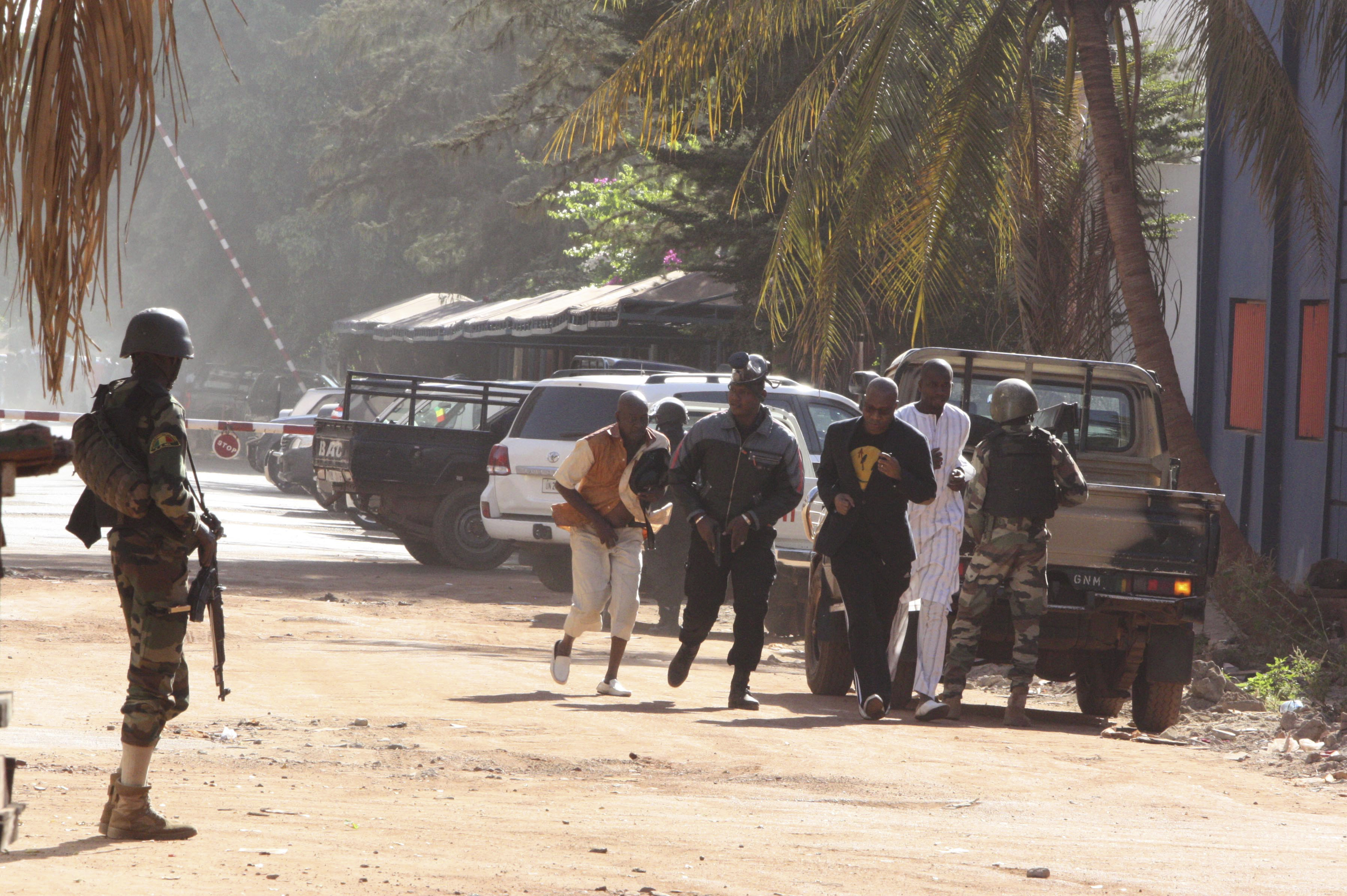 BAMAKO, Mali -- Islamic extremists armed with guns and grenades stormed the Radisson hotel in Mali's capital Friday, and security forces swarmed in to free guests floor by floor. As evening fell, officials said no more hostages were being held and that at least 20 people had been killed.

U.S. and French special operations forces assisted Malian troops in responding to the attack by an unknown number of gunmen. Shooting continued into the late afternoon, and a U.N. official said two attackers were dead.

Reflecting the chaos surrounding the siege, various death tolls were reported during the day. French Foreign Minister Jean-Yves Le Drian said 19 people died - 18 in the hotel and one Malian soldier killed in the fighting.

A U.N. official had earlier said initial reports put the number of dead at 27, but that different casualty figures have been reported and the organization is working with authorities to get an exact total. The official spoke on condition of anonymity because the operation was still ongoing.

It was not known if the two dead attackers were included in the U.N. count of the dead.

A group of gunmen continued to hold out against security forces, a Mali official told Reuters.

One American citizen was killed in the Mali attack, a U.S. official told CBS News' David Martin. U.S. officials also told CBS News that all 22 Defense Department military and civilian personnel in Bamako are accounted for.

"We are devastated that Anita is gone," the family said in a statement. "It's unbelievable to us that she has been killed in this senseless act of violence and terrorism."

The Washington Post reported that Datar has an elementary school-age son. CBS affiliate WUSA reported she was also a founding board member for Tulalens, an organization that connects under-served communities to health services.

Speaking at a regional summit in Malaysia, President Barack Obama said the assault was yet another reminder that the "scourge of terrorism" threatens many nations.

He said the "barbarity" shown by the attackers "only stiffens our resolve to meet this challenge."

Mr. Obama said the U.S. was working to account for Americans who may have been at the hotel. He also extended condolences to families of the victims, and thanked the security forces who responded.

CBS News correspondent Mark Phillips says the attack involved as many as 10 militants who -- according to a local army commander -- rammed into the hotel grounds in a vehicle, firing guns and using grenades. Witnesses said the attackers were shouting "Allahu Akbar," or "God is great," the jihadist battle cry.

Malian troops, backed by special forces from America and France, reacted quickly. As people ran for their lives near the luxury hotel along a dirt road, the soldiers in full combat gear pointed the way to safety. Within hours, local TV images showed heavily armed troops in what appeared to be a lobby area.

There were two members of U.S. special forces who happened to be visiting Mali, CBS News national security correspondent David Martin reports. One helped hostages away from the hotel and the other was in the Joint Operations Center. President Obama said he's monitoring the situation.

German Foreign Minister Frank-Walter Steinmeier said four of his country's citizens survived the siege unharmed. Also, a spokeswoman for Quebec's national assembly said an employee of the institution, Maxime Carrier-Legare, was among the freed hostages.

The guests at the sprawling, cream-and-pink colored luxury hotel, which has 190 rooms and features a spa, outdoor pool and ballroom, came from many countries. But the attack was perceived by many in France, particularly in the government, as a new attack on French interests, a week after the Paris attacks.

The attack unfolded one week after the attacks on Paris that killed 130 people.

Al Qaeda in the Islamic Maghreb (AQIM) and Al-Mourabitoun, the group run by Mokhtar Belmokhtar that carried out the attack on the sprawling gas plant in southeastern Algeria in January, issued a joint statment claiming responsibility for the siege.

They made the claim in a phone call to the Mauritanian news website Al-Akhbar, which regularly publishes statements by groups operating in West Africa.

Even before the claim, Ali Soufan, former FBI supervisory special agent, told "CBS This Morning" that (AQIM), could well be behind the assault, "because al Qaeda today definitely don't want to be upstaged by ISIS."

"They are in competition," said Soufan. "ISIS used to be part of al Qaeda. Al Qaeda is a poisonous tree and ISIS is just a branch of that tree. ISIS is a symptom of the diseases, al Qaeda is the disease."

The French military operation in Mali in 2013 against Islamic extremists who were holding the northern half of the country was the first of several foreign interventions that President Francois Hollande has launched as president. Those interventions have prompted increased threats against France and French interests from Islamic extremist groups from al Qaeda's North African arm to the Islamic State of Iraq and Syria (ISIS).

"This could be a strike at important French interests because the French government invested so much military energy in pushing the Islamic rebels out of Mali," said Jens David Ohlin, an international law expert at Cornell University in the United States. "While Mali might not have the same emotional significance to the French as Paris does, it is certainly an important part of the French military strategy."

Traore said at least one guest reported that the attackers instructed him to recite verses from the Quran before he was allowed to leave the hotel.

A handful of jihadi groups seized the northern half of Mali - a former French colony - in 2012 and were ousted from cities and towns by the French military intervention.

French President Francois Hollande said: "We should yet again stand firm and show our solidarity with a friendly country, Mali."

Monique Kouame Affoue Ekonde, from Ivory Coast, said she and six other people, including a Turkish woman, were escorted out by security forces as the gunmen rushed "toward the fifth or sixth floor."

"I think they are still there. I've left the hotel and I don't know where to go. I'm tired and in a state of shock," she said.

Belgian foreign minister Didier Reynders said that four Belgians were registered at the hotel but their whereabouts were unknown.

The U.N. mission said it was sending security reinforcements and medical aid to the scene. U.N. deputy spokesman Farhan Haq said some U.N. "quick-reaction forces" deployed to the hotel and are supporting Malian and other security forces. He said the United Nations had a few staff members in the Radisson hotel at the time of the attack but they are all safely out.

Ambulances were seen rushing to the hotel as a military helicopter flew overhead.

Northern Mali remains insecure and militant attacks have extended farther south this year, including the capital. In March masked gunmen shot up a restaurant in Bamako that is popular with foreigners, killing five people.

France has 3,500 troops operating in Mali and four other countries in the Sahel region as part of a five-nation counterterrorism operation codenamed Barkhane. The ministry did not specify how many soldiers have been sent to the Malian capital.

The Netherlands also has troops working with the UN mission in Mali. According to the Dutch defense ministry, some 450 Dutch military personnel are taking part in the mission along with four Apache and three Chinook helicopters. Most of the Dutch force is based in Gao, but there are a few officers at the U.N. mission headquarters in Bamako.