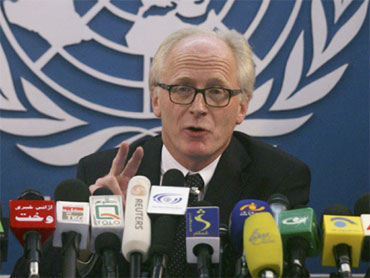 Taliban representatives held peace talks with Afghan government envoys at the end of January on a resort island in the Maldives, a spokesman for the president of the Indian Ocean nation said Wednesday.

The three-day talks were aimed at finding a peaceful solution to the ongoing Afghan war, but the Maldivian government was not directly involved with them, spokesman Mohamed Zuhair said.

Each side was represented by about a dozen people, Zuhair said, adding that there were "unconfirmed reports" that a U.N. official was also present.

The outgoing U.N. chief in Afghanistan, Kai Eide, reportedly met with Taliban representatives at the same time that the Maldivian meeting took place.

"Our government information is that they were meeting to seek a peaceful solution for the problems in their country," Zuhair told The Associated Press in a phone interview.

Among those representing the insurgents in the talks was the son of Gulbuddin Hekmatyar, Zuhair said. Hekmatyar is a notorious warlord and former Afghan prime minister who leads one of many insurgent groups fighting against foreign and Afghan troops in the country's east.

Zuhair said four Afghan lawmakers were part of the Afghan delegation, which also included a relative of famed anti-Taliban fighter Ahmad Shah Massoud, who was killed by al Qaeda two days before the Sept. 11, 2001, attacks in the U.S.

Zuhair said none of those participating were considered a security threat by the island nation.

Syamak Herawi, an Afghan government spokesman, confirmed the participation of the Afghan lawmakers, but denied direct government involvement in the talks.

The talks in this archipelago nation of nearly 1,200 islands were held ahead of a major conference on Afghanistan, which took place at the end of January in London. At the London meeting, Afghan President Hamid Karzai said he would call a peace conference with the aim of luring the Taliban fighters away from the battlefield.

While U.S. officials have endorsed plans to offer peace to low- and mid-level Taliban fighters, they remain skeptical of entering into deals with Taliban leaders, who harbored Osama bin Laden. The Taliban's refusal to hand over bin Laden after the Sept. 11 attacks triggered the Afghan war.