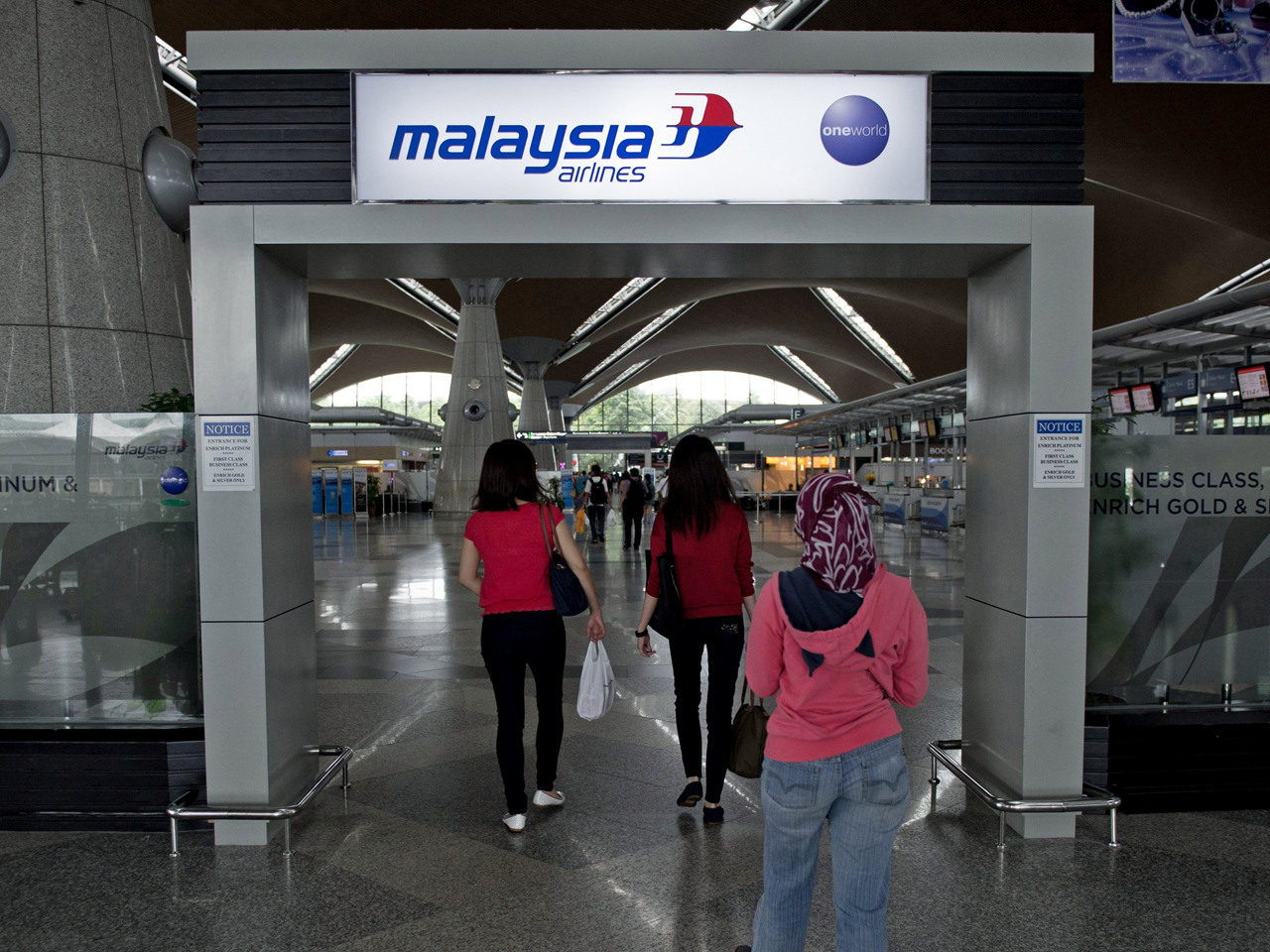 KUALA LUMPUR, Malaysia -- The search for the missing Malaysian jet pushed deep into the northern and southern hemispheres Monday as Australia scoured the southern Indian Ocean and China offered 21 satellites to respond to Malaysia's call for help in the unprecedented hunt.

French investigators arriving in Kuala Lumpur to lend expertise from the two-year search for an Air France jet that crashed into the Atlantic Ocean in 2009 said they were able to rely on distress signals. But that vital tool is missing in the Malaysia Airlines mystery because flight 370's communications were deliberately severed ahead of its disappearance more than a week ago, investigators say.

Malaysian authorities say the jet carrying 239 people was intentionally diverted from its flight path during an overnight flight from Kuala Lumpur to Beijing on March 8 and flew off-course for several hours. Suspicion has fallen on the pilots, although Malaysian officials have said they are looking into everyone aboard the flight.

Malaysian police confiscated a flight simulator from the pilot's home on Saturday and also visited the home of the co-pilot in what Malaysian police chief Khalid Abu Bakar initially said was the first police visits to those homes. But the government - which has come under criticism abroad for missteps and foot-dragging in their release of information - issued a statement Monday contradicting that account by saying police first visited the pilots' homes as early as March 9, the day after the flight.

Investigators haven't ruled out hijacking, sabotage, pilot suicide or mass murder, and they are checking the backgrounds of all 227 passengers and 12 crew members, as well as the ground crew, to see if links to terrorists, personal problems or psychological issues could be factors.

For now, though, Malaysian Defense Minister Hishammuddin Hussein said finding the plane was still the main focus, and he did not rule out finding it intact.

"The fact that there was no distress signal, no ransom notes, no parties claiming responsibility, there is always hope," Hishammuddin said at a news conference.

The Wall Street Journal has released a report saying "some senior U.S. officials believe that the plane may have been taken as part of a 'dry run' for a future terrorist attack, testing the ability to take a plane and hide it from radar and satellites."

Former Deputy Director of the CIA Mike Morell said it's a possibility, but it's unlikely someone would do something of this magnitude as a test.

"If you were able to get control of an aircraft, you would use it immediately," Morell said.

Malaysian Airlines CEO Ahmad Jauhari Yahya said an initial investigation indicated that the co-pilot, Fariq Abdul Hamid, spoke the fight's last words - "All right, good night" - to ground controllers. Had it been a voice other than that of Fariq or the pilot, Zaharie Ahmad Shah, it would have clearest indication yet of something amiss in the cockpit before the flight went off-course.

CBS News' Seth Doane rang the doorbell at Fariq's house over the weekend, but nobody answered. Neighbors told Doane they had seen police cars and motorcycles at the address. A CBS News crew tried Sunday to visit the gated community where Zaharie lives, but the crew was turned away by beefed-up security.

Malaysian officials earlier said those words came after one of the jetliner's data communications systems - the Aircraft Communications Addressing and Reporting System - had been switched off, sharpening suspicion that one or both of the pilots may have been involved in the plane's disappearance.

However, Ahmad said Monday that while the last data transmission from ACARS - which gives plane performance and maintenance information - came before that, it was still unclear at what point the system was switched off. That opened the possibility that both ACARS and the plane's transponders - which make the plane visible to civilian air traffic controllers - were severed later and at about the same time. It also suggests that the all-clear message delivered from the cockpit could have preceded any of the severed communications.

Jonah Blank, a senior political scientist at the RAND Corporation, told CBS News that that the "most intriguing question" for him was why the jetliner overflew two Malaysian Air Force radar stations.

"To me," Blank said, "that suggests at least one of the pilots was trying to scramble jets to intercept."

Although Malaysian authorities requested that all nations with citizens aboard the flight conduct background checks on them, it wasn't clear how thoroughly they were conducting such checks at home. The father of a Malaysian aviation engineer aboard the plane, Mohamad Khairul Amri Selamat, 29, said police had not approached anyone in the family about his son, though he added that there was no reason to suspect him.

"It is impossible for him to be involved in something like this," said the father, Selamat Omar, 60. "He is a good boy ... We are keeping our hopes high. I am praying hard that the plane didn't crash and that he will be back soon."

Malaysia's government in the meantime sent out diplomatic cables to all countries in the search area, seeking more planes and ships for the search, as well as to ask for any radar data that might help narrow the task.

Some 26 countries are involved in the search, which initially focused on seas on either side of peninsular Malaysia, in the South China Sea and the Strait of Malacca.

Over the weekend, however, Malaysian Prime Minister Najib Razak announced that investigators determined that a satellite picked up a faint signal from the aircraft about 7 1/2 hours after takeoff. The signal indicated the plane would have been somewhere on a vast arc stretching from Kazakhstan down to the southern reaches of the Indian Ocean.

There has been no sign of debris and crews are left combing waters that, on average, run more than two miles deep.

CBS News contributor and former head of the National Transportation Safety Board Mark Rosenker said, "(It's) very challenging for those who are doing this. Very frustrating for the investigators, very, very disturbing that we didn't have good information early on, and this is not the way to run a very serious aviation accident investigation."

Hishammuddin said Monday that searches in both the northern and southern stretches of the arc had begun, and that countries from Australia up north to China and west to Kazakhstan had joined the hunt.

Had the plane gone northwest to Central Asia, it would have crossed over countries with busy airspace, and some experts believe it more likely would have gone south, although Malaysian authorities are not ruling out the northern corridor and are eager for radar data that might confirm or rule out that path.

The northern corridor crosses through countries including China, India and Pakistan - all of which have said they have seen no sign of the plane. China, where two thirds of the passengers were from, is providing several planes and 21 satellites for the search, Premier Li Keqiang said in a statement.

"Factors involved in the incident continue to multiply, the area of search and rescue continues to broaden, and the level of difficulty increases, but as long as there is one thread of hope, we will continue an all-out effort," Li said.

"Australia will do its duty in this matter," Abbott told Parliament in Australia. "We will do our duty to the families of the 239 people on that aircraft who are still absolutely devastated by their absence, and who are still profoundly, profoundly saddened by this as yet unfathomed mystery."

The southern Indian Ocean is the world's third-deepest and one of the most remote stretches of water in the world, with little radar coverage.

Planes will be searching for any signs of the kind of debris that might float to the surface in a crash. Ahmad, the Malaysia Airlines CEO, said the plane had no unusual cargo, though he said it was carrying several tons of mangosteens, a purple tropical fruit.