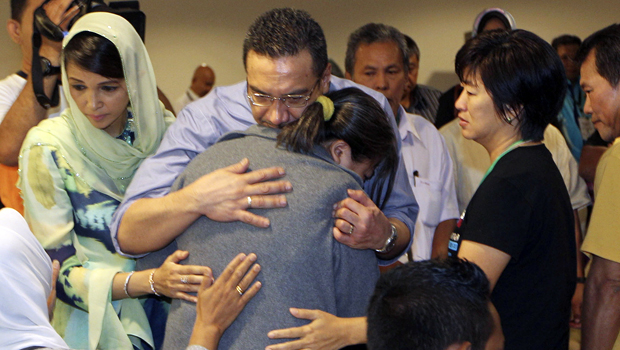 PERTH, Australia -- A Chinese aircraft flying over the search zone for Malaysia Airlines Flight 370 on Saturday spotted several objects floating in the sea, including two bearing colors of the missing plane, but it was not immediately clear whether they were related to the investigation, officials said.

Malaysian Defense Minister Hishammuddin Hussein told reporters near Kuala Lumpur after meeting several families of passengers on the plane that there was no new information on the objects spotted Friday, which could just be just sea trash or could be from the jetliner, which went missing three weeks ago.

"I've got to wait to get the reports on whether they have retrieved those objects. ... Those will give us some indication," said Hishammuddin, who was accompanied by his wife and children as he visited the relatives at a hotel in Putrajaya, Malaysia.

CBS News correspondent Holly Williams reports from Perth, the nerve center of the multi-nation search effort, that the weather had taken a turn for the worse Saturday, which could slow down the search.

Relatives and friends of the passengers said they were tortured by the uncertainty over the fate of their loved ones, as they wait for hard evidence that the plane had crashed.

"This is the trauma of maybe he's dead, maybe he's not. Maybe he's still alive and we need to find him. Maybe he died within the first hour of the flight, and we don't know," Sarah Bajc, the American girlfriend of U.S. passenger Philip Wood, said in Beijing.

"I mean, there's absolutely no way for me to reconcile that in my heart," she said.

The Australian Maritime Safety Authority said that objects cannot be verified or discounted as being from Flight 370 until they are relocated and recovered by ships. "It is not known how much flotsam, such as from fishing activities, is ordinarily there. At least one distinctive fishing object has been identified," the agency said.

The three objects spotted by the Chinese plane Saturday were white, red and orange in color, the Xinhua report said. White and red were among the colors on the outside of the missing Boeing 777.

An image captured a day earlier by a New Zealand plane showed a white rectangular object floating in the sea, but it was not clear whether it was related to the missing jet or was just sea trash.

Flight 370 disappeared March 8 while bound from Kuala Lumpur to Beijing, and investigators have been puzzled over what happened aboard the plane, with speculation ranging from equipment failure and a botched hijacking to terrorism or an act by one of the pilots.

The latter was fueled by reports that the pilot's home flight simulator had files deleted from it, but Hishimmuddin said checks, including ones by the FBI, turned up no new information.

"What I know is that there is nothing sinister from the simulators, but of course that will have to be confirmed by the chief of police," he said.

Newly analyzed satellite data shifted the search zone on Friday, raising hopes searchers may be closer to getting physical evidence that that the plane crashed in the Indian Ocean with 239 people aboard.

That would also help narrow the hunt for the wreckage and the plane's black boxes, which could contain clues to what caused the plane to be so far off-course.

The U.S. Navy has already sent equipment that can detect pings from the back boxes, and Australian Prime Minister Tony Abbott told reporters in Sydney that the equipment would be put on an Australian naval ship soon.

"It will be taken to the most prospective search area and if there is good reason to deploy it, it will be deployed," he said, without giving a time frame. Other officials have said it could take days for the ship - the Ocean Shield - to reach the search area.

The newly targeted zone is nearly 700 miles northeast of sites the searchers have crisscrossed for the past week. The redeployment came after analysts determined that the Boeing 777 may have been traveling faster than earlier estimates and would therefore have run out of fuel sooner.

Search planes were sent out Saturday from Perth, Australia, in a staggered manner, enabling at least one plane to be over the area for most of the daylight hours. The new search area is closer to Perth than the previous one, with a flying time of 2 1/2 hours each way, allowing for five hours of search time, according to the Australian Maritime Safety Authority.

AMSA said five P-3 Orions - three from Australia and one each from Japan and New Zealand - plus a Japanese coast guard jet, the Chinese Ilyushin IL-76, and one civilian jet acting as a communications relay, took part Saturday.

Abbott said the job of locating the debris was still difficult. "We should not underestimate the difficulty of this work - it is an extraordinarily remote location."

If investigators can determine that the plane went down in the newly targeted zone - which spans about 123,000 square miles, roughly the size of Poland - recovery of its flight data and cockpit voice recorders could be complicated.

Much of the sea floor in the area is about 6,600 feet below the surface, but depths may reach a maximum of about 19,700 feet at its easternmost edge.

The hunt for the plane focused first on the Gulf of Thailand, along the plane's planned path. But when radar data showed it had veered sharply west, the search moved to the Andaman Sea, off the western coast of Malaysia, before pivoting to the southern Indian Ocean, southwest of Australia.

That change was based on analysis of satellite data. But officials said a reexamination and refinement of that analysis indicated the aircraft was traveling faster than previously estimated, resulting in increased fuel use and reducing the possible distance it could have flown before going down. Just as a car loses gas efficiency when driving at high speeds, a plane will get less out of a tank of fuel when it flies faster.