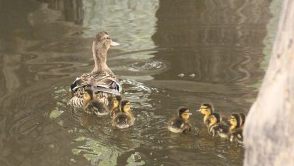 FAIRFIELD, Calif. - A mother duck and her ducklings found trying to cross a busy road near are back in the wild after a harrowing journey.

International Bird Rescue told CBS Sacramento said it got a call Saturday about a mallard duck and her eight ducklings trying to brave a four-lane boulevard near the Sears Auto Center in Fairfield just off of Interstate 80. Auto shop workers were worried that the duck and her clutch wouldn't survive their trip across the busy road.

Both local animal control officers and an International Bird Rescue volunteer responded to the scene are were able to catch the mother and the ducklings.

Apparently, it wasn't the mother duck's first human encounter. A federal band was found on the duck's leg, indicating that she had been rescued before. Interestingly, as officials found out, the mother duck had tried to take on traffic before with another batch of ducklings.

The mother duck and her new batch of ducklings have now been relocated to an undisclosed rural area.