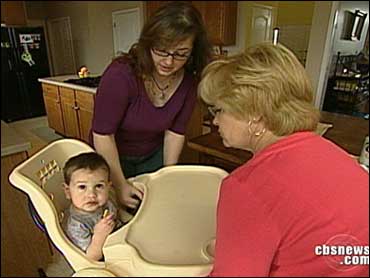 Meet the members of the Young residence in New Jersey.

There's mom, dad, 7-year old Bailey, Jack, who is a year and four months, their pugs Phaedra and Fidget, and the newest member - Grandma.

"I'm here to help them," said grandma Christy Fogarty. "They're helping me, and I'm helping them. That's the way I feel it is."

Fifty-nine-year-old Fogarty was working as a customer service supervisor and her planned retirement was a few year away, reports CBS News correspondent Seth Doane. That all changed when she was laid off in December.

"Ever since I was young - you know - a young mom, I've been able to support myself," said Forgarty, getting choked up. "And now I can't."

The money wasn't there to keep her house. Her daughter, Lynette Young, was ready to help.

"I was geared up in my head to have this like big discussion with my husband and 'this is why my mom should move in with us,' and he just goes, 'I think your mom needs to come live with us,' and I was shocked," said Young.

"How is it with everyone living under one roof?" Doane asked Dave Young.

"Surprisingly, it's been a lot easier than we initially thought it was going to be," Dave Young said.

And it's not uncommon. Multigenerational households have increased from 5 million in 2000 to more than 6 million in 2008, according to AARP.

Amy Goyer, with grandparents.com, said that people are very worried about their retirement savings. The site recently polled their 50,000 members and found that 65 percent say "economic challenges" will fuel the trend towards multigenerational households like the Youngs.

"Families have traditionally lived together in this country and in many countries," said Goyer. "But what we see is that it's too expensive to live on your own."

Homebuilders like Toll Brothers are even targeting that market, specifically advertising multi-generational living.

A recent survey of architects found that more than 60 percent expect to see increased demand for homes with a second master suite on the first floor, perfect for grandparents.

For Fogarty, the transition from having a home of her own to a room at her daughter's house has been difficult.

"I'm just not used to not having my own place," she said.

But they support she provides to Lynette and Dave has proved invaluable.

"It almost takes two moms to run this house, because it's kind of crazy," Lynette Young said.

Now Fogarty will have a chance to teach Jack and Bailey the values she taught to her own two children.

"I learned from my mom, you know, that family takes care of family no matter what," Fogarty said. "And I am proud when I look at my daughter Lynette, that that's what she learned."

In the toughest times, family is the safest investment.