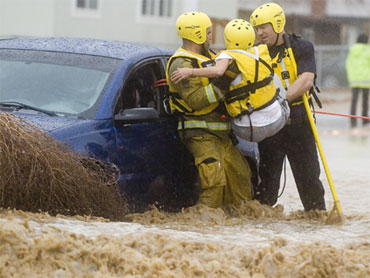 California continues to be pounded by a seemingly endless series of storms, with heavy rain, snow and high winds, prompting evacuations and leaving thousands without power.

And the heaviest rain, may be yet to come.

CBS News correspondent Ben Tracy reports wave after wave of rain hitting the state. Residents in La Canada are hoping the sandbags will hold any water or mud that might slide down these already saturated hills. There's reason to be concerned. More rain (a lot of it) is on the way.

For five days now the rain has just kept coming and coming.

"We haven't seen anything quite like this in a matter of years, actually," said KCAL meteorologist Evelyn Taft.

Already twelve inches have fallen in parts of Santa Barbara County, a foot of rain in one week. They could get ten more inches by Thursday.

The One Slip-Up at the Obama's State Dinner

Keep Your Pet From Panting

In the city of Los Angeles, five inches of rain so far. By tomorrow night, L.A. may have gotten half of its yearly rainfall - in just six days.

So far the creeks have held. Surprisingly there's been no major flooding, but rockslides have closed several roads, including the Pacific Coast Highway, shut down ten miles in both directions.

The fear is the monster storms still lined up off the coast.

"We're anticipating that we're going to have a lot of work," said Gustavo Ortega of the California Department of Transportation.

Tracy says that, after a week of rain, what's expected tonight is like a "fireworks finale" - heavy rain, lots of wind, and quite a bit of thunder and lightning.

And then this monster storm will be heading east.

Also in San Bernardino County, a woman was rescued from her pickup truck Monday night after being swept away in rain-swollen Lytle Creek in the San Bernardino National Forest.

Flooding also was reported in Trabuco Canyon in Orange County.

Nearly 21,000 Southern California Edison customers were without power late Monday due to the storm, said Edison spokeswoman Vanessa McGrady. The hardest-hit area was the city of Torrance, south of Los Angeles, with more than 4,600 outages. She said crews would be working throughout the night to restore service.

Unaccustomed to driving and dressing for so much rain, Southern California residents tried to go about their business - creeping on the freeways, dodging puddles downtown and doing last minute holiday shopping.

While adults grumbled, children didn't seem to mind the rain. Grade-schoolers in rubber boots splashed in the downspouts and pre-teens pretended to be too cool for rain gear.

"I love the rain because we get to stay in during gym class and watch movies. And at lunchtime, the kids run outside and come back all soaked and try to hug you," said 12-year-old Amy Becerra said as she bounced up and down and giggled.

Her mother, Nancy, who was struggling with an umbrella, disagreed. She complained that the constant rain was "depressing," kept her inside all weekend and made driving scary.

About 40 residents of the San Joaquin Valley farming community of McFarland were briefly evacuated Monday morning.

Elsewhere, a small twin-engine airplane was reported missing on a 65-mile flight from Palm Springs to Chino. Federal Aviation Administration spokesman Ian Gregor says a wreckage was found near Lake Perris but investigators won't be certain that it's the missing plane until they can get to the scene on Tuesday, if weather permits.

Residents of La Canada Flintridge were among those keeping a wary eye on the rain after a 250-square-mile wildfire last year denuded a large swath of the San Gabriel Mountains. More than 40 homes in the foothills just north of Los Angeles were damaged or destroyed by a mudslide in February.

And in areas scorched by recent wildfires it won't take much more rain for the saturated ground to finally turn into rivers of mud.