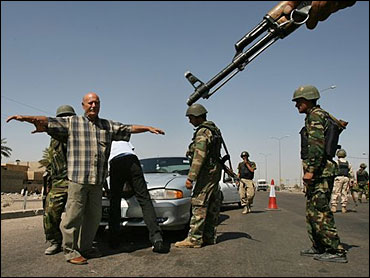 Government forces fanned out across Baghdad on Wednesday, setting up checkpoints, frisking motorists and causing huge traffic jams on the first day of the largest security operation in Iraq's capital since Saddam Hussein's ouster three years ago.

President Bush, back in Washington after a surprise visit to Iraq, said the crackdown offered the promise of reducing the violence that has plagued the capital.

The only reported clash between army troops and gunmen in Baghdad occurred just before noon in the Azamiyah neighborhood, when heavy exchanges of gunfire shattered the late morning quiet and sent residents, including women and children, scurrying for cover.

Many stores were shut in Azamiyah and Dora, both strongholds of the Sunni Arab insurgency. Entire streets looked virtually deserted in Dora, including one residents have dubbed "death road" because of the frequent clashes there between insurgents and police.

"If this security plan really works, then perhaps I will be encouraged to go out of my neighborhood," Mohammed Yehia, a 30-year-old father of two, said at the marble-tiled plaza outside the Grand Imam Abu Hanifa mosque in Azamiyah.

Yehia said fears of being killed by Shiite militants have prevented him from venturing out of Azamiyah since the Feb. 22 destruction of a revered Shiite shrine — an attack which unleashed the worst and longest bout of sectarian violence since Saddam's ouster.

"It has been three years," said Yehia, who makes a living doing odd jobs at the Grand Imam mosque. "We have had enough. We are all yearning for normal lives."

Operation Forward Together, involving 75,000 Iraqi army and police forces backed by U.S. troops, began at a crucial time — one day after Mr. Bush visited Baghdad to reassure Iraqis of Washington's continued support and exactly a week after the death of terror leader Abu Musab al-Zarqawi.

It was also the first major action by Prime Minister Nouri al-Maliki since his new government of national unity was sworn in on May 20, and a week after he gained the consensus he needed from Iraq's ethnic and sectarian groups to fill three key posts — defense, interior and national security.

Tackling Baghdad's tenuous security has been the aim of several past counterinsurgency operations — including one a year ago. That operation, code-named Lightning, failed to have any impact on the bombings, shootings and killings that have become daily fare in Baghdad.

Al-Maliki pledged Wednesday not to negotiate with those who had shed innocent blood, the latest in a series of tough statements he has made since American bombs killed al-Zarqawi, the leader of al Qaeda in Iraq.

But it remains to be seen whether al-Maliki, a veteran politician with years of experience as an opposition activist in exile, can back up his uncompromising rhetoric with action.

In a Rose Garden news conference barely more than six hours after his return from Baghdad, a buoyant Mr. Bush insisted that U.S. troops would stay until Iraqi forces can do the job on their own.

"If we stand down too soon, it won't enable us to achieve our objectives," the president said. He said those goals include an Iraq that can govern, sustain and defend itself.

Unlike al-Maliki, not everyone in Baghdad was welcoming of Bush.

In a bid to retain unity, al-Maliki sought to reassure Sunni Arabs that Operation Forward Together would not indiscriminately target their community, which forms the backbone of the insurgency.

Sunnis were deeply angered in May 2005 by what they considered heavy-handed tactics during Operation Lightning, which they said concentrated on their neighborhoods. More than 40,000 Iraqi police, soldiers and U.S. troops took part in that operation.

"We are only going to attack areas that are dens for terrorists," al-Maliki said.

Launching the operation in a televised news conference, al-Maliki said he was prepared to open talks with insurgent groups opposed to Iraq's U.S.-backed peace process. But he made clear that his offer was conditional on unspecified "guarantees" and excluded terrorist groups.

He also offered an amnesty to security detainees found not to have been involved in violence as part of a national reconciliation initiative he planned to detail later this week.

The security crackdown in Baghdad includes a curfew extended by 4½ hours — from 8.30 p.m. until dawn — and a weapons ban. The government did not say how long the crackdown would last and declined to give precise numbers about checkpoints and troops.

Truckloads of army and police forces roamed the city, with guns at the ready. Some tunnels were closed to traffic, which was restricted in some areas to one lane to give the troops better control. The higher number of checkpoints caused worse-than-usual traffic jams in the city of about 6 million people. Long lines outside gasoline stations compounded the congestion.

U.S. troops patrolled parts of Baghdad in convoys of up to four Humvees, but used the more heavily armored Bradley fighting vehicles in Dora, possibly Baghdad's most dangerous district.

In the central and mainly Shiite Karradah area, scene of a series of deadly car bombs in the past week, Iraqi army troops patrolled on foot, while others were deployed at main intersections in pickup trucks with mounted machine guns.

Col. Ghasan Mohammed, the local army commander, said the clash in Azamiyah broke out when insurgents opened fire and tossed a grenade at an army patrol. He had no word on casualties.

Smoke soon started to rise from the area and police diverted traffic away from Azamiyah, sending scores of motorists into secondary streets. But many of those roads were blocked by palm tree trunks and car hulks — the work of vigilante groups that have sprung up recently.