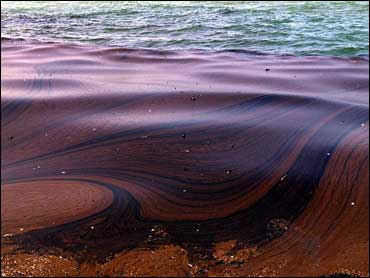 An oil spill discovered earlier this month in Alaska's Prudhoe Bay was the largest ever on the North Slope, according to an official estimate released Friday.

"I can confirm it's the largest spill of crude oil on the North Slope that we have record of," said Linda Giguere with the state Department of Environmental Conservation. The state has kept comprehensive records of oil spills for a decade, with more cursory record-keeping dating to the 1970s, when the trans-Alaska oil pipeline was built.

The estimate was based on a survey conducted this week at the site operated by BP Exploration (Alaska) Inc. where the leak was discovered March 2.

The source of the spill was a quarter-inch hole apparently caused by corrosion inside the three-mile line that leads to the trans-Alaska oil pipeline.

To date, workers have recovered 52,920 gallons of crude. The effort has been slowed in recent days by extreme cold; the wind chill factor dipped to more than 70 degrees below zero. But Giguere said the spill was relatively well contained, covering less than two acres.

"It's a significant spill. The volume is large, but the footprint is small," Giguere said. "It's contained and controlled, which is the really good news. Morale is high, despite the cold temperatures and harsh conditions."

BP's plant is about 650 miles north of Anchorage. Full production is not expected to resume for at least two weeks, BP spokesman Daren Beaudo said earlier this week.

The North Slope is the region between the Brooks Range and the Arctic Ocean and contains most of Alaska's petroleum reserves.