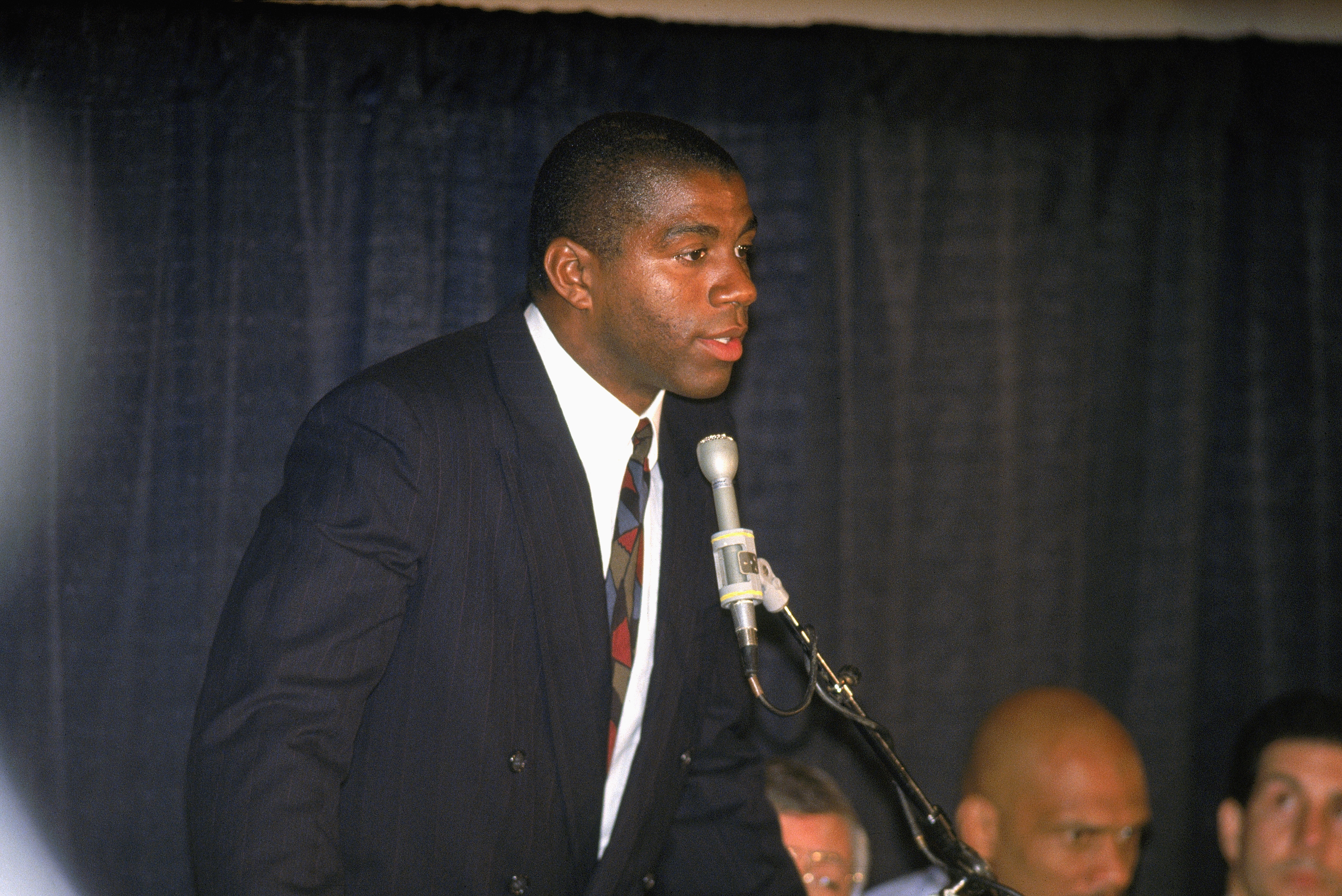 Magic Johnson became the face of HIV/AIDS 22 years ago when he announced to the world he would have to retire from the Los Angeles Lakers immediately to battle the disease. He had no idea at the time what kind of impact his press conference would have.

“I didn’t know it was going to be such big news around the world,” Johnson recalled to CBSNews.com Nov. 19 in an interview. “The strides that we’ve made in 22 years -- I’ve been all over the world talking about it… but also a lot of people have died since then. So we’re still in a big fight.”

Johnson learned he was HIV-positive more than two decades ago after the Lakers tested him because of an insurance policy that had been taken out on the NBA superstar. The team was playing an exhibition game in Utah before the start of the 1991 season, when team doctor Dr. Michael Mellman summoned the NBA superstar back to Los Angeles because of his blood results. That's when he learned his life-changing diagnosis.


“I was just devastated, blown away,” Johnson recalled to CBSNews.com. “We have to remember at that time, people were really dying of AIDS. I was just scared to death.”

Soon his medical care would be handled by Mellman and Dr. David Ho, one of the top HIV researchers in the country at the time. Ho told the NBA star that new drugs were coming down the pipeline and he was going to be okay.

But, it wasn’t until he met AIDS activist Elizabeth Glaser shortly after his diagnosis that the message set in. Johnson says she was the one "who really saved his life."

She eased the minds of Johnson and his wife Cookie, answering any question they had and describing daily life to them in ways doctors without the disease couldn't. Glaser’s HIV had already progressed to AIDS, and she urged Magic to go public and become an HIV activist.

“The one thing she did say was I was going to live for a long time. And the thing that she asked me to do was become the face of the disease,” he said. "She felt it was really important that I go public to help a lot of other people who were living the same lifestyle who didn’t know they had HIV and needed to get tested.”

“And she was absolutely right,” said Johnson.

That mission is what brought the NBA Hall of Famer to Harlem’s legendary Apollo Theater in New York City in November. Johnson was at a panel event sponsored by Orasure’s OraQuick at-home HIV test to raise awareness about testing in the black and Hispanic communities, two groups of Americans most disproportionately affected by new HIV infections today.

The event was held ahead of World AIDS Day December 1, a United Nations-recognized awareness day which kicked off in 1988 to urge people to get tested for HIV.

About 1.1 million Americans are living with HIV, according to federal estimates, with almost one in five unaware of their infection.

Despite representing only 12 percent of the population, black Americans account for about 44 percent of new HIV infections each year. They are also more likely to die from the disease.

Hispanic Americans are also more likely to die from HIV than white Americans. According to the Centers for Disease Control and Prevention, Hispanics make up 21 percent of new infections each year.

In his community, Johnson pointed to problems with denial, stigma and misinformation. he said more needs to be done not to outcast those with HIV, -- a discrimination he has not experienced firsthand, so he wonders why it still occurs in his community.

The outreach efforts of his Magic Johnson Foundation target households, schools and black churches to spread the message of safe sex, getting tested so everyone knows their HIV status, and acceptance of those with the disease.

“In the black community, unfortunately, we’re still in denial that it can happen to us. We haven’t done a wonderful job of raising the awareness level or educating our people. Its gotten better since I announced 22 years ago, but it needs to get much better,” he said.

"We have to drive people to get tested, because that's the most important thing," he added. “The stigma and fear of knowing their status" is holding people back.

And so is misinformation. Johnson has lamented for years in interviews how his great health since his diagnosis may have gotten some to become complacent about getting tested or treated for HIV.

He’s heard the rumors that “Magic’s taking magical drugs” or gets treatment most people can’t afford. He calls such rumors false, saying he takes the same three medications available to everyone else. His good health, he says, is from taking his pills daily and following all doctors’ instructions to live a healthy lifestyle.

“That’s why early detection is such a key," said Johnson. “You should want to know your status and we can put you on some drugs. You can live a long time and a healthy life like I am.”

AIDS.gov has more information on World AIDS Day and getting tested.