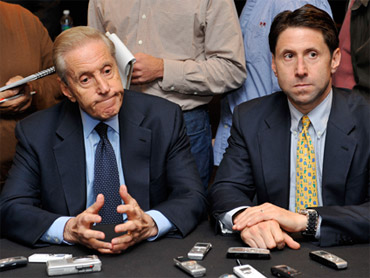 NEW YORK - The owners of the Mets turned a blind eye to Bernard Madoff's massive fraud, reaping $300 million in false profits and using a large chunk to run the team, according to a lawsuit unsealed Friday.

The lawsuit claims the owners were so dependent on the disgraced financier's too-good-to-be-true returns that it "faced a severe and immediate liquidity crisis" when Madoff's crimes were revealed in 2009.

The searing allegations were made by Irving Picard, the trustee appointed to recover funds for investors burned by Madoff's scheme. The suit filed by Picard in federal bankruptcy court in Manhattan names Sterling Equities, along with its partners and family members, including Met owner Fred Wilpon, team president Saul Katz and chief operating Jeff Wilpon, the owner's son.

"Given Sterling's dependency on Madoff, it comes as no surprise that the partners willfully turned a blind eye to every red flag of fraud before them," Fernando A. Bohorquez, Jr., a lawyer representing Picard, said Friday.

The suit had been filed under seal in December while the parties tried to work out a settlement. But lawyers told a judge this week that talks had collapsed and consented to having the complaint made public.

Its opening salvo: "There are thousands of victims of Madoff's massive Ponzi scheme. But Saul Katz is not one of them. Neither is Fred Wilpon."

The complaint alleges the partnership "received approximately $300 million in fictitious profits" from hundreds of accounts opened with Madoff's firm. Of that, it says, $90 million of "other people's money" were withdrawn to cover day-to-day operations of the Mets.

Wilpon and Katz fired back Friday with a statement calling the suit "an outrageous strong-arm effort to force a settlement by threatening to ruin our reputations and businesses we built for over 50 years."

The pair called the accusations "abusive, unfair and untrue," insisting they were victims of the fraud.

"We should not be made victims twice over - the first time by Madoff and again by the trustee," they wrote.

The suit has cast a cloud over the Mets ownership, which has said it's exploring a partial sale of the team. But Wilpon and Katz denied Friday that the operation was ever dependent on Madoff.

"That is complete nonsense," they said. "We have good, sound businesses that were successful years before we invested with Madoff, including both real estate and the New York Mets."

Madoff, 72, is serving a 150-year sentence in a federal prison in North Carolina after admitting that he ran his scheme for at least two decades, using his investment advisory service to cheat individuals, charities, celebrities and institutional investors.

Losses are estimated at around $20 billion, making it the biggest investment fraud in U.S. history.

It says Sterling Partners "willfully disregarded any criticisms of Madoff and simply buried their heads in the sand" during a nearly quarter-century relationship in which it supported its substantial business empire with Madoff money and reaped the benefits of bogus profits.

The firm was "simply in too deep ... to do anything but ignore the gathering clouds," the lawsuit says. "In the face of the parade of red flags, the Sterling Partners chose to do nothing."

Numerous financial industry professionals over the years warned Sterling about Madoff and speculated that he was operating a fraud, including one Sterling consultant who advised Saul Katz in 2003 that he "couldn't make Bernie's math work and something wasn't right," the court papers say.

The lawsuit says Sterling was on notice as early as 1991 that Madoff's firm was audited by a three-person operation in Rockland County, N.Y., that consisted of a certified public accountant, a semiretired accountant and an assistant.

In 1996, it says, multiple banks refused to serve as custodian of Sterling's 401K plan because of concerns about Madoff's lack of transparency and inability to provide daily account balance information.

At one point after several financial news publications raised questions about the Madoff business in May 2001, Sterling considering getting fraud insurance that would have included a Ponzi scheme but Sterling ultimately rejected the insurance because coverage limits meant most of their money was uninsurable, according to the court papers.

The lawsuit said Sterling's Madoff accounts produced positive returns during the Black Monday stock market crash of 1987, the bursting of the dot-com bubble in 2000, the terrorist attacks of Sept. 11, 2001, and the recession and housing crisis of 2008.

"Remarkably, Sterling's (Madoff) investments were effectively immune from any number of market catastrophes, enjoying steady rates of return even during events that otherwise devastated financial markets," the lawsuit says.